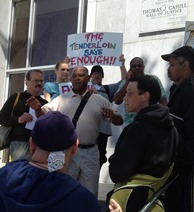 A delegation of 30 Tenderloin residents and workers went to the Hall of Justice on May 30 to deliver petitions including over 1500 signatures to SFPD Chief Greg Suhr. As BeyondChron reported yesterday, people were lining up for nearly two weeks to sign the petitions, which invited Suhr to visit the Tenderloin to get a first-hand view of the need for more police and to then announce whether he was satisfied with neighborhood safety. As a small delegation proceeded to Suhr’s office to deliver the petitions and set a date for the Chief’s tour, the crowd outside expressed anger over the SFPD’s steep reductions in the number of Tenderloin officers (24% vs. 12% citywide). It also waved signs embodying the Tenderloin’s message toward ongoing public drug dealing on its sidewalks: “Enough!” As one resident put it, “If this happened in front of City Hall, it wouldn’t be tolerated.”

It was quite a scene on the steps of the Hall of Justice on May 30, as Tenderloin residents were demanding answers to uncomfortable questions about city police policies. As Reggie Reed, put it, “City-wide, there was a 12% cut in police staffing since 2010. The Tenderloin had a 24% cut. Why is that? I live in the Tenderloin and there is open-air drug dealing, there are robberies, but there are [also] 4,000 children in the Tenderloin. We are here today to deliver these 1,500 signatures to Chief Suhr because we want him to tour our neighborhood and talk to residents. I’m tired of this.” Asking, “Aren’t you fed up?!” Reed earned a healthy roar of agreement from the crowd.

The statistics Reed quoted were provided upon request from the SFPD Residents were clear, however, that they are not just asking for “tough on crime” responses from police. C.W. Johnson, a Tenderloin resident, reminded police that residents want care, not arrests, for those living with mental and physical disabilities, addictions, and other struggles. “We want community policing,” he said.

In fact, the petition is perhaps most notable because it refutes the common-place narrative that residents of the Tenderloin do not care about the state of public safety. It’s just not true. With over six major media outlets covering this story, the Chief and the city no longer have an excuse to ignore the fact that there are families, seniors, individuals with disabilities, and children in the Tenderloin who face particular safety issues living in the Tenderloin.

Police officials have repeatedly told community groups that more officers will arrive in the form of graduating academy classes, who can free up more experienced officers to be on patrol. However, even if this promise comes through, it does not account for the SFPD’s method of de-prioritizing police staffing to the Tenderloin station when allocating assignments throughout the city.

Tenderloin residents also ask why Chief Suhr did not have to wait for academy classes before recently increasing patrol officers from 14 to 22 on the Mid-Market corridor. This increase was justified, but so is a similar addition of officers to the equally high-crime Tenderloin; the Market Street increase undermines Suhr’s repeated claims that there are not enough resources to go around.

No one can deny that police time, energy, and man power are scarce commodities. However, it is time to take another look at staffing distributions in light of the needs in each community. San Francisco has many wonderful police officers, and residents of the Tenderloin want to ensure that they have the support they need to meet the challenges of community policing in the Tenderloin.

Chief Suhr “In a Meeting”

Chief Suhr was not available to meet with the delegation. His staff said he was “in a meeting.” Also “in a meeting” were all top SFPD officials under Suhr.

When asked by CCSRO Director Pratibha Tekkey when they could expect to get a response from Suhr to the request he tour the Tenderloin, his staff said it “would not be quick.” Yet on the preceding day Suhr told BeyondChron Editor Randy Shaw that he was “always down in the Tenderloin.”

The Tenderloin delegation hopes to hear back from Suhr soon, and believes as strongly as ever that the SFPD must devote the resources necessary to provide a level of safety that the many children, seniors and disabled residents of the Tenderloin, as well as all other residents, deserve.