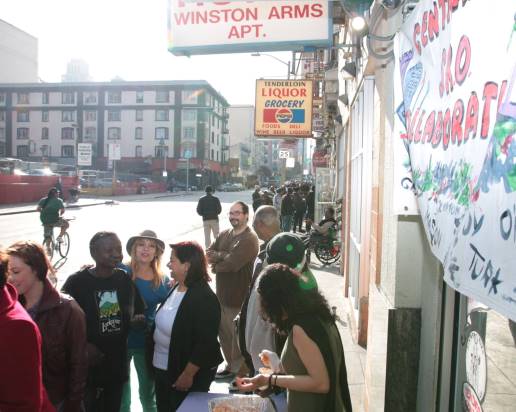 On Friday, June 26 the San Francisco Trans March will end its route at Turk and Taylor for a ribbon cutting to celebrate the Board of Supervisor’s decision to rename the 100 block of Turk Street after Vicki Marlane, a legendary drag performer and the first transgender woman to receive such an honor.

This celebration of this part of the Tenderloin is a welcome one, particularly for the neighboring unit block of Turk and stretches of Taylor, Eddy, and Mason that surround it. We have written before about community efforts to improve safety for the families and often vulnerable or elderly adults who live in the area. In February of this year the Central City SRO Collaborative (CCSROC) fought to remove parking on the unit block of Turk to address the pernicious drug dealing that has dominated the block for decades. (Full disclosure, we work on that block.) Residents and workers on the block reported feeling safer and preferring the block without parking, although it did not eliminate the crowds of individuals dealing drugs.

The no-parking policy is still in place on the block but, in March, a shooting at Turk and Taylor left eight wounded. This prompted the mayor’s office to convene a task force of city agencies involved with lower Turk,  which in turn led Chief Greg Suhr to install a fixed-post officer on that corner. The block has been virtually barren since that time—but that has not solved the problem of drug dealers preying on residents and of individuals inciting violence, merely relocated it.

Some of those dealing and using drugs who formerly spent time on Turk Street have simply moved onto the 100 block of Eddy Street. This is a challenge for the numerous community groups, residential hotels and businesses on Eddy. More drug activity is also evident on the unit block of Mason Street and on the 100 block of Taylor Street.

Despite these challenges, the businesses and organizations on these blocks have not sat idle. The CCSROC hosts block parties in the afternoon on the last Tuesday of each month outside their office at 48 Turk. June marks the ninth month of this effort to bring a warm and welcoming atmosphere to the block. CounterPulse, a performing arts organization that will soon begin construction on a new theater at 80 Turk, and Tenderloin Neighborhood Development Corporation’s organizing division at 149 Taylor also joined the fun on Tuesday, June 24th. Both set up tables outside of their respective spaces and passed out materials about performances and opportunities for civic engagement, respectively.

La Tonya Jones, a tenant organizer with the Central City SRO Collaborative helps to facilitate and set up for the monthly block parties. “Usually there’s such a crowd of people you can’t even see the storefronts on the street—this way, people come and interact with us and learn about what we have to offer. I love doing it.” Participation in the effort has also included local businesses such as PianoFight and the Aranda Hotel, which is a program of Conard House.

The 100 block of Eddy has also gotten organized. Businesses, youth groups, and residential hotels come outside daily at 2 PM to clean their sidewalks—and displace individuals hanging out. Such a coordinated effort requires more time and dedication than it might appear; this effort has gone on for several months and there is no sign that enthusiasm for it has lessened.

The same groups involved in monthly block parties have also fought to increase police presence in the neighborhood, particularly since the fixed post on Turk and Taylor has eaten at the margin of the Tenderloin Station’s already thinly-staffed force. PianoFight, CounterPulse, and residents joined CCSROC in advocating for an agreement between SFPD and the Sheriff’s department which would allow Sheriff’s deputies to relieve police of transportation responsibilities and allow officers to return more quickly to the street after an arrest. The policy change is known as Station Transfer Units and local groups are hopeful that both departments will soon make this agreement a done deal.

The Tenderloin may have a visage of neglect and vice but these fierce efforts by residents, businesses, and community based organizations should remind the rest of that city that appearances can be deceiving.