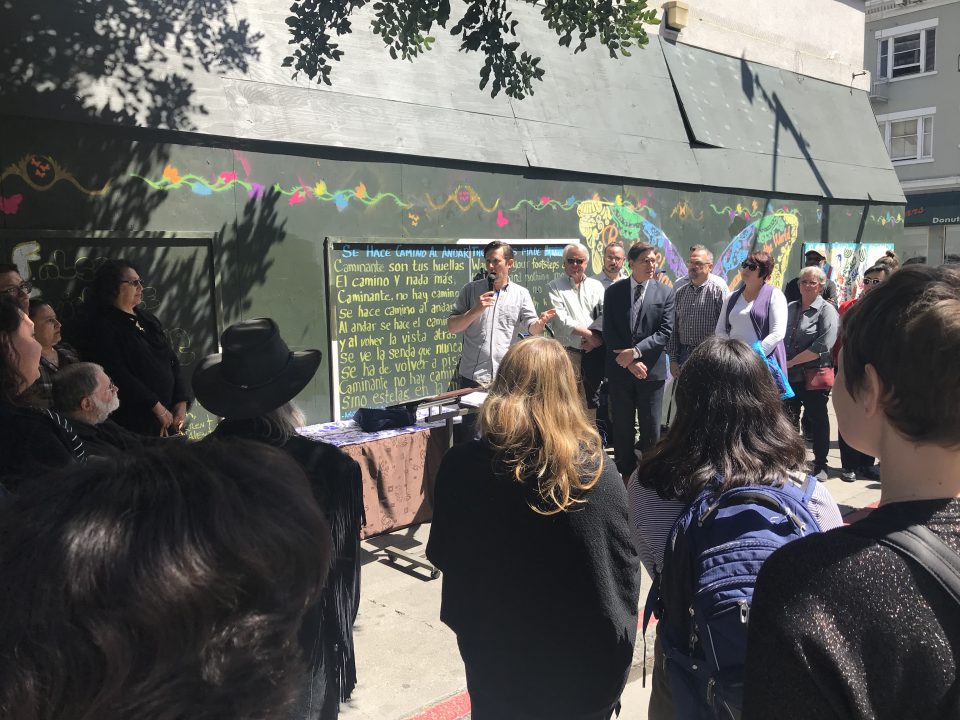 Will 101 Hyde Become A Woman-Run Market or Remain a City-Owned Drug Hangout?

Tenderloin groups rallied Monday to urge Mayor Farrell and the Board of Supervisors to provide the $1 million needed to transform an abandoned city-owned property at 101 Hyde into a one of a kind Municipal Marketplace. Those attending the rally included UNITE HERE Local 2, UC Hastings, 826 Valencia, the TL/North of Market CBD, Tenderloin Housing Clinic, La Voz Latina, the Central City SRO Collaborative, and the planned future manager of the space, the nationally acclaimed incubator kitchen group, La Cocina.

When the city purchased the property in August 2016, it planned to boost economic activity in the area and improve neighborhood food options by activating the space while awaiting affordable housing to be built on the site. It picked La Cocina to operate a public market in the space, but unexpected skyrocketing construction costs has left the project $1 million short.

Caleb Zigas, Director of La Cocina, explained, “We have an opportunity to do something transformative and iconic at 101 Hyde but need help from the city to make this happen. The Municipal Marketplace will create 7 full time Tenderloin jobs, allowing women to do the work they love and to run their own businesses. It will be the first all-women-led food hall in the country, and the first powered by women of color.”

UC Hastings Dean David Faigman pointed to construction underway across the street from 101 Hyde, the first building in the school’s new “academic village.” He saw the city’s commitment of funding for 101 Hyde as “needed to support the kids and families in the Tenderloin community.”

Kim Jackson, who has worked in the Tenderloin for UNITE HERE for 34 years, offered the mayor and supervisors a choice: “They can either give us $1 million to create the Municipal Marketplace that will transform the area or be required to walk by this space with us every day and deal with the drug dealers. The city cannot simply ignore a site it owns.”

Two of the Tenderloin’s Latino families who are members of La Voz Latina encouraged the city to fund the project. Margarita Mena told the crowd that “the city needs to end the drug sales on this corner and the marketplace is the perfect opportunity.” Johanna Ramirez felt the project will “strengthen the economic viability of Latinos in the neighborhood, and all residents will benefit.”

The Tenderloin has never gotten anywhere near its fair share of economic development assistance from City Hall. As I detail in my book on the Tenderloin, Ed Lee was the first major to prioritize funding economic assistance to the neighborhood.

And Lee’s focus made a huge difference. His tenure saw the opening of the Tenderloin Museum, Onsen Spa, the Black Cat, 826 Valencia and Piano Fight along with other Tenderloin venues.

But Lee is gone, leaving the Tenderloin without a mayor with four decades of deep affinity for the neighborhood.  Acting Mayor Farrell would likely strongly support a program like the Municipal Marketplace that is geared toward women and minority entrepreneurship, but the challenge is getting the mayor’s attention.

Backers of 101 Hyde have tried to get a meeting with the mayor but to no avail. The community will keep trying for this meeting in hopes of getting the $1 million for 101 Hyde into the mayor’s budget.

Mayor Farrell releases his budget on June 1.  If 101 Hyde is not included the community battle shifts to the Board of Supervisors for the addback process.

Keeping 101 as a city-owned haven for drug dealers cannot be an option. The community needs the Municipal Marketplace, and our elected officials need to deliver.

Randy Shaw is Editor of Beyond Chron and Director of the Tenderloin Housing Clinic. He recounts City Hall’s longtime shortchanging of the neighborhood in The Tenderloin: Sex, Crime and Resistance in the Heart of San Francisco.