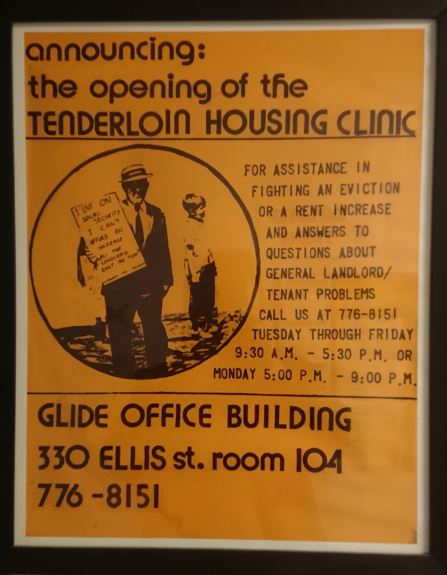 Forty years ago this week I joined with other Hastings Law Students in opening the Tenderloin Housing Clinic (THC). Our volunteers offered tenant counseling to Tenderloin residents out of a one room office in Glide. After graduating and taking the bar I became THC’s Executive Director and first fulltime employee in September 1982. I’ve been in the position ever since (THC publishes Beyond Chron).

Today, THC has over 360 fulltime employees, leases 23 SRO hotels and is San Francisco’s leading provider of permanent housing for homeless single adults. We also are the leading providers of legal defense for tenants facing Ellis Act, OMI and other no-fault evictions.

THC’s history is part of the broader story of San Francisco’s efforts to preserve and improve housing for low income and working people. During this anniversary month I will be sharing how THC advanced these goals, starting today with the area which has always been central to our mission: the struggle to preserve SRO hotels for residential and low-income use.

When THC opened in 1980 SRO hotels were seen as obstacles to the city’s economic progress. Thousands of SRO rooms were demolished in the 1960’s and 70’s via South of Market Redevelopment  with the full support of City Hall. The 1977 International Hotel evictions brought mass protests but even this dramatic displacement of seniors did not lead the city to protect SROs from conversion or demolition.

Momentum for those laws instead came from the Tenderloin. Tenants at the Dalt (34 Turk), Argyle (146 McAllister) and Glenburn (now Abigail, 246 McAllister) all faced displacement as owners tried to convert them into tourist lodgings.

Tenant and community resistance in each case was fierce.

I got involved organizing the Abigail Hotel tenants in the summer of 1980. My first press release ever was for a protest at the landlord’s medical office, with the title accusing him of “Landlord Malpractice.” Unfortunately, attorneys for the tenants called off the protest the night before believing they could “work” with the owner; I vowed right then to be a very different type of attorney and later criticized the decision to stop that protest in The Activist’s Handbook.

In the November 1980 Hastings Law News I described the battle to save the Abigail as symbolizing the larger struggle to preserve the low-income Tenderloin. This turned out to be correct.

I began representing the remaining Abigail tenants after becoming an attorney in December 1982. We fought the landlord in bankruptcy court, probate court, superior court the Court of Appeal and everywhere else. And along with the city attorney’s office we ultimately prevailed. The original Glenburn tenants were gone but we preserved the hotel’s primarily residential status.

Next month, THC is master leasing the Abigail for “step up” housing. The same demographic that lived at the Glenburn in 1980 will occupy the hotel. How fitting to celebrate our 40th year with the ultimate triumph of  the tenants and community supporters who fought so hard to preserve the Abigail’s low-income residential status.

SROs were a shambles in the 1980’s. I worked with SF Chronicle reporter Warren Hinckle to expose the lack of heat and hot water in SROs and on December 6, 1982 his story on the city’s heatless hotels blew the lid off City Hall. The heatless hotel scandal was the SF Chronicle’s front page story for a week and led to strong new heat and hot water laws.

But San Francisco code enforcement remained deplorable both for SROs and apartments. It did not materially improve until THC joined with the Residential Builders Association in placing Prop G on the November 1994 ballot.The media accused THC of being a “special interest,” as if wanting to ensure decent living conditions for tenants was not a widespread concern. Fortunately,  there was a newspaper strike two weeks before the election. Prop G  won, firing those previously in charge and creating a new Department of Building Inspection.

Since 1995 San Francisco has gone from terrible housing code enforcement to a national model. And SRO tenants are benefiting.

Thanks to Tenderloin and Chinatown activism, San Francisco passed a law protecting SROs from conversion or demolition in 1981. But it was weak, filled with loopholes. For example, a hotel at 440 Geary was allowed to convert to tourist because city officials felt the owners purchase of televisions for the rooms proved that the process of a total tourist hotel conversion had begun. Not a dime had been spent on renovations to make the hotel actually work for tourists.

I spent the 1980’s trying to plug many of these loopholes, which was hard because Mayor Feinstein opposed a stronger law. Here’s another example of how weak the law was:

In 1984, THC opened a 400 square foot office at 383 Eddy Street underneath the long vacant Hamlin Hotel. Next door to our office was the Hotel St. George, 395 Eddy. The St. George was legally 100% residential but was exclusively renting to tourists.

Seems like an obvious violation, right? Well, the law only allowed a permanent tenant to challenge an illegal conversion. So a hotel renting entirely illegally to tourists could not be sued because none of the residents had legal standing.

It bothered me greatly that the hotel next to my office was openly operating as an illegal tourist hotel. I ended up connecting to a tenant who the hotel mistakenly allowed to pay 30 days rent to get permanent residency. They tried to lock the tenant out but we stopped that so they were stuck with him.

We sued on that tenant’s behalf and got the hotel returned to residential status. In 1985 I was able to get the city to give nonprofit groups like THC the power to file administrative challenges to illegal conversions, but not lawsuits (the legislation was narrowed as the full Board was about to vote). We eventually got a full nonprofit standing provision as part of our complete overhaul of the law in 1990 under Mayor Agnos.

Now that THC could directly sue, we quickly won nearly thirty preliminary injunctions under the new law. That shows how widespread the prior law was being violated.

Preserving SRO’s for low-income residents has been San Francisco policy for so long now that some may not realize the major struggle it took to get the city to this point. But during the 1980’s and into the 90’sTHC push to preserve and improve SROs was not popular. Hotel owners had media allies that promoted hotel conversions and strong reforms were a hard sell at City Hall (even the essential legislation under supportive Mayor Agnos took over two years to pass). I had hotel owners swear at me at elevators as many believed they could be tourist hotels if only THC would look the other way.

But we wouldn’t. THC stubbornly demanded protection for SROs and their tenants. And San Francisco has preserved its SROs better than any other city as a result.

Next Week: How THC Returned SROs to Low-Income Permanent Housing

Randy Shaw is Editor of Beyond Chron and Director of THC. He is also the author of Generation Priced Out: Who Gets to Live in the New Urban America