Tech Has No Impact on SF Politics 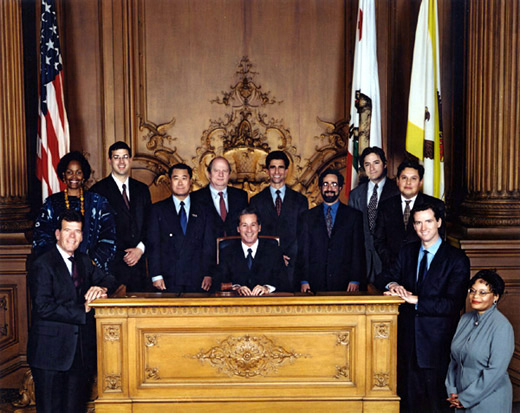 Tech has completely changed San Francisco politics, right?  Well, actually wrong. While many claim that San Francisco’s two tech booms (1997 and 2012) had such an impact election results say otherwise. In fact, the real message since  district elections returned in 2000 is one of remarkable political continuity.

And for those believing tech destroyed the “soul” of San Francisco, explain why the biggest electoral shifts in supervisor representation since 2000 have been to the left.

District 3 elected Aaron Peskin in 2000. He votes in his current tenure as before.

District 6 elected Chris Daly in 2000. Daly’s voting pattern on the Board is indistinguishable from current supervisor Matt Haney. That’s particularly telling in light of the alleged huge tech political impact in the district.

District 6 has seen the most condo development of any district since 2000. Its physical landscape is the most changed. The D6 boundaries in 2000 included solidly progressive tenant voters in the Mission, who were then replaced after the 2010 census with more affluent upscale SOMA residents. Many of the new voters live in new, non-rent controlled buildings.

If tech had the moderating political influence on San Francisco that many claim, D6 would not be represented by Matt Haney. Yet in 2018 voters overwhelmingly elected the candidate whose political views most closely resembled the supervisor elected by a presumably less progressive D6 in 2000.

District 8 elected Mark Leno in 2000 and Bevan Dufty in 2002 when Leno left for the State Assembly. Current D8 Supervisor Rafael Mandelman’s politics are very similar to those of Leno. He is more pro-tenant than the Dufty elected in 2002, but his views are consistent with the more progressive Bevan Dufty of 2019.

District 9 elected Tom Ammiano in 2000. No Board member is closer ideologically to Ammiano than current D9 Supervisor Hilary Ronen.

District 10 elected Sophie Maxwell in 2000. Current D10 Supervisor Shamman Walton has paralleled Maxwell’s voting record in his first year. D10 has also had a lot of new ownership housing built in the past two decades. If tech had moderated San Francisco politics, we should have seen evidence in Walton’s 2018 race. But as with Haney in D6, Walton won handily.

Over half the current Board has the same politics of their 2000 predecessors. And as shown below, the shifts have entirely been to the left.

Those claiming tech has shifted city politics to the right have a lot of explaining to do.

District 7 elected Republican Tony Hall in 2000. He was followed by Sean Elsbernd, now Chief of Staff to Mayor Breed. Both were considered moderates. In contrast, current D7 Supervisor Norman Yee is Board President and leader of the Board’s progressive majority.

D7 has long been closely divided.  Tony Hall only beat Mabel Teng in the December 2000 D7 runoff by 39 votes. Teng’s politics and support base were very similar to Norman Yee’s. Yee only beat moderate F.X. Crowley by 132 votes in 2012; again the district was almost evenly split between moderate and progressive candidates

D7’s political shifts say more about its rising Chinese-American voter base than anything about tech. But D7 further refutes claims that tech has moved San Francisco politics to the right.

District 4 elected Leland Yee in 2000. After Yee was elected to the Assembly in 2002 the district was represented by Fiona Ma, Carmen Chu and Katy Tang until current supervisor Gordon Mar was elected last November.

Mar is more progressive than any of his predecessors. But he would be the last person to credit tech for his victory over Tang’s chosen successor. In fact, had the moderate Tang sought re-election she would be serving D4 today.  If any broader conclusion can be drawn from Mar’s victory it is that tech did not favor the winner.

Only in Districts 11 and 5 is there arguably any difference between the politics of the current supervisor and the one elected in 2000. D11 elected deputy public defender (now judge) Gerardo Sandoval in 2000. He was part of the “progressive” wave that swept nearly all contested district races.

I can’t think of any major vote where current D11 Supervisor Ahsha Safai differed from how Sandoval would have voted but assume there may be some. The biggest difference is that Sandoval was part of the “progressive” slate in 2000 while in 2016 Safai defeated the candidate backed by most progressive groups.

If anyone has evidence that tech has made D11 more moderate, I would be interested in seeing it.

Mayoral appointments make it harder to assess D5 politics via supervisors. D5 elected Matt Gonzalez in 2000 and Ross Mirkarimi in 2004. Both were Green Party activists. After Mirkarimi was elected Sheriff in 2011, Mayor Lee appointed Christina Olague to finish his term. London Breed defeated Olague in 2012 and after she was elected Mayor she appointed Vallie Brown as her replacement. Brown faces Dean Preston in a November election for a full-four year term (Preston lost to Breed in 2016).

Based on voting in citywide races, D5 is as progressive a voting district today as in 2000. I’ll have a full story on the D5 race after Labor Day.

This piece doesn’t address mayoral elections, but its worth noting that Willie Brown was elected mayor in 1995 when nobody was talking about tech. Current Mayor Breed is not less progressive than Brown (and I think clearly more progressive than Mayor Newsom) so tech’s alleged “moderating” influence is not present in mayoral races either.

Tech’s impact on San Francisco is greatest in driving skyrocketing housing costs. Yet it is the progressive critics of tech who have been the most resistant—both in 2001 and today—to building the housing necessary to meet population and jobs growth. This new housing is essential to reduce no-fault evictions and stop rising demand from driving housing prices to the stratosphere.

As I describe in Generation Priced Out: Who Gets to Live in the New Urban America, one of the 2001 Board’s first acts was to stop new live-work loft construction. Live work lofts provided the biggest new supply of middle-class housing San Francisco had seen in decades, but the progressive Board wrongly blamed it for “gentrification.”

Today’s progressive Board majority talks about the need for affordable housing but has yet to back legislation rezoning neighborhoods so such housing can be built. And they remain adamant in defending homeowners’ rights to file frivolous appeals to hold up affordable projects.

Tech’s impact on housing costs would be a lot less if progressive supervisors supported building new multi-unit housing citywide. Yet so long as writers and politicians can blame tech for housing costs, elected officials are insulated from blame.

Randy Shaw is Editor of Beyond Chron. He discusses the causes and solutions for San Francisco’s affordability crisis in Generation Priced Out: Who Gets to Live in the New Urban America