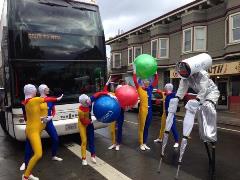 Tech-bashers in San Francisco are lining up to reap the financial benefits of the city’s growing economy—seeking money that would not be available had their political opposition to tech prevailed.

As Mayor Lee prepares his 2014-15 budget, nonprofit groups and city labor unions are pushing for their share of the city’s booming economy. But one is struck by the irony of SEIU Local 1021 protesting the “Twitter” tax break while urging wage and benefit increases for members; they and other tech-bashers are seeking money that is only available because Twitter and tech generated it.

Bigger Pieces of a Larger Pie

Public Defender Jeff Adachi and several homeless and tenant groups are seeking $13 million in new funding for housing subsidies, eviction protection, and new housing for homeless persons. This is on top of the new money for eviction defense and stabilization added through last year’s add back process, and it is on top of the mayor’s supplemental appropriation for Ellis eviction defense last fall.

The long list of budget requests includes the Police Department’s desire for a new academy building, IFPTE Local 21’s, SEIU 1021’s and other city union and nonprofit worker contracts demands, the mayor’s support for raising police staffing back to its pre-mass retirement level, and a host of other priority programs.

For those seeking money in San Francisco, this is among the best of all possible years.

How did San Francisco slash its unemployment to historic lows and achieve such a booming economy? Why are we talking about raising salaries for city and nonprofit workers and expanding programs for the poor instead of cutting back on both as we did from 2007-2010?

The chief answer, quite obviously, is the “Twitter” payroll tax strategy enacted in spring 2011. It sparked renewed confidence in the city’s economy, and brought an influx of tech companies and new investment to San Francisco. Tech’s growth turned a stagnant economy upward, and was the driving force behind the city’s economic revival.

Yet instead of praising tech for making more money available to its members and for human services, we have SEIU 1021 and some nonprofits claiming the industry represents all that is wrong with San Francisco. But their protests of tech have not deterred critics from seeking to capitalize on the money now available from the tech-generated economic boom.
.
Recall that if SEIU 1021 had gotten its way in 2011, this city’s tech influx would not have occurred. There would have been no economic boom, and increasing compensation for SEIU members would not even be on the table.

I must have missed its press release on this, but SEIU 1021 seems to have de facto adopted Mayor Lee’s position that promoting tech will increase city revenue for the benefit of the entire city, or, as he put it, “the 100%.”

What are Anti-Tech Progressives For?

Nationally and in most cities, progressives promote economic development that brings broad benefits. San Francisco may be the only major city where the term “progressive” is more identified with opposing waterfront development or blocking Google buses than with job creation for the poor and working class.

Many San Francisco “progressives” do not even feel compelled to offer any viable alternative, proactive economic development/jobs creation strategy. Yet blocking development, Google buses, or Mid-Market’s transformation into a tech hub produces no working class jobs, no increased workers’ wages, and no increases in city funding for vital public services.

Its great to promote local hire and living wage jobs, but they have little meaning absent projects/businesses that employ people. And “Green Jobs” aren’t created if nothing gets built or businesses potentially offering such jobs are not opening.

My formative political years were spent with people who used to always say that “just saying no” was not a strategy for boosting working-class jobs and incomes, or enhancing economic justice.

But San Francisco’s progressive movement has always had a wing whose main agenda is saying no. This explains why some of the same progressives that addressed social justice and equity when pushing downtown developments to pay their fair share for city service also opposed building small buildings and even home remodels in other parts of the city.

So as we soon see groups flocking to City Hall asking for funding of new programs and increased worker compensation, let’s see how many acknowledge that, absent tech, we wouldn’t even be talking about such increases at all.

Randy Shaw is Editor of Beyond Chron. He discusses the importance of pro-active strategies in his new book, The Activist’s Handbook: Winning Social Change in the 21st Century