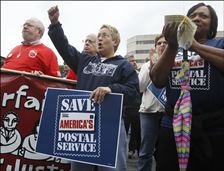 Imagine if the U.S. Postal Service announced that, in response to Tea Party budget cuts, it would not deliver to individual mailboxes for any housing unit built in San Francisco after 2009. Think it would get away with it? No way. But the Post Office made a similar decision in 2009 to deny mail service to low-income SRO tenants who did not already have individual mailboxes. Unlike new buildings, these tenants live in structures where the post office mail has always delivered mail and still must visit to drop off an unsorted pile six days a week—meaning that the cost savings of not delivering to new buildings is far greater. But the Post Office does not care. It has imposed a class-based double standard in which new apartments and condos get individual mail delivery and longstanding SROs do not. Incredibly, this blatant discrimination against the poor was upheld as “reasonable” by a federal district court in 2011 in a lawsuit brought in 2009 against the Postal Service by the San Francisco City Attorney’s office and Tenderloin Housing Clinic.

The appeal of the trial court ruling’s will be heard by the 9th Circuit Court of Appeals on Tues, November 5, at 9:00 am in Courtroom 4, at 95 -7th Street in San Francisco. If you agree that denying mail delivery on the basis of income should not be tolerated in the United States, please read further and learn how you can help reverse this outrageous result.

Whenever I tell people that the Postal Service refuses to deliver mail to individual mailboxes in many SRO hotels, the reaction is disbelief. And this disbelief increases when they learn that a federal court has allowed this blatant discrimination.

How is this possible?

While federal law prohibits discrimination based on race, ethnicity, gender and other protected classes, the government is free to discriminate against the poor so long as its policies are “rational” and “reasonable.” But even his low standard does not justify why the Postal Service can afford to deliver mail to thousands of newly built units in San Francisco—or provides costly plane service to deliver mail to rural areas– while claiming it cannot afford to serve urban SRO’s built over 100 years ago.

The Postal Service’s decision to curtail mail delivery to individual mailboxes in SRO’s emerged from the artificial budget crisis imposed on it by Tea Party Republicans. These anti-government zealots required the Postal Service—starting in 2006—to prefund retiree health care benefits to the tune of $5.5 billion annually. No other federal agency has this requirement, and it has plunged the Postal Service into debt (a “save the post office” website gives the detailed history of this funding issue)

Why blame the Tea Party when it did not exist in 2006? Because it has rejected efforts begun in 2011 to end these huge prepayments, refusing to approve a bipartisan Senate bill that would have greatly reduced the financial burden on the Post Office.

The Tea Party hates government, and no entity better symbolizes government than the Postal Service. Because the Tea Party wants to abolish the agency, it will not allow any bill through the House that relieves its financial crisis.

So when the Postal Service went before the federal court to tell its tale of financial woe, the judge had sympathy for their fiscal situation. He concluded that any budget cutting strategy that the Postal Service said was “reasonable” met that legal test—-even though denying mail delivery to existing housing while providing it to new housing units is far costlier and exposes the SRO cutbacks as an entirely irrational budget strategy.

The Post Office argues that throwing a pile of mail, magazines, and bills in front of a desk clerk for them to sort is equivalent to delivery in private mailboxes. I know that the new tenants paying over $3000 per month for one-bedrooms at the beautiful new NEMA complex at 10th and Market would find such bulk delivery unacceptable Well, so do SRO tenants.

(And while the NEMA tenants could be assured of a competent and likely bonded person sorting their mail, tenants in for-profit SRO’s often must rely on a resident desk clerks who lack minimal qualifications)

This blatant discrimination against the urban poor has operated under the radar screen, particularly because the federal court granted summary judgment in favor of the Postal Service so there was never a formal trial.

This lack of publicity about the Post Office attack on the poor needs to change, and it must start to change now.

It needs to change because court rulings are not issue in a political vacuum, as the recent Supreme Court ruling on Prop 8 again made clear. The Ninth Circuit Court of Appeals needs to know that people outside the SRO population care about

Two steps must be taken.

First, please spread the word about this outrage on all of your social media networks, in your organizational newsletters (if appropriate) and through your networks.

Second, plan on attending a rally at the court prior to the oral argument. Details are not finalized, but put 8:30am on November 5 on your calendar (yes, it’s election day in SF but we only need large numbers of people in the 8:30-9am slot).

I do not know who City Attorney Dennis Herrera has assigned to argue the appeal, but he has put the same top level talent into this case that he put into the city’s winning Prop 8. A front page story in the March 19, 2013 New York Times highlighted the outstanding work of Herrera’s office, and having it on the side of SRO tenants in the mailbox case gives us the best chance to win.

While the issue is SRO hotels, this struggle should engage everyone who cares about justice and fairness in the United States. Denying fundamental rights to the poor that all other take for granted takes the nation down the wrong path, and the Ninth Circuit Court of Appeals must correct it.

Randy Shaw is Editor of BeyondChron. He is also Director of the Tenderloin Housing Clinic, which is an attorney in the case. He discusses when to use the courts for social change in his new book, The Activist’s Handbook, Second Edition: Winning Social Change in the 21st Century