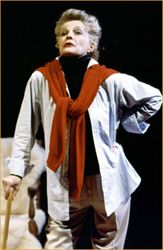 “When I can’t sleep, I put “Gone With The Wind” in the Betamax.” That is a line from the new play “Tea at Five” – that gives us a fun and lively look at the cantankerous star Kathryn Hepburn. Many years ago in her career Kate Hepburn wanted desperately to play the role of Scarlet in the blockbuster movie “Gone with the Wind.” So did every other big star in Hollywood, most notably Bette Davis. None of the big Hollywood names got the job – it went of course to Vivian Leigh who was mostly unknown in this country. Hepurn even had to audition for the part, which she complained about bitterly. After all, she was a big star. And if you are wondering what a Betamax is, it was an early version of video taping that actually was far superior to the VHS format that was shoved down our throats. As they say – follow the money.

This fascinating story of Kate Hepburn is vividly brought to life for us in an extraordinary re-creation of Hepburn. When you see the picture on the cover of the Playbill – you would swear that is really is the screen star. Kate Mulgrew is the star on the cover and the star on the stage. And, as difficult as it is to keep an audience tuned in when there is only one person on the stage for two hours, Mulgrew manages to amuse us and give us insight into Hepburn and the way that she lived out her life in Connecticut in the last days of her stardom.

Another amusing moment comes when Hepburn is talking about Broadway. “There is this show they wanted me to be in by someone called Sondheim. The big song was ‘You could drive a person crazy’ and it almost did.”

I won’t try to give you all the amusing little things that happen along this personal journey into one of the most important stars of the time – I’ll leave that to Kate Mulgrew, who doe’s it better than anyone. There is no vulgar exaggeration that you hear from some drag queens, but she does capture her essence. (Lest there is confusion, Mulgrew is not a drag queen). Although a few times she did seem to also be channeling Carol Channing.

In act two, Hepburn is ill and is turning down most calls and offers to work. She shakes and has to take pills to control it. However she did get a call from Warren Beatty to appear in a film. At first she turns him down. He calls again, she again turns him down. Then, as she thought about it – she picks up the phone, trys to look up his number in her phone book and says “Damn.” – because she couldn’t read it. She squints, turns the paper for better light and finds it. “Hello Warren? Yes.” – and hangs up. This was a wonderful moment executed excellently by Mulgrew.

Critics didn’t always love Hepburn. One said of her when she appeared on Broadway in a play. “Hepburn played the entire gamut of emotions last night – from A to B.” Another said of her about the screen test for “Gone with the Wind” — “She tested like a Boa Constrictor on a fast.” In fact some at the studio gave her the nickname “Box Office Poison” – referring to a long period of flop movies. Heyburn’s last award winning movie was “On Golden Pond” with Henry Fonda in 1982. She won the Academy Award for Best Actress. On fashion Hepburn once said: “I wear my sort of clothes to save me the trouble of deciding which clothes to wear.” Her choice of clothes were always pants. And that is exactly what Kate Mulgrew wears in the play. But, these aren’t just pants – they are eloquent. She also said “Life is hard. It kills you.” And so it did.

You won’t find a better acted play around. If you are a Hepburn fan you will be ecstatic. Even if you are too young to know some of the things that are brought in the play – you still will enjoy the humor and the electric performance by Kate Mulgrew.

Randall Keith in Les Miz at the Curran Theater. Photo by Joan Marcus


One of the most melodic Broadway musicals of all time is now at the Curran Theater and I was lucky enough to chat with its star Randal Keith (Val Jean). I asked him. What do you think is the reason that so many people are touched by this show? “It’s the story. The story is so real. People connect with it.. They see themselves. Everyone has things in their life that they would like to rectify – redeem past mistakes. That is what this story is. It’s about being fair and making amends. It is such an emotional show – it is not just entertainment, it creates a bond with the audience.”

Do you see parables with the way things were then and the way things in the world are now? “Any good story can be transplanted in any time frame. The past always catches up with you. There are the same issues. Student uprising.Terrorism.and wars. The musical was an emotional outlet for many theatergoers right after 911. At first audiences stayed away – then they found this emotional outlet in the music that helped them to make a transition.”

You have played a huge array of parts in shows like “Phantom”, “Sunset Boulevard” and “Evita” among others. What part has given you the most pleasure? “Les Miz”. I’m not saying that just because I am in it now. It is so rewarding to me to take the audience through this emotional epic journey. “

Has this version of Les Miz changed from past versions and has it been performed in other cities before coming to San Francisco? “Well, you know, I played the same part in New York for the last three months before the show went of tour. The show you see here is the same show that was in New York. The musical director from New York never lets the show just sit or get stale. Before each opening in each City he reviews it to make sure that it meets the company standards of excellence. And yes, this same show has been on tour in other Cities before arriving on the Curran stage.”

I understand that Cameron Macintosh insists on using the Curran for Les Miz. Have you ever played the Curran before? “Not in this show – and I am very excited about it. It’s a wonderful theater.”

Can you tell me an amusing story that happened during a performance or a rehearsal? “Ha, Yes.It was in Les Miz in New York one evening when my wig fell off. It fell on my arm and just stayed there during the song. There was nothing I could do but finish the song with the wig draped over the shoulder. The audience didn’t seem to notice.”

When you performed in this role in Asia in Beijing and Seoul. How did they do that? Did you have to learn the language – or was it like the Opera with Sub-Titles flashed about the stage? “The performance was in English – with a board over the stage with the translation. It was strange performing the show in China near Tinneman Square where they had the student uprising, since this play has similar student uprising scenes. But it was the Chinese Government that requested we bring the show to them. In Asia the response to the show was tremendous. We got more curtain calls there than anywhere else we performed. We even had to add two more curtain calls at the end of every performance. It was an amazing experience.”

“Keep in mind that Cameron Macintosh demands excellence. There are the same sets, the same costumes and the same high quality in this show”, he told me.

After talking to Keith – this came in. This will be the last time that Les Miz will play San Francisco. Macintosh had this to say: “There won’t be one more day”. Quoting words form the song in the show “One more day.” Maybe it will take to the Opera stage. After all – it really is an Opera.
(Review next week)

Like a film Noir movie – the satirical look at the Classic movie “Hush, Hush Sweet Charlotte”.has the classic elements of “Noir”. There is madness, or someone trying to make someone think that they are mad, deception, greed, trickery and murder. It’s just your everyday “Family Values” in Hush Up, Sweet Charlotte starring Matthew Martin as Bette Davis and Varla Jean Merman as Olivia De Haviland. Both drag Queen/actresses have tons of experience with this kind of tongue-in-check show. The audience on opening night couldn’t have been better. In fact, who knows they could have been trucked in from Central Casting? They had a marvelous time.

These two comic actors Martin and Merman are experts at comic timing. In fact, they are so good – that if Hollywood ever made a remake of the original Hush Hush which has became a cult movie of sorts – this drag version would become an instant underground hit. All the blue-gloved ones would come out in droves to see it.

The story is about an eccentric cousin, whose father has left her a fortune. She calls on her cousin played by Merman to help her out. The County where her house sits wants to widen the road – and they want to demolish the home. Poor Charlotte (Martin). She has plenty of problems – but nothing like she will see when her conniving Cousin arrives with her little torture bag of tricks.

In the show is really a lovely song “Hush, Hush Sweet Charlotte” – that actually made the Billboard charts when the film was first released. The Character actors in the play are just fab. They are Sandra Schlechter, Michael Sousa, Andre C. Andree, Woody Clark, Erika Atkinson, Vince Calvarese and Kai Brothers.
This play is irresistibly entertaining. It’s your Summer Escape. It’s a hoot that will definitely get you off your knees!

AND WHAT’S YOUR STORY? SEND A FUNNY STAGE STORY TO: buzztatler@aol.com