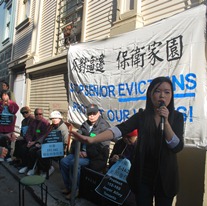 Tammy Hung is little known to the general public, but she has likely shaped San Francisco politics in recent years as much as any non-politician. Hung is a community organizer. Her primary organizing role is with the Community Tenants Association (CTA), San Francisco largest and most active tenant membership organization. CTA offers a remarkable model for progressive social change groups, but its successes often go unreported in the English language press because nearly all of its members are monolingual Chinese-speaking. CTA recently worked for the passage of Prop C (the affordable housing trust fund), and helped D1 Supervisor Eric Mar secure Chinese-American votes in his re-election campaign. CTA routinely turns out the most supporters to City Hall in support of critical tenant protection measures. CTA and Hung work day in and day out to improve the lives of low-income San Franciscans, and it’s time their story is told.

For over two decades, whenever San Francisco tenants have battled Ellis Act or owner move-in evictions, or other problems causing the displacement of longterm tenants from their homes, the Community Tenants Association has been there. CTA is counted upon to bring large numbers of members to City Hall rallies and Board of Supervisor hearings, and their presence makes a difference time and time again.

CTA emerged in response to the four year citywide struggle to stop the eviction of tenants living above the Orange Land market on Chinatown’s Stockton Street. Over 100 tenants faced eviction, and many saw the very future of Chinatown as a low-income residential community at stake if the building was torn down and replaced by a commercial high-rise or condominiums.

The Orange Land tenants finally won their struggle in January 1987. The campaign had two longterm implications.

First, it prompted Chinatown tenants to create CTA as an ongoing membership organization to fight for tenants interests.

In 1988, Bao Yan Chan emerged as the dynamic leader of CTA. Mrs. Chan led the fight to save her own building, the Notre Dame Apartments, from conversion to market rate housing. Her success at keeping the building affordable showed her ability to harness broad political forces on tenants’ behalf, a strategy that CTA continued after she died in 2006 at age 88.

Mrs. Chan was a brilliant community organizer. She had the idea of offering CTA members free citizenship classes, which encouraged people to become formal members (annual dues are $20) I have a hard time recalling a single Board of Supervisors hearing from 1988 through her death where Mrs. Chan was not a speaker; among other struggles she led CTA into playing a major role in the struggle by Trinity Plaza tenants, demonstrating that the group’s commitment was for all renters, not just Chinese-American tenants.

Mrs. Chan personally went to Washington DC to request federal support for the Central Subway. Because Chinatown is the hub for the city’s Chinese immigrant population, getting people in and out of the neighborhood was a top CTA priority.

CTA’s membership is citywide, with roughly half of the members living in Chinatown. Only a small number of its members live in buildings owned by the Chinatown Community Development Center (CCDC), contradicting repeated false media claims that Chinatown activists are being compelled to get involved by their nonprofit landlord. Nearly all CTA members are immigrants and their median age is around 65. Because CTA members are overwhelmingly retired, they have time during the day to attend meetings and activist events.

CTA has a 23 person Board and its weekly meetings typically attract 100 members. it’s monthly Town Hall meeting usually brings around 300.

Among the similarities between CTA and the activist immigrant groups that boosted the labor movement in the 1930’s is that group meetings all begin with singing (karoke in CTA’s case). I recently attended a CTA dinner and was struck by how most members joined in the singing, and how it contributed to the event’s festive atmosphere; the farmworkers movement also used song to create connections between members, as did the labor movement in its heyday.

Like the San Francisco Tenants Union, CTA is a 501(c)(4) organization that can legally endorse candidates and work on their campaigns. Voter registration is a top CTA priority, as is supporting candidates whose agenda they support. In recent years this has included David Chiu’s D3 race in 2008, Jane Kim’s D6 contest in 2010, and Mayor Lee’s campaign in 2011.

The notion that powerful leaders like the late Mrs. Chan and current CTA President Wing Hoo Leung are taking orders from Pak or anyone else is false, racist and demeaning. When Wing Hoo Leung fought (and defeated) his own Ellis eviction on Jasper Place in May 2010, CTA turned out so many people to a rally that the street was blocked off. I have never seen so many people (including several elected officials) turn out for an Ellis eviction protest.

CTA embraced Ed Lee’s mayoral run not because they got instructions from Rose Pak, but because of their long history with Lee going back to Orange Land. Those involved in that struggle have never forgotten Lee’s fight on their behalf, nor have their families and those supporting the Orange Land tenants.

So CTA went all out to elect Ed Lee as Mayor, and members took great pride in seeing San Francisco’s first Chinese-American mayor elected to office. It was clear from Lee’s appearance at the CTA dinner that he and the members have a very special bond, which even allows them to laugh at his actually quite improving efforts to speak Cantonese.

Tammy Hung aka “The Machine”

Like many great organizers, Tammy Hung prefers to stay behind the scenes. Known to fellow activists as “the machine” for her focus, efficiency and leadership, Hung helps keep a 1000 member group together without email, tweets, texts and the other communication tools many young activists find indispensable. CTA does not have a website, or even an office, relying on word of mouth among members to move the organization forward.

Hung, 28, arrived in Oakland from Hong Kong when she was ten. She attended UC Berkeley but was not involved in activism until she graduated and began working for the Asian Law Caucus. She joined CCDC in 2008 where she now serves a senior community organizer.

Hung recognizes that CTA’s strength must come from its members, not from her. She sees her role as helping build connections among CTA members, and assisting CTA leaders in implementing the organization’s agenda

While the demographics are very different, CTA has key similarities with the Latino-dominated farmworker movement of the 1960’s through the late 1970’s, and the multiracial membership of ACORN, which dissolved in 2010. Organizers in all three groups prioritized strong member leadership and skill-building, and saw their role as providing technical, logistical, and political guidance to what they aspired to be a member-driven organization.

CTA also reminds me of San Francisco’s Senior Action Network in its original form under Marie Jobling and Jodie Reid. Tammy Hung is in their mold. But these two great organizers had each other, while Hung, at a very young age, is CTA’s only staff.

Hung and CTA plan to keep on working to help people in 2013, and San Francisco is a better place for their efforts.