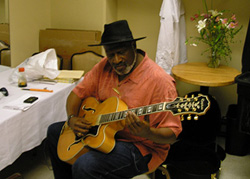 This Sunday night, I’ll be enjoying my birthday dinner at the new Yoshi’s on Fillmore, seeing one of the greatest musicians of al time, the incredible Taj Mahal and his Phantom Blues Band. Taj has been playing his own distinctive brand of music — variously described as Afro-Caribbean blues, folk-world-blues, hula blues, folk-funk, and a host of other hyphenations — for more than 40 years. Caribbean, Hawaiian, African, Latin, and Cuban sounds and rhythms mix with folk, jazz, zydeco, gospel, rock, pop, soul, and R&B, all layered on top of a solid country blues foundation.

What ties it all together is Taj’s abiding interest in musical discovery, particularly in tracing many American musical forms back to their roots in Africa and Europe. Following his passion, Taj has spent time in the Caribbean, West Africa, Hawaii, Europe, the South Pacific, Australia, South America, and all over the continental U.S. His music reflects his global perspective, incorporating sounds from everywhere he’s lived and traveled.

A self-taught musician, Taj plays more than 20 instruments, including the National Steel and Dobro guitars. His remarkable voice ranges from gruff and gravelly to smooth and sultry. Now with his own independent label, Kandu Records, Taj plans to help other musicians the way other independents have helped him. “I’ll be working with some young contemporary people to get their work out there. I might like to produce some people in the not-so-distant future.”

Taj credits much of his success to the freedom that independent record companies have given him later in his career. Too often, he says, big record companies try to put artists in a box musically. “There is a lot of music that people do not get to hear, and it’s unfortunate. It’s because of marketing and the fact that somebody [at the record company] says you won’t like this. But the people who come hear me get to hear everything I know about.”

Born Henry St. Claire Fredericks in Harlem on May 17, 1942, Taj grew up in Springfield, Massachusetts. His father, a jazz pianist/composer/arranger of Caribbean descent, and his mother, a gospel-singing schoolteacher from South Carolina, encouraged their children to respect and be proud of their roots. His father had an extensive record collection and a short-wave radio that brought sounds from near and far to Taj’s ears. His parents also started him on classical piano lessons, but after two weeks, he says, “it was already clear I had my own concept of how I wanted to play.” The lessons stopped, but Taj didn’t.

In addition to piano, the young musician learned to play the clarinet, trombone and harmonica, and he loved to sing. He discovered his step-father’s guitar and became serious about it in his early teens when Lynnwood Perry, an accomplished young guitarist from North Carolina, moved in next door. Perry was an expert in the Piedmont style of playing, but he could also play like Muddy Waters, Lightin’ Hopkins, John Lee Hooker and Jimmy Reed. Taj was inspired to begin playing guitar in earnest.

Springfield in the ’50s was full of recent arrivals, both from abroad and from elsewhere in the U.S. “We spoke several dialects in my house — Southern, Caribbean, African — and we heard dialects from eastern and western Europe,” says Taj. In addition, musicians from the Caribbean, Africa, and all over the U.S. frequently visited the Fredericks household. Taj became even more fascinated with roots — where all the different forms of music he was hearing came from, what path they took to get to their current states, how they influenced each other on the way. He threw himself into the study of older forms of African-American music, music the record companies largely ignored.

While attending the University of Massachusetts at Amherst as an agriculture student in the early 1960s, the musician transformed himself into Taj Mahal, an idea that came to him in a dream. He began playing with the popular U. Mass. party band The Elektras, then left Massachusetts in 1964 for the blues-heavy L.A. club scene. There he formed The Rising Sons with Ry Cooder, Ed Cassidy, Jesse Lee Kinkaid, Gary Marker, and Kevin Kelly. At the Whiskey A Go Go in Los Angeles, The Rising Sons opened for Otis Redding, Sam the Sham, The Temptations, and Martha and the Vandellas at The Trip. Taj also had the opportunity to hear, meet, and play with such blues legends as Howlin’ Wolf, Muddy Waters, Junior Wells, Buddy Guy, Louis and Dave Meyers, Sleepy John Estes, Yank Rachel, Lightin’ Hopkins, Bessie Jones, the Georgia Sea Island Singers, and Hammy Nixon.

Taj tapped these experiences on three hugely influential records: Taj Mahal (1967), The Natch’l Blues (1968), and Giant Step/De Old Folks at Home (1969). Drawing on all the musical forms he’d absorbed as a child, these early albums showed signs of the musical exploration that would be Taj’s hallmark over the years to come.

“I didn’t want to fall into the trap of complacency”, says Taj. “I wanted to keep pushing the musical ideas I had about jazz, music from Africa and the Caribbean. I wanted to explore the connections between different kinds of music.”

In 1970, Taj traveled to Spain to have a well-deserved rest and vacation in the home of the Guitar. He carved out his own musical niche with a string of adventurous recordings throughout the ’70s, including Happy to Be Just Like I Am (1971), Recycling the Blues and Other Related Stuff (1972), the Grammy-nominated soundtrack to the movie Sounder (1973), Mo’ Roots (1974), Music Fuh Ya’ (Music Para Tu) (1977), and Evolution (The Most Recent) (1978).

Taj’s recorded output slowed considerably during the 1980s as he toured relentlessly and immersed himself in the music and culture of his new home in Hawaii. Still, that decade saw the well-received Taj (1987) as well as the first three of his celebrated children’s albums. He returned to a full recording and touring schedule in the 1990s, including such projects as the musical scores for the Lanston Hughes/Zora Neale Hurston play Mule Bone (1991) and the movie Zebrahead (1992). Later in the decade, Dancing the Blues (1993), Phantom Blues (1996), An Evening of Acoustic Music (1996) and the Grammy Award-winning Señor Blues (1997) were both commercial and critical successes.

At the same time, Taj continued to explore world music, beginning with the aptly named World Music in 1993. He joined Indian classical musicians on Mumtaz Mahal in 1995, recorded Sacred Island, a blend of Hawaiian music and blues, with The Hula Blues in 1998, and paired with Malian kora player Toumani Diabate for Kulanjan in 1999.

Since 2000, Taj has released a second Grammy-winning album, Shoutin’ in Key (2000) and recorded a second album with The Hula Blues (2003’s lush Hanapepe Dream). “I walk with the energy of music every day. I don’t have to turn it on to hear it play.”

While Taj’s music has always been well received, popular culture finally caught up to him the ’90s and 2000s. Taj walked away with the Grammy for Best Contemporary Blues Album for 1997’s Señor Blues and again for 2000’s Shoutin’ in Key, both recorded with The Phantom Blues Band. He has garnered nine Grammy nominations in all.

After more than a decade of playing with larger ensembles, Taj wanted to do more guitar playing with a smaller group. In addition to The Phantom Blues band, Taj tours with The Taj Mahal Trio – just Taj on guitar, piano, and banjo, Bill Rich on bass and Kester Smith on drums. These musicians have been playing together on and off for more than 30 years. Together, they draw on a long, shared history of Taj’s music.

The Trio allows the music between voice and guitar to happen with the smallest amount of accompaniment – bass and drums,” says Taj. “That leaves a lot of space to be filled. The guitar is not submerged but right up front in the music. It’s a challenging place to play.

More collaborations are on the way as well. He mentions a second edition of the Rolling Stones’ Rock and Roll Circus, more work with African musicians, and a desire to do more tuba band music “sooner rather than later.” There will also be projects even he doesn’t know about yet. “I work with this person and that person. Most of this stuff has not been stuff that I planned, it just worked out that way.

Whoever Taj works with and whatever sounds he puts his hand to in the coming years, you can bet that the blues will play a big part. “You got that tone together,” he says, “everything else is flavor.”