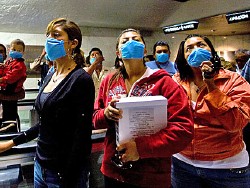 Everyone is terrified about the current outbreak of swine flu. Daily photos of Mexican citizens with medical face masks highlight the enormous danger of a pandemic. The terms “swine flu” and “swine fever” are often used interchangeably, and it appears that medically they are one and the same. What’s scary about this outbreak is the crossover of a virus from animal to human – something supposed to be “rare.” According to Monday’s SF Chronicle, swine flu is “a form of influenza type A that typically is very infectious – but not deadly – in pigs and is rarely passed on to humans … The new strain is an unusual combination of viruses that typically infect birds, pigs and humans separately. It’s a form of influenza, known as H1N1, that humans have been exposed to before, but never this particular strain.”

Yet few are aware that the United States government, acting through the CIA and anti-communist exile operatives, once was involved in deliberately introducing exactly such a disease into Cuba for the purposes of destabilizing the Cuban economy and encouraging domestic opposition to Fidel Castro.

The story first appeared January 10, 1977 on the front page of the San Francisco Chronicle. Sourced from Newsday, the headline was “1971 Mystery – CIA Link to Cuban Pig Virus Reported.” Note the assertion that such diseases cannot cross over to humans:

Six weeks later, an outbreak of the disease forced the slaughter of 500,000 pigs to prevent a nationwide animal epidemic.

The 1971 outbreak, the first and only time the disease has hit the Western Hemisphere, was labeled the ‘most alarming event’ of 1971 by the United Nations Food and Agricultural Organization. African swine fever is a highly contagious and usually lethal viral disease that infects only pigs and, unlike swine flu, cannot be transmitted to humans.”

Bay Area journalist and all-around muckraker Warren Hinckle later included this story in his 1981 title The Fish is Red – The Story of the Secret War Against Castro. In it he described this event, one of many by the CIA to undermine Cuba. His account places the incident a year earlier, but the basic event elements remained the same:

“In March 1970 a U.S. intelligence officer passed along a vial of African swine fever virus to a terrorist group. The vial was taken by fishing trawler to Navassa Island, which had been used in the past by the CIA as an advance base, and was smuggled into Cuba, Six weeks later Cuba suffered the first outbreak of the swine fever in the Western Hemisphere; pig herds were decimated, causing a serious shortage of pork, the nation’s dietary staple. The United Nations Food and Agricultural Organization called it the ‘most alarming event’ of the year and futilely tried to track down “how the disease had been transmitted.”

So, while it’s appropriate to be concerned about the risks of this outbreak, the United States government should refrain from criticizing the public health practices at our neighbor to the South.