Sweet Honey In The Rock Comes To Zellerbach Hall 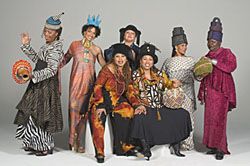 Long before the rise of Marie Daulne’s Zap Mama in the 1980’s, Bernice Johnson Reagon’s, “Sweet Honey In The Rock”, had been breaking new ground in the 1970’s. From their beginnings with actor Kevin Hook’s D.C. Black Repertory Theater Company, Sweet Honey soon became an internationally renowned a cappella ensemble, and continues to be a vital and innovative presence in the music culture of D.C., and in communities of conscience around the world.

Sweet Honey has been called a “path, a way, a discipline, and a process”, by its founder and until recently, its mainstay Bernice Johnson Reagon, who wrote in the book, “We Who Believe in Freedom – Sweet Honey In The Rock Still On The Journey” (1993), a chronicle of this extraordinary African-American female vocal group. Indeed, Sweet Honey has been a glorious, evolving process of growth and change throughout its existence.

Entering their fourth decade, the Grammy Award-winning ensemble moves forward following Bernice Johnson Reagon’s retirement in February 2004, continuing the legacy begun thirty-one years ago. Reagon’s departure has had the expected effect on Sweet Honey’s fans, mixed emotions of both sadness, and excitement over the addition of two new singers.

Sweet Honey derived their name from Psalm 81:16, with the “promise to a people of being fed by honey out of the rock. Honey – an ancient substance, sweet and nurturing. Rock – an elemental strength, enduring the winds of time”. The metaphor captures completely these African American women, whose repertoire is steeped in the sacred music of the Black church, the clarion calls of the civil rights movement, and songs of the struggle for justice everywhere.

In the best and in the hardest of times, Sweet Honey has come in song to communities across the U.S., and around the world by raising their voices in hope, love, justice, peace, and resistance. They invite their audiences to open their minds and hearts and to think about who we are, what we do to one another, and to our fellow creatures on this planet.

Like Sun Ra’s “Arkestra”, and other longtime ensembles that have continued in their founder’s stead, Sweet Honey In The Rock continues to spread their message in song, spirit, and vision of Bernice Johnson Reagon.

Sweet Honey in the Rock will be appearing Friday night at Berkeley’s Zellerbach Hall.