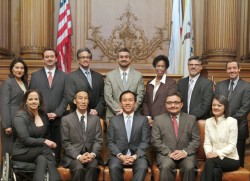 Under the cloud of Sacramento’s awful budget deal, the San Francisco Board of Supervisors passed the City budget yesterday – knowing state cuts (including a raid on local government funds) will put us right back in the hole. The City Charter gives Gavin Newsom the power to make unilateral mid-year cuts, so the Board debated how to prevent a Mayor – who has dissed the legislative branch for years – from gutting $43.7 million in services they had just restored. Budget Committee Chair John Avalos – who with Board President David Chiu had negotiated a budget with the Mayor’s Office – offered an ordinance to have Newsom return when mid-year cuts happen, giving the Board a chance to weigh in. But Avalos and Chiu also voted against a Charter Amendment curbing the Mayor’s discretion to not spend appropriated funds, prompting Chris Daly to storm out of the Board Chambers. Ross Mirkarimi’s motion to put Newsom’s “pet projects” on reserve also failed to pass, but David Campos’ motion – putting $45 million from the City’s seven largest departments on reserve to give the Board leverage – prevailed. The Supervisors also voted to give $650,000 back to the Public Defender, cut $483,000 from the Police and restore about $1 million to the public campaign fund.

In a historic budget season where the Supervisors demanded equity from the Mayor, an unprecedented $43.7 million in public health, human services and other programs slated for the chopping block were saved. But so were Newsom’s pet projects – like his City-funded campaign for Governor, most of the bloated Fire Department, the Community Justice Center and the 311 Call Center will remain open 24 hours a day. Everyone knows that future cuts are inevitable, considering that $7 million used to pay for the “add-backs” came from money set-aside to absorb state budget cuts. The challenge before passing the budget was how to protect the gains they had made, before it falls into the hands of the Newsom Administration.

Less than 24 hours before yesterday’s meeting, we got news from Sacramento – and it was not pretty. Stuck by the two-thirds requirement to pass a state budget, Democratic leaders capitulated to a lame-duck Governor, and Republican extremists in the legislature. There are no revenue solutions in the state budget proposal, besides offshore oil drilling. Instead, we have $15 billion dollars in painful cuts that will be felt locally – and $11 billion in borrowing gimmicks, including a $4.5 billion raid on local government. We were told at one point that the state would not “borrow” local property tax revenue, but would instead go after our gas tax money. Actually, they did both.

Trying to Hold the Mayor Accountable

Back home, Supervisor John Avalos presented the City budget – and warned about future cuts. “We are in the eye of the storm,” he said. “We have a budget that keeps the City running, and preserves our safety net. We’re not quite done yet, but we’ll do the best we can.” After the Board passes a budget, the Mayor gets to spend the money for a year – but can make mid-year cuts if revenue comes short. Supervisors are keenly aware about what happened in December, when Gavin Newsom showed up in the Board Chambers to announce the City was in crisis, but wouldn’t provide details on cuts – or allow the legislative branch to formally have a say. Forty-one percent of the “add-back” money the Supervisors restored in last year’s budget was never spent, because the Mayor targeted them in mid-year cuts.

In a motion that passed unanimously, Avalos made changes to the Annual Appropriation Ordinance (i.e., budget) designed to prevent that from happening again. The Controller will issue a report one week after the state budget passes, explaining the shortfall. Within 21 days of that report, Newsom will propose changes to the City budget – which cannot go into effect for 45 days so the Supervisors could review it. The Board would then vote to approve – or amend – the proposal. If the City continues to face fiscal problems later in the year, the process will repeat itself. Avalos called this a “mini-budget” process.

With the budget’s final passage, this procedure will become law – but it raises questions about why the Charter gives the Mayor so much power. “Checks and balances” requires two co-equal branches of government, with the executive having veto power that a super-majority can override. Even the President of the United States doesn’t have power to just not spend money Congress has appropriated – as Richard Nixon and Ronald Reagan were both sued when they tried that. Chris Daly proposed a Charter Amendment later on in the meeting – to be placed on the November 2009 ballot – that would allow a super-majority of the Board to designate certain budget appropriations as mandatory spending.

Charter Amendments need six votes to be put on the ballot, and the electorate then has to pass it by majority vote. Newsom had called Daly’s proposal one of the worst ideas he’s heard of in 15 years, and vowed to make its defeat his top priority if it goes to the ballot. Only four Supervisors voted for it (Daly, Ross Mirkarimi, Eric Mar and David Campos), so the measure failed. Daly then stormed out of the Board Chambers, returning shortly afterwards with a typed letter announcing his resignation from all committee assignments. This means that now two Supervisors have asked not to serve on any committees, the latter being Michela Alioto-Pier – who is running for statewide office.

But other progressive Supervisors had other amendments to the budget as a means of holding Newsom accountable. Ross Mirkarimi introduced a motion to put some of the Mayor’s “pet projects” – such as his five press secretaries and the Community Justice Center – on reserve. It would not be a de-appropriation per se, but would at least give the Board leverage if Newsom tries to make mid-year cuts on the programs they had fought to restore. Mirkarimi conceded it was a “clumsy,” but argued it was necessary to have the Mayor listen. “I cannot vote on this budget if we don’t have reserves,” he said.

Avalos and Chiu, however, said they would not support Mirkarimi’s motion – as it could tear apart the budget negotiations they had crafted with the Mayor. “These are all items that were brought up in negotiations,” said Chiu, “and there’s a reason we were able to get $43 million in add-backs.” With the six progressives divided on the motion, it failed by a 4-7 vote.

The Board passed Campos’ amendment by a 7-4 vote. It’s important to understand none of these figures are “budget cuts” – and some might never become cuts. But if Newsom plans mid-year cuts to crucial services, there is now the chance of getting – for example – the Police Department to “share the pain,” because $12 million of their budget is on reserves. Or the General Services Agency – which runs the 311 Call Center – could be cut to close down the City’s non-emergency phone line from 11:00 p.m. to 7:00 a.m., which would save half a million dollars. This motion lets the Board survive another day to protect the City budget.

Other Amendments to the Budget

As I’ve written before, Public Defender Jeff Adachi has done an admirable job standing up for his agency’s budget this year – setting a new standard for department heads. He packed the Board Chambers with supporters, and gave a rousing presentation about restoring the Mayor’s cuts. “We cannot fulfill our constitutional mandate,” he said, “with a $1.6 million cut, and it will be more expensive to the City. No one does volume as we do.”

Another concern for the Supervisors was the City’s Campaign Finance Fund – money set aside each year for candidates for Mayor or the Board of Supervisors who agree to take matching funds in exchange for spending limits. Last year, Budget Committee Chair Jake McGoldrick cut a deal with Newsom that the City would “borrow” $5 million from the fund because we were in a budget crisis. McGoldrick insisted then the Mayor had assured him the money would be returned. “I will run for Mayor myself if the money is not there,” said McGoldrick. “Please trust me on this one, and I don’t sell suits at Men’s Wearhouse.”

To no one’s surprise, Newsom did not return the money this year. But John Avalos’ proposal – which passed unanimously – put $800,000 back in the public campaign fund by removing an “add-back” where alternative funding had been secured. The Board also voted yesterday to take $483,000 out of the Police Department – one Deputy Chief and two Commanders – to replenish the fund. They also initially voted to take $1 million out of the Convention Facilities budget. The latter, however, was later put “on reserve” for future use – either for the Convention and Facilities, or the Public Campaign Fund.

The Board voted 6-5 to take a combined $500,000 from the City’s subsidies to the Opera, Ballet and the American Conservatory Theater (ACT) – redirecting it to the Childcare Restoration Services fund. Aaron Peskin proposed a similar idea in December, when the Mayor proposed mid-year cuts to health and human services. While these programs are worthy, it is easier for them to get private funding.