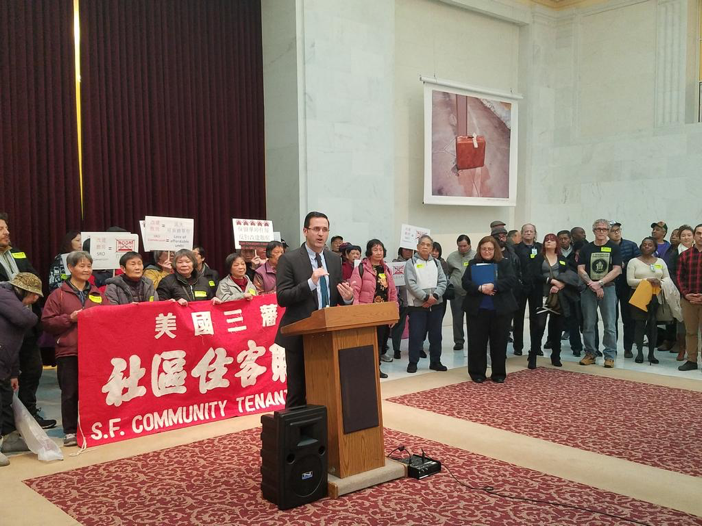 Supervisor Ahsha Safai at media event prior to SRO hearing

On January 23, the San Francisco Board of Supervisors Land Use Committee (Supervisors Cohen, Sheehy and Peskin) approved housing legislation likely to have the biggest impact in 2017: a reform to the city’s Residential Hotel Unit Conversion and Demolition Ordinance (hereafter “the HCO”) that returns hundreds and perhaps thousands of single room occupancy hotel units to the residential market.

No measure will more quickly or dramatically expand the city’s affordable housing stock this year. Supervisors Safai and Kim also asked to be added as co-sponsors, and the legislation is now headed for certain passage.

Introduced by Supervisor Aaron Peskin last December, the legislation stops the longstanding—and illegal— practice of SRO’s renting residential rooms to tourists on a weekly basis.  It has always been illegal to rent residential SRO rooms to tourists by the week, but because the HCO allowed residential rooms to be rented for only a week, enforcement was difficult. SRO owners claimed that they could not be punished for renting weekly to someone from New York City or London because the guest told them they were “intending to move to San Francisco.”

*The Tropicana Hotel at 663 Valencia is legally designated as 40 residential rooms and 0 tourists. Yet it operates as a tourist hotel, taking desperately needed SRO rooms from the Mission neighborhood.

*The Hotel des Artes, 447 Bush, has 38 residential and only 13 tourist rooms. It uses illegal weekly tourist rentals to such an extent that most people are surprised to learn it is not a legal tourist hotel.

To close this loophole, Peskin’s legislation requires that designated residential hotel rooms be rented for no less than a month. That means that a tourist will have to pay a month’s rent to stay in a San Francisco SRO, an extremely unlikely occurrence.

And that is why changing times requires a change in the HCO. The Internet has created a capacity to run a residential hotel entirely on weekly tourist rentals that was not possible when the HCO passed in 1980 or was strengthened in 1990.

In 1990, it was not easy for a residential SRO owner to reach a weekly tourist market. Now, all they have to do is advertise a weekly tourist rate online that represents a good deal for a tourist looking for a three-four day stay. The guest pays a weekly rate of say $400, leaves after three-four days, and the room is then rented for three days to another “weekly” guest.

This practice nets the SRO roughly double the monthly rent for the room they would get if they instead followed the law and rented to permanent tenants. It’s no wonder so many hotels are now using the weekly rental practice.

That’s why San Francisco  must return residential hotel rooms to the permanent residents that the law required them to house over 35 years ago. These hotel designations were based on the hotel’s actual use. That means the Tropicana was a 100% residential hotel historically, and should be the same today.

That’s what the law signed by Mayor Dianne Feinstein, herself an SRO owner, intended back in 1980. Buyers of residential SROs pay a much lower price than for a tourist hotel, and are effectively cheating legal tourist hotels by renting their residential SRO’s to tourists.

It is an incredible scam that San Francisco’s housing stock cannot afford. And the Supervisors now have a chance to put an end to it.

Aaron Peskin has been eager to stop this abuse from the first moment I mentioned it to him. His legislation would immediately add hundreds and possibly over a thousand of  SRO rooms to the existing scarce supply.

The vast majority of these rooms will be priced for working tenants who cannot afford more costly studio apartments. SRO’s historically housed this population, and if the Board of Supervisors approves this legislation they will again.

And as an added bonus for the Board: it will added to the housing stock for working people through preservation and enforcement, without spending public funds.

Thanks the Land Use Committee—comprised for this legislation of Peskin, Supervisor Malia Cohen, and new Supervisor Jeff Sheehy—for getting 2017 off to a good start for San Francisco tenants by passing this legislation. Now its on to the Board for what is expected to be certain passage.

Randy Shaw is Editor of Beyond Chron. He describes how the HCO helps stop gentrification in his book, The Tenderloin: Sex, Crime and Resistance in the Heart of San Francisco.