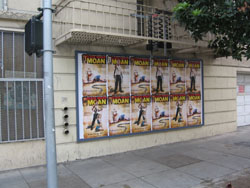 In March 2002, San Francisco voters overwhelmingly approved Proposition G — which banned all new billboards, or specifically “outdoor commercial advertising signs.” But now an alarming number of “re-plastered posters” (i.e., small billboards) have proliferated throughout the City – on the sides of apartment buildings, such as in the adjoining photo.

The building owners rent out the wall space to these rogue billboard companies, and until now the Planning Department has inefficiently tried fining the building owners for this practice. But Aaron Peskin has sponsored a new Ordinance – which unanimously passed the Board of Supervisors yesterday – that will hopefully put an end to this unlawful practice.

“I’m seeing these news posters all over San Francisco,” said Marcie Keever, Program Director of San Francisco Beautiful – a local non-profit that was behind the effort to pass Prop G. Here in the Tenderloin, Beyond Chron staff has already found two of them within just a one-block radius of our office – on Turk Street (at Hyde), and on McAllister Street behind the Abigail Hotel.

First, the Ordinance will define these violations for what they are — a “public nuisance.” Second, it changes the definition of who is a “Responsible Party” that the City can go after – from just the building owner to the billboard operator. The trouble is, most of the time we don’t even know who put up these billboards. So if the operator’s identity is unknown, a Notice of Violation will be posted on the billboard alerting them.

After a Notice of Violation is sent, the billboard operator will have 45 days to take it down or else face fines. The fines depend on the size of the billboard, ranging from $100-per-day if it is smaller than 100 square feet, to $2500-per-day if it is over 500 square feet. Such a penalty is likely to help discourage these posters – which were clearly designed to be an end-run around the City’s ban on large billboards.

Once notified of the violation, the billboard operator will have to file a permit with the Planning Department to remove their illegal operation. The Ordinance also formalizes the Hearing procedure to assess the fines – and gives the billboard operator a chance to request a Reconsideration Hearing, but at his or her expense. Finally, the Ordinance calls for the Planning Commission to review its effectiveness one year after it goes into effect.

While this Ordinance could help crack down on these rogue billboards, the City does have another alternative at its disposal. Under Section 17200 of the California Business & Professions Code, the City can sue these billboard operators for Unfair Business Practices. These billboards are illegal, and the practice is putting these operators’ competitors at a competitive disadvantage.

Meanwhile, San Franciscans should know that these billboards are illegal and act now to get the City to crack down. If you see one of these so-called “re-plastered posters” spruced up in your neighborhood, file a complaint with the Planning Department’s Code Enforcement Team by calling 575-6863.