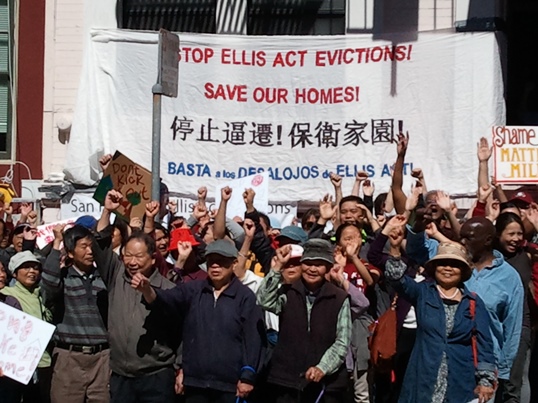 SF's tenant movement must be heard at City Hall

*A massive, only in San Francisco rent control loophole that allows huge operating and maintenance passthroughs continues to cause tenants hardship without Supervisor action;

*The Board placed many measures on the November ballot, but none strengthened rent control or eviction protections;

*Tenant protections were a defining issue in only one supervisor campaign, and that effort—Dean Preston in D5—got little progressive support outside tenant groups;

What have pro-tenant supervisors been working on instead?

David Campos spent the summer and fall trying to pass Prop H, his measure to create a Public Advocate.  Now he is spending his remaining time in office understandably focused on securing legal representation for undocumented immigrants.

Aaron Peskin spent the same period working to pass multiple ballot measures. He has also gained national attention for his investigation into the leaning 58-story Millennium Tower. This is important work, but this battle between millionaires has little relevance to the daily concerns of the city’s hard-pressed tenants.

Campos and Peskin also prioritized new Airbnb regulations, which tenant groups strongly support. But these new rules do not help tenants in place. And while those of us who believe housing supply matters see tenants benefiting from the return of illegal short-term rentals to the residential market, many activists see these  “market rate” housing units as facilitating gentrification.

Longtime tenant supporter Jane Kim was tied up in her State Senate race. Staunch tenant advocate Eric Mar is about to leave office, as is John Avalos. Avalos spent the fall preoccupied with defeating Asha Safai, and ensuring  Safai did not get credit for new affordable housing in D11. If Norman Yee even mentioned tenants in his re-election campaign it did not make the news; Yee has voted with tenants on rent control measures but does not take the lead.

Much of the political downgrading of tenant concerns is attributable to the untimely death of San Francisco Tenants Union leader Ted Gullicksen in October 2014.

Ted always prioritized rent control and eviction issues, with broader affordable housing issues secondary. Ted always felt more could be done to strengthen tenant protections, and spent time passing new laws even at the expense of having time to educate tenants on measures that got passed.

Ted’s constant demands that supervisors pass laws to help tenants in place kept Board members on their toes, and always moving forward on the tenant’s agenda.

Gullicksen’s personal influence with individual supervisors could not be easily replaced. Since his death the city’s tenant groups have paid far more attention to affordable housing issues, with the passage of laws impacting rent controlled tenants in place getting less focus.

This partially explains why supervisors eager to boost pro-tenant voter turnout still did not put a rent control/eviction protection measure on the ballot (such as one stopping the operating and maintenance loophole that is costing tenants dearly). The supervisors were under no pressure to so act.

Coalitions between nonprofit housing groups and tenant organizations are important. But it’s time for this coalition to focus on stopping outrageous rent hikes to longterm tenants, halting owner move in eviction scams, and on securing sprinklers in apartments to stop tenant displacement.

San Francisco faces a new political landscape. The “progressive” and “moderate” labels obscure rather than illuminate a supervisor’s politics, and the focus should instead be on where they stand on specific issues.

What better opportunity for current and new supervisors to brand their political identities in 2017 than to support legislation helping tenants avoid unjustified rent hikes, scam owner move in evictions, and displacement by fire. The timing is even more critical, ase many of those needing these protections will be put at risk by the Trump Administration.

Randy Shaw is Editor of Beyond Chron. He discusses the rise of the San Francisco tenants movement in The Activist’s Handbook.