Supervisors Weigh in on Halloween

by Alison Stevens Rodrigues on October 31, 2005 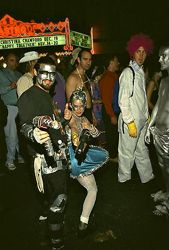 While Halloween’s origins date back to an ancient Celtic religion, the holiday has more than caught on in the United States. With Americans spending an estimated $21 million on candy each Oct.31, it should come as no surprise that 93 percent of U.S. children will go trick-or-treating this year, according to the National Confectioners Association. But should this tradition be upheld in San Francisco? Is the city safe enough for children to go form door to door, soliciting complete strangers for candy? Supervisors weigh in on this and divulge what they will be doing on All Hallows’ Eve.


With regards to trick-or-treating in District 10, which includes Bayview/Hunter’s Point, Supervisor Sophie Maxwell thinks it “a great idea,” she said, adding that as with any other area of the city, children should be cautious when going out there at night.

“We should be careful and vigilant, yes,” said Maxwell. “But we should not teach our children fear.”

Supervisor Michela Alioto-Pier, who has two children, aged two and four, agreed. While she noted that adults must proceed with caution and remind children to not go out alone, to stick with a buddy and to inspect all candy before eating it, Alioto-Pier also said children should not fear their neighborhoods.

In her district, which is comprised of the Seacliff, the Marina and the Presidio, Alioto-Pier said there are some great places to go trick-or-treating, including Jordan Park and Pacific Heights – where she used to go as a young girl. Now, all grown up, Alioto-Pier said this Halloween she will take her children to St. Francis Wood for a party where they will have others their age to play with.

On the other hand, Supervisor Chris Daly said District 6 is not the best place for small children to go trick-or-treating. Daly, who has a small child himself, one-year-old Jack, said that because a lot of people come into the city from elsewhere to “live it up,” the downtown area probably is not the safest for young ones. That is why, instead of spending the holiday at the Tenderloin Recreation Center, which is what he has done in the past, Daly said this year he will be spending Halloween with his wife and son, who will be dressed up as a Holstein cow.

Southwest of Daly and his calf, Elizabeth Curly O’Malley, a project development manager with TechSoup, will be trick-or-treating with her Ozians. Hazel, 3, is going to be dressed as Dorothy Gale, while Frances, 1, will be donning a Munchkin costume. O’Malley, who lives in the Mission, said people in that area are extremely kind to children.

“People bring their kids out in this neighborhood and everyone is so respectful,” O’Malley said.

Still, she admitted that she and her girls will not make trick-treating in the Mission an all-night affair. In fact, after they collect candy from local merchants, who make sweets readily available to those in costume, O’Malley said she and her family will be going to the city of Fair Oaks for its Safe Halloween Trick-or-Treating.

While Supervisor Sean Elsbernd, District 7, does not have any children of his own, he said he understands the desire that parents have to keep their young trick-or-treaters safe.

“It is of course disappointing that some families are concerned about going trick-or-treating, and it is indicative of the continued need to step up patrols and to encourage and assist the Police Department in their efforts to help the community feel safe,” wrote Elsbernd in an e-mail to Beyond Chron.

Still, Elsbernd recalled that even when he was growing up in San Francisco twenty years ago his parents went trick-or-treating with him.

“Part of the fun was experiencing it all with my parents,” wrote Elsbernd, who tonight will be passing out candy with his fiance.

For those in search of thrills and chills, the supervisor recommends going to Wawona Street between 14th Avenue and 15th Avenue, where residents have decorated their homes and will create haunted houses for young children.

Meanwhile, this morning, Supervisor Fiona Ma, District 4, will be at the Corner Cup cafe at 9 a.m., she said. Located at 3655 Lawton Street, the Corner Cup has, in its own way, “adopted” the nearby Francis Scott Key Elementary School and each year gives a treat to every student who arrives in costume, said Ma.
And in his district, which includes the Haight-Ashbury, Inner Sunset, Western Addition and Ashbury Heights, Mirkarimi hopes to attend more than one community trick-or-treating event today, as well as a neighborhood block party tonight.