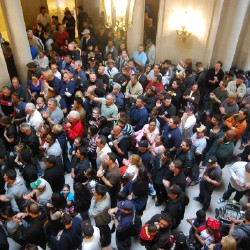 Last week, the Board of Supervisors voted to save 500 front-line jobs at the Department of Public Health. But Mayor Gavin Newsom refuses to spend the money, and there’s nothing in the City Charter to stop him. Even if there was, the approved funding simply “borrows” from other salaries in the Health Department – which will be backfilled after we get federal funds via state legislation. No one knows exactly when we will get that money (although it seems like an eventual guarantee), but meanwhile the Mayor holds the trump card. The Board can’t force Newsom to spend it, but one thing they can do is cut funding elsewhere – and it’s time to start using their power to tie the Mayor’s hands. It is time for the Board to start de-funding parts of the Police and Fire Department budgets, even if such a move will provoke another angry mob scene. Because borrowing from Peter to pay Paul will not save these front-line services, as the Mayor orders all Department Heads to propose unilateral mid-year cuts by the end of the week.

We’re starting to see the same unfortunate scene at City Hall, repeated every few months. The Mayor plans to cut the Health Department, which means low-paid front-line workers get laid off – and poor people are adversely affected. SEIU and other progressive groups mobilize to lobby the Board of Supervisors, and get a sympathetic ear to stop these cuts. But then the Controller explains our City’s dire budget situation, and the question arises how we’re going to pay for it. The Supervisors vote to restore the cuts, but the Mayor still has discretion to not spend the money – and pretty soon the cuts go into effect.

One can certainly argue it’s a fatal flaw in our Charter. The Supervisors hold the “purse strings” of government, but they cannot mandate that money be spent. All they can do is de-appropriate funds to stop the Mayor from spending money, and even in those cases it must be a veto-proof majority. But Chris Daly’s Charter Amendment failed in July to get six votes at the Board for voters to weigh in (even if it had, Newsom had vowed to defeat it at the polls), so we’re stuck with the system as it is for now – whether we like it or not.

At last week’s Board meeting, progressive Supervisors argued it was unfair to balance the City budget on the backs of low-income workers – once again saying we must “share the pain.” But “share the pain” implies that cuts will be made elsewhere, and the Board must move to de-appropriate other parts of the budget to reflect the crisis we’re in. “We have to look at the entire workforce,” said Budget Committee chair John Avalos. “It has to go across the Board.” And there’s the rub – it takes courage to start de-appropriating funds.

Naturally, there are easy targets for progressive Supervisors – but it’s not much money.

We could de-fund all of Newsom’s five press secretaries, the Office of Criminal Justice, and Office of Neighborhood Services – and it would only save the City $1.8 million (i.e., how much it costs to keep the laid off health care workers employed for two months.) The Community Justice Center is a frequent target, but its total budget is $2.4 million – with much of it from federal grants. Aaron Peskin proposed a series of de-appropriations last December – but only $8.5 million. “It’s chump change,” said Ross Mirkarimi. “It’s decimal dust.”

The Board should start cutting Newsom’s Pet Projects now – rather than wait for the next round of mid-year cuts. Had the Budget Committee publicly voted to de-fund them last June, it would have strengthened the hands of John Avalos and David Chiu when they entered negotiations with the Mayor – which maybe could have resulted in a better budget deal. But let’s not delude ourselves into thinking such cuts will save enough crucial services.

Finding the money we need requires cuts in the bloated Fire Department (whose budget is ten times the size of the Mayor’s Office), and the Police Department (which is 17 times bigger.) But these cuts have a constituency – and making de-appropriations is politically dangerous. John Avalos had to endure recall threats when he proposed it in June, and the Firefighters Union stormed City Hall.

Nevertheless, there are places in the Police and Fire Department where cuts are essential. With the Mayor suggesting he will spare them from the worst budget cuts this year while health and human services get slashed, it is only appropriate for the Board to make de-appropriations – so we all share the pain. “If we recalibrate the size of our [City] workforce,” said Ross Mirkarimi at last week’s Budget Committee, “we have to recalibrate political decisions that are made.” This budget crisis demands that we reform these departments.

Police Department: Right now, the City has about 500 uniformed cops doing civilian jobs – despite a 2004 Charter Amendment that mandated civilianization. In other words, trained police officers are doing work that lesser-paid employees could be doing. If they were out walking the beat, we would not have to hire more cops. A report last December by the Police Executive Research Forum advised the Department to civilianize certain position, but Newsom’s budget ignored it. The PERF report also said 34% of the Oakland Police Department is civilian employees, and most cities are anywhere between 19 and 28%. In San Francisco, it’s less than ten.

Fire Department: The Board of Supervisors cut $6 million out of the Mayor’s proposed budget for the Fire Department last year – but more can be taken out. Beyond Chron identified $8.25 million in waste that could be de-appropriated – without requiring the City to re-open the union contract with the Firefighters. These reforms included downsizing the number of battalion chiefs, a 10% across-the-board pay cut for top-level management and re-visiting the City Controller’s 2004 report that advocated reasonable rolling brownouts.

Demand Serious Labor Concessions: While SEIU City workers voted to give back paid holidays and state employees agreed to more furlough days, it’s time to ask police and firefighters to make real concessions as well. The Mayor’s Office will claim the Police already “gave back” $10 million in their contracts. But all they really did was postpone part of their 23% pay raises that (temporarily) saved the City some money. It’s time to acknowledge the deals Newsom cut in 2007 to seal his re-election were fiscally unwise – and we now have some of the highest paid cops and firefighters in the country.

One mistake in those contracts was a failure to control retirement costs. Voters approved 90% pensions for cops and firefighters in 2002, but the promise was that it wouldn’t cost the City more money. This year, the City has to pay an extra $12 million in contributions to the police retirement fund – because the 2007 contracts failed to account for sufficient employee contributions. It’s time to see if police and firefighters are really putting in an adequate percentage of their salaries to their fund (compared with how it is in other jurisdictions.)

After I criticized the Mayor last week, a reader sent us the following feedback (published as a Letter to the Editor): You criticize Newsom for the 46% increase in the Police Department’s budget, and note that most of the money went to pay hikes for police officers of up to 24% under the contract approved by Newsom in 2007. Didn’t the Board of Supervisors approve the same contract? I’m not a Newsom fan, but shouldn’t you be consistent?

I can’t disagree with that. It’s time for the Supervisors to play hardball – and make the tough budget decisions that are likely to ruffle a few feathers. Standing up to the Mayor to save Health Department jobs is one thing. Going after the “sacred cows” in the City budget is quite another, but has become necessary in these very tough fiscal times.