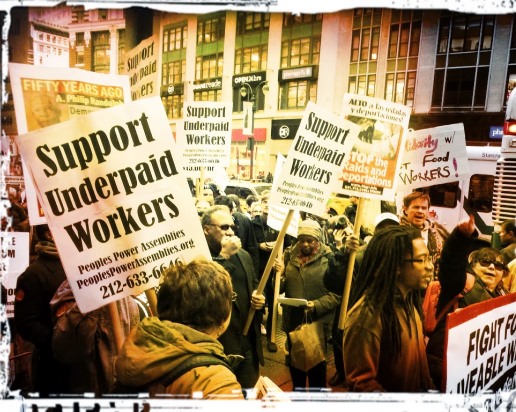 In the late evening of June 25, the San Francisco Board of Supervisors reached a budget deal that stiffed the city’s nonprofit workers. The Supes gave nonprofit workers only a 1.5% raise, after approving increases from 2.25%-5% for already higher paid city workers.

Giving larger raises to already higher paid workers goes against the Board’s goal of reducing inequality. The city is flush with cash, and after nonprofit staff went years without any raises prior to 2012, it’s an outrage that the Board believes a 1.5% raise is sufficient.

How did this happen? I know the Supervisors, and if you asked them directly if they thought nonprofit workers deserved more than 1.5%, and raises at least equal to those awarded city workers, they would agree.

Supervisors would also agree that it is tough  for “working people” in San Francisco to get by. So why didn’t they do one of the few actions within their power to help working people by giving them adequate raises?

Perhaps the Board felt that raising the local minimum wage took care of the city’s nonprofit workers. But if any member felt this way, they are out of touch with the realities of the city-funded nonprofit workforce, most of whose workers earn more than the new minimum wage but who still need help attaining a living wage.

Nonprofit workers earning $30,000 a year earn above the minimum wage but still quality as low-income. They deserved a better shake from the Supervisors than to get the smallest raise the city granted to any workers this year.

The Path to Unfairness

In looking for answers, start with the Board’s unannounced decision to push its budget vote up a day from June 26 to June 25. Although a budget committee hearing had been scheduled for June 26, and nonprofit workers and other groups prepared for a turnout that day, the budget deal was completed the preceding day.

This action enabled the Board to avoid confronting nonprofit workers angry over the minimal raise. It’s easier to deny people a fair pay raise when you can cast a vote outside their presence. And while some people got word from supervisor’s offices that the vote had been moved up a day, there was no public announcement or process alerting those planning on attending the June 26 budget hearing (nonprofit workers testified the preceding week, but the presence of those impacted by budget decisions is most critical on the day the vote occurs).

SEIU Local 1021 learned about the plan to reach a budget deal one day early in the late afternoon of June 25 (Supervisor Jane Kim even used the #onedayearly hashtag in tweeting about the budget deal after it happened). It was too late for SEIU to suddenly mobilize workers, leaving primarily staff rather than actual workers to testify.

Supervisor John Avalos, who was seen as the Budget Committee member most committed to the nonprofit cause, did not lift a finger to get nonprofit workers more money. Every account of the evening I have heard found Avalos more concerned about getting a deal done that night than in making sure nonprofit workers got a fair raise.

Supervisor Jane Kim, whose District 6 includes the most nonprofit workers, was also curiously uninterested in fighting for a higher raise for them. Kim led the effort to get nonprofit raises in the big budget fight of two years ago, but this year did nothing. Nor did her office alert the many nonprofits in her district that they needed to get down to City Hall post-haste due to pushing the vote up a day. When asked why she did not wage a fight to get higher raises for nonprofit workers, Kim cryptically implied that it could not get done.

Why it “couldn’t get done” is a mystery. But once Avalos and Kim, who worked for nonprofits and championed raises in the pas, were not up for the fight, their colleagues went along. While the full Board could theoretically vote down the budget, that’s a virtual impossibility now that all the money deals have been cut.

Is Mayor Lee to blame for only including a 1.5% nonprofit raise in his budget? He sure would be had the mayor’s office refused to budge from that figure despite Board pressure.

But everyone I spoke with when the mayor released his budget saw the 1.5% as a starting point. Supervisors always raise the amount in the mayor’s budget, so if the mayor’s office wanted to end up at 2% or 2.25%, it needed to start lower (and nonprofits were demanding 3% with the assumption that they would also accept an amount closer to 2.25%)

But unlike past years, the Board simply accepted the mayor’s 1.5%. I talked to a lot of people about what went down on the night of the vote and nobody claims that the mayor’s office fought the Board’s efforts to give nonprofit workers a larger raise. And if Mayor Lee had been responsible for giving nonprofit workers the shaft, you can be sure that Supervisor Avalos would have made sure the public knew about it.

I believe all of the Supervisors appreciate nonprofit workers contribution to San Francisco. But when they had the chance to show this support in the form of putting money in the pockets of nonprofit workers, they dropped the ball.