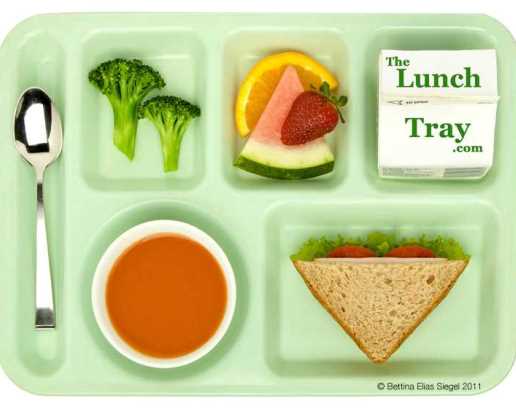 A new study published in the Journal of the Academy of Nutrition and Dietetics (subscription only) finds that home-packed lunches are nutritionally lacking, as compared to school food.

As summarized by Reuters, the study’s researchers peered into the lunch boxes of 626 third and fourth graders from 12 public elementary schools in Eastern Massachusetts, and found that only 34% of lunches contained fruit, only 11% contained vegetables, 42% contained snacks and 28% included dessert.  And almost one-quarter of the lunches contained sugar-sweetened beverages.

I wasn’t terribly surprised by these findings.  Even before I started The Lunch Tray, I’d read in Janet Poppendieck’s Free for All: Fixing School Food in America references to data showing that, on average, children who regularly eat the federally subsidized school meal consume a wider variety of nutrients than those who consistently eat a home-packed lunch.  That makes sense, given that food service directors must ensure that their menus meet strict, government-mandated nutritional requirements, while parents (at least this parent, anyway) often pack whatever happens to be in the fridge that morning, and also often cater to a child’s preferences by packing many of the same items on a regular basis.

And there’s no question that some home-packed lunches (such as some seen by researchers in this study, which contained two or three sugary drinks and no entree at all) are completely deficient from a nutritional perspective.  At the same time, though, one visit to Pinterest or to many “mom/food” blogs will also show that some parents out there set an extremely high bar when it comes to nutritious home-packed lunches.

It’s also important to note that many parents feel that school meals, despite checking off the requisite boxes when it comes to nutrients and food groups, contain too many highly processed foods, chemical preservatives and artificial additives.  That’s the main reason why I still have some concerns about the food in my own district (Houston) which, though it’s working hard to cook more meal components from scratch, still relies on processed food manufacturers for many of the items served.

Whatever you think of this study’s findings, though, it reminds us that the new school year is only a few weeks away.  So stay tuned for The Lunch Tray’s FIFTH (!) annual “It Takes a Village to Pack a Lunch” series, in which I share lunch box recipes, packing tips, experts’ guest posts and news about the latest lunch box gear.   Also, speaking of Reuters, I was interviewed last week for another story the news organization is doing about home-packed lunches, and I’ll share that  link with you here when the report is published.

This piece originally appeared in the lunch tray: