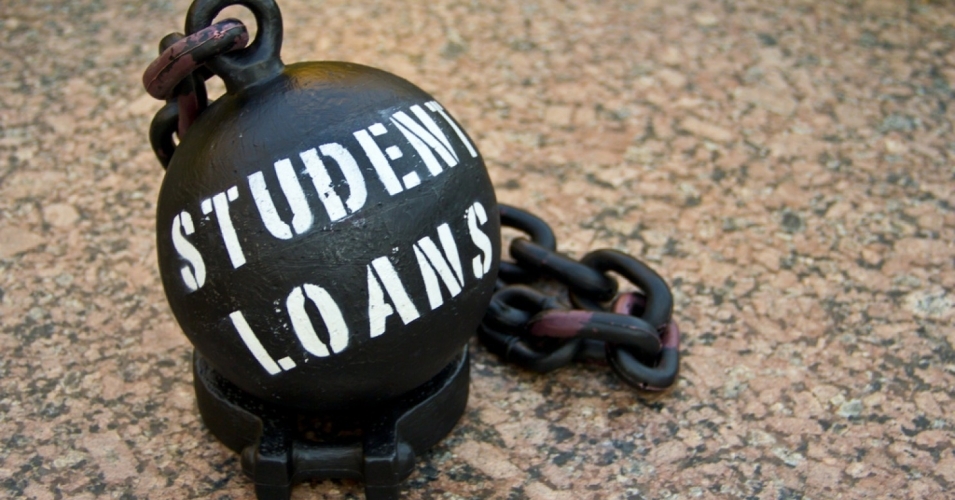 Most of the discussion about student debt in the United States has centered on its excessiveness, the negative impact it has on home-buying for the next generation, various refinancing schemes, and (for the grossly uninformed) how borrowers simply need to ‘pay what they owe.’ However, the untold story of student loan debt in the United States is that it is being used as a form of economic terrorism designed to not only redistribute wealth from everyday Americans to the elite, but also to undermine and degrade American democracy as a whole.

Up until her confirmation as Secretary of Education, Betsy DeVos had financial ties to a large student loan servicer in contract negotiations with the Department of Education. PRWatch reported in January that one of the firms DeVos divested from — LMF WF Portfolio — helped finance a $147 million loan to a student debt collection agency called Performant, which had more than 346 complaints brought against it with the Better Business Bureau. The student loan industry is said to be worth $1.3 trillion dollars in total debt owed, according to Forbes. While some might be quick to chalk this up to successful business management, it’s important to evaluate just exactly how the student loan industry works.

Contrary to what most students believe, many loans supposedly from the U.S. Department of Education are actually owned by big private banks. This acquisition of federal student loans by big banks was first introduced by the Federal Reserve in November of 2008, in which student loans, along with other forms of debt, are bundled and re-sold to banks as Asset-Backed Securities (ABS). A few months later, with the blessing of former Treasury Secretary Tim Geithner, this program was dramatically expanded to include more than $1 trillion in collateralized debt. This means that for many borrowers, they’re being jerked around by private loans deliberately dressed up in US Department of Education attire.

In a lecture delivered at Carleton University in Ottawa 2011, famed MIT professor and linguist Noam Chomsky argued that the American student debt system fosters fear and insecurity among people who, burdened by financial stress, anxious for their jobs or stuck in low-paying jobs, are afraid to question or challenge the system.

“When you trap people in a system of debt, they can’t afford the time to think,” Chomsky said.

One indebted borrower, Denise, whose fiancee, Kevin, spoke to Common Dreams on condition of anonymity out of fear of retribution, is living proof of the dilemma Chomsky presented.

“I’ve wanted to marry Denise for years now,” Kevin said. “But after seeing what she’s been put through with these student loan companies, I honestly don’t want to risk having a bunch of crooks stealing my paycheck or my tax refund.”

According to Kevin, the student debt Denise acquired for four years of higher education totaled approximately $35,000. Under the management of student loan servicer Navient (which broke off from Sallie Mae), her student loan debt quickly swelled to over $75,000 in less than ten years following her graduation from the University of Arizona. According to Kevin, loan fees and high interest rates quickly snowballed as a penalty for Denise not having enough money. (Multiple requests to reach Navient executives by phone or email were not returned.)

“The monthly payment they demanded was three times what Denise paid for her rent. She would send what she could afford, but it would end up being a fraction of the penalty fee they’d add to her loan balance for not having enough money to pay. They would then charge her interest on the penalty fee as though it were money she actually received for school,” Kevin said.

Kevin’s account of what happened to Denise is likely happening to millions of other distressed borrowers. A March 20 report from Bloomberg detailed how Secretary DeVos is now green-lighting punishing new fees on student borrowers even if they agree to make good on their outstanding debt. In a memo to the student loan industry, DeVos’ agency is allowing companies to charge struggling borrowers as much as 16 percent more of a debtor’s total loan balance in additional fees.

“It’s a con game that caused Denise so much stress that it began affecting her health and even made her fantasize about taking her own life as a means of getting out from crippling debt,” Kevin said. “These companies use the authority of the government to extort money from people who took out loans they thought were from the government and not just some crooked bank.”

In some instances, the tax refunds Denise counted on each year would be confiscated as penalty for not having enough money to pay her loans. According to Kevin, Denise earned a social sciences degree with the specific intent of pursuing a career that involved helping people and supporting positive change in society.

“Instead of doing that good work, she was forced to cling to whatever low-wage position she could find,” Kevin continued. “Even after I used my savings to help pay off the remainder of her student debt, the loan servicer, Navient, kept refusing to credit her account for the payment and continues to damage her credit.”

“It has taken such a huge toll on us,” he added. “I guess now we’ll have to gather more money to file a lawsuit to get them to acknowledge that they received payment in full. In the meantime, they can still take her tax refunds even though she doesn’t owe them money anymore.”

Ironically, the Federal Student Loan Program was intended to make higher education affordable for students and families that lack the ability to pursue higher education without funding support. With the insertion of predatory banks and student loan shark-servicer companies like Navient, Strada Education Network (formerly known as USA Funds), and others, the soul of the Federal Student Loan Program has shifted from that of opportunity and advancement to profit and subjugation.

Denise’s situation is just one example. Recently, Secretary DeVos announced that the Public Service Loan Forgiveness agreements the Department of Education made with borrowers who agreed to work in the public service field for at least 10 years might not be honored. The New York Times reported in March that students who signed up when the program began in 2007 may now be on the hook for those loans after all. A recent legal filing from the Department of Education argues that FedLoan Servicing’s approval letters for the loan forgiveness program are non-binding and can be rescinded at any time.

This means borrowers, who deliberately chose professions in public service and that are routinely paid less than those with jobs in other sectors, could now not only have forgone a much higher salary for over a decade, but could also find themselves on the hook for loans that the Department of Education agreed to forgive in exchange for their service.

Denise is not alone — the New York Fed reported earlier this year that 44 percent of student loan borrowers are underemployed. This means seemingly benign decisions when it comes to student loan policy ensures that a vast net of stress, fear, and insecurity is cast upon an entire generation. The lasting impact will, by default, stifle and root out any inclinations of challenge to the current political and economic system. In this way, the student loan industry is suppressing resistance to societal change by low-income Americans, ensuring that whatever steps are taken in the name of neoliberalism to tighten the corporate grip on American society will be met with little to no resistance.

Who Has the Moral High Ground?

President Trump’s Fiscal Year 2018 budget includes a provision requiring already cash-strapped student loan borrowers to pay higher monthly fees on income-based repayment plans. While there is no evidence showing how an increase in payment requirements is needed for an already grossly lucrative industry, the Trump budget prioritized steep cuts to Medicaid, Food Stamps, Social Security and Disability Insurance, while also raising monthly payments for student loan borrowers. The combination of these two policies is a crushing blow for underemployed student debtors like Denise.

“[L]ends at interest, and takes profit; shall he then live? He shall not live. He has done all these abominations; he shall surely die; his blood shall be upon himself.”

Often, the Republican Party campaigns on being the morally superior party based on its stance on issues like abortion and contraception. In one instance, Rep. Jodey Arrington (R-Texas) took a Bible verse out of context to justify cutting food stamps during a House Agriculture Committee hearing.

However, the moral outrage in response to the student loan industry’s pillaging of the next generation of Americans has been met with deafening silence by the GOP.  One would think that a majority in the House, the Senate, and control of the White House would motivate the GOP to address an issue that affects 44 million Americans, but it has not. One would think that a party whose platform is based on concepts of morality and fiscal responsibility would proudly take on an economic and political issue affecting an entire generation of young people, but they have not.

However, Democrats aren’t entirely blameless in the student loan debacle. While a recent effort to address the greed and usurious practices of the student loan industry was championed by progressives like Sen. Elizabeth Warren (D-Massachusetts), Patty Murray (D-Washington), and Tammy Baldwin (D-Wisconsin), other neoliberal Democrats like Sen. Cory Booker (D-New Jersey) have joined the GOP’s morality farce by teaming up with the private sector to ransack public schools and gut teacher’s unions in the name of “school choice” and “teacher accountability.”

If Republicans and Democrats alike hope to hold on to any credibility when it comes to morality, they must take steps to address the student loan industry in favor of the hardworking Americans who put them in office, not their corporate masters.