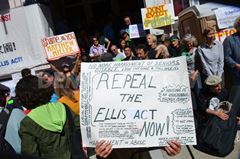 At the heart of San Francisco’s rising Ellis Act evictions is this troubling fact: tens of thousands of elderly, disabled and other longterm renters go to sleep each night fearing that they will be the next to lose their homes. That’s a form of economic terrorism. And it is precisely what Ellis Act speculators have waged against San Francisco residents since the late 1990’s. It has spread fears of displacement that the city sought to mitigate when it enacted just cause eviction laws in 1979, but which the misuse of the state Ellis Act has revived.

Let’s be very clear: local measures can do very little to stop Ellis Act evictions. Yes, we can give priority to Ellis victims for obtaining new nonprofit housing. We can increase Ellis relocation payments, impose higher building code requirements for conversions to tenancies in common, and further restrict unit mergers where tenants were evicted for no-fault. But the only real ways to stop Ellis Act terrorism is to change state law so that San Francisco is either exempted from the Act, or the Act is amended to require a five year holding period before San Francisco owners can invoke it.

The recent flurry of attention to Ellis Act evictions reminded me of Lola McKay, the 82 year old whose Ellis eviction attempt by real estate speculator John Hickey in 1999 first brought citywide attention to the Act’s misuse. McKay’s attorney, Raquel Fox of the Tenderloin Housing Clinic (which publishes BeyondChron), was able to delay the eviction long enough so that McKay was still living in her Alvarado Street home in Noe Valley when she died in 2000. McKay lived in her unit for 42 years.

Hickey was later sentenced to federal prison for real estate fraud and elder abuse. He remains the archetype for the Ellis Act eviction speculator.

For all of the outrage generated by McKay’s eviction and many others, there has been no citywide coalition or San Francisco lobbyists working up in Sacramento to stop Ellis Act abuse in Sacramento since her death in 2000. The Tenderloin Housing Clinic worked with then-Assemblymember Mark Leno to successfully exempt SRO’s from the Ellis Act in 2003, but this effort occurred largely out of the public limelight.

The political environment is very different today. Ellis Act evictions are now so predominant, and are covering so many larger buildings, that tens of thousands of tenants who never thought twice about the Ellis Act now can’t stop thinking about it.

There’s something terribly wrong when a city’s longterm tenants live in daily fear of being uprooted from their homes, neighborhood and perhaps the city itself. And that’s why for the first time we have a San Francisco mayor publicly committing to go up to Sacramento to amend Ellis, and why a broad-cross section of people who do not work on tenant issues must get involved to win this state battle.

And make no mistake—this is a state battle.

We have tried time and again to pass local measures to stop Ellis abuse and continually run up against judges who determine that our regulations “impermissibly interfere” with the Ellis Act’s statutory rights. We can work around the edges of Ellis locally, but nobody should believe that local action can meaningfully reduce Ellis Act evictions (for example, a citywide “moratorium” on evictions would not impact Ellis cases).

If we can get San Francisco entirely exempted from Ellis, fantastic. If we end up with a five-year ownership period before Ellis can be invoked, most speculator evictions will be stopped. Considering that the Ellis Act was enacted to allow longtime owners to “go out of the landlord business,” it makes no sense for people who are not in the landlord business until they buy a property and invoke Ellis the next day to be allowed to benefit from the Act.

We can win this battle to reform Ellis next year. But it will take what I describe in the new edition of The Activist’s Handbook as a rounding up of the “unusual suspects” to build a winning coalition.

This means that some activists who prefer only working with people and groups with whom they agree 99% of the time will have to join with interests they may oppose 90% of the time—but who can bring important support in Sacramento.

This means a coalition including tech, infill developers, and business groups. It means working to keep local landlord and realtor groups neutral. It means creating the type of broad cross-section of support for amending Ellis that tenant groups joined in the June 2008 state No on 98 campaign regarding eminent domain—where much of the campaign’s funding came from powerful water development interests who could care less about rent control.

Sacramento is a very different political world from San Francisco. When I met with state legislators in 2003 about exempting SRO’s from Ellis, most knew almost nothing about SRO’s nor the Ellis Act. All they knew about Ellis is what we and the opposition told them.

That’s why many activists find the Sacramento political scene enormously frustrating. But it sure is rewarding when you win.

Mayor Lee is committed to assembling the diverse citywide coalition that can bring Ellis reform home in 2014. And everyone who thinks it’s wrong for elderly San Franciscans to be thrown out of their longtime homes by Ellis speculators should join this campaign.