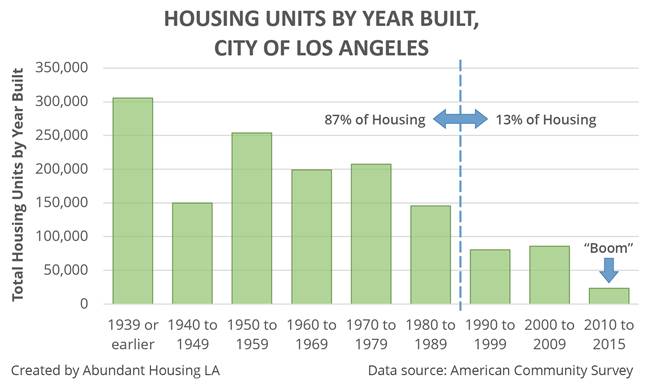 Why did Los Angeles’ Senate delegation vote against SB50? Some cite “cultural” differences with the Bay Area, the power of “equity” groups and the bill not fitting well into Los Angeles’ transit and existing housing landscape.

But seeking progressive explanations for killing the bill misses the key point: opposition to SB50 came from the same political forces that has brought Los Angeles the nation’s worst homelessness crisis, arguably the longest car commutes, and extreme housing affordability.

I describe in Generation Priced Out how Los Angeles’ land use policies have been dominated by two groups: homeowners and landlords. I cite Mike Davis’ legendary 1990 book City of Quartz, which describes affluent homeowners “engaged in the defense of home values and neighborhood exclusivity” as the area’s “most powerful social movement.”  I wrote about many cities with powerful homeowner groups but none rival Los Angeles in their alliance with “equity”/tenant groups in defense of exclusionary zoning.

Why do Los Angeles’ “equity” groups accept the elitist, racist and exclusionary single-family zoning that Bernie Sanders, Elizabeth Warren and Alexandria Ocasio-Cortez denounce?  And why do they not challenge the ongoing unaffordability and economic segregation backed by their political allies representing districts in the San Fernando Valley, Westwood, Brentwood and the city’s entire Westside?

We still await answers to these questions. “Equity” groups talked a lot about protecting “sensitive” communities. But they made no effort to expand economic and racial diversity in the city’s many far from sensitive wealthy and largely white homeowner neighborhoods. Isn’t advancing racial and economic integration what “equity” is all about?  Some equity groups even aligned with Livable California, which flat out opposes new rental housing in homeowner neighborhoods.

Many LA-based “equity” groups are closely aligned with the Paul Koretz’s and Bob Hertzberg’s, both of whom fought SB 50 on behalf of owners of multimillion dollar homes. These legislators do not want apartments built in homeowner neighborhoods, notwithstanding the lack of affordability and long car commutes caused by this stance.

Los Angeles legislators were especially outraged by SB 50’s legalizing fourplexes, a section inserted into the bill by the State Senator from Marin County. Notoriously anti-apartment Marin was open to ending exclusionary zoning but Los Angeles was not.

That explains LA’s opposition to SB 50 as well as anything.

Los Angeles’s Senator Henry Stern voted against SB 50 because he said it did not do enough to stop construction in high risk fire areas. He posted on his website, “Last week, I voted against SB 50. But we must act this year— to say yes to safely located housing, rental assistance and homelessness services, and no to more development into areas at risk of another wildfire.”

SB 50 had a provision exempting high-risk fire areas but Stern said it did not go far enough. So East Bay Senator Nancy Skinner took to the floor during the debate on SB50 to offer Stern a choice. She would either support a separate bill completely banning any construction in high-fire areas in his district or would amend SB50 to include that provision.

His bluff called, Stern wasn’t interested in either option. He needed an excuse to kill SB 50 that would not expose him as driving the exclusionary agenda for owners of million-dollar homes; even now he  makes believe that he really wants a housing bill.

The same Los Angeles City Council that voted 15-0 to oppose SB 50 maintains land use policies that bar new apartments from most of the city. Since median home prices now exceed $717,000, the council’s anti-multi-unit agenda denies the working or middle-class the opportunity to become future homeowners in Los Angeles.

Unlike SB 50, Los Angeles does not require builders of projects over twenty units citywide to include on-site affordable units. LA’s “equity” groups opposed affordability requirements in SB 50 that were stronger than those they have locally.

SB 50 also imposed restrictions on demolishing rent controlled housing that Los Angeles lacks. Yet equity groups preferred to keep tenants at risk rather than alienate their homeowner allies by supporting SB 50 (for example, just last week, a six unit rent controlled building in LA was slated for demolition that would have been protected under SB 50).

Los Angeles suffers from displacement and the loss of rent controlled housing caused by the Ellis Act. So why has none of the anti-SB50  Los Angeles legislators introduced a measure to repeal or reform the Ellis Act?

I’ve been involved in every successful meaningful reform to the Ellis Act in the past twenty years. Los Angeles groups have never been involved. Why didn’t the groups focused on defeating SB 50 get a Los Angeles-based State Senator like Ben Allen or Holly Mitchell (both opposed SB 50 on “affordability” grounds) to sponsor an Ellis repeal or reform bill?

If equity groups are said to have had the power to stop SB 50, couldn’t they use their strength to repeal the Ellis Act?

Alissa Walker’s thoughtful Curbed story on SB 50’s defeat stated “SB 50 was opposed by wealthy homeowners—but that’s only part of the story.” I agree. Rich homeowners needed equity groups to provide cover for their elitist and exclusionist anti-apartment agenda, which these groups eagerly did.

What tangible gains did the tenants of Los Angeles win in return for their advocates protecting homeowners from fourplexes and six story buildings on transit corridors?  According to SB 50 opponents, they won a future with less risk of displacement and gentrification.

In actual terms, LA homeowners defeated the biggest risk to exclusionary zoning they ever faced. In contrast, tenants retained the right to commute two hours to work and to pay an unhealthy share of their income for housing.