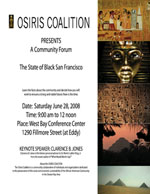 An audience of over 100 people turned out for a panel discussion Saturday at the San Francisco West Bay Conference Center on Fillmore Street entitled “The State of Black San Francisco.” The consensus of the panelists and the audience was that a combination of violence, economics and lack of Black leadership has contributed to a situation that could soon turn San Francisco into a city with only a handful of very rich and very poor African Americans.

The makeup of the panel’s 10 speakers was unusual in that instead of the usual Black task force contingent of ministers, City Hall insiders, elected and appointed officials, the “State of Black San Francisco” panel consisted of community activists, policy analysts and representatives of community based non-profits working with at-risk Black communities.

Lee says San Francisco School District (SFUSD) administrators, teachers and counselors have to tell Black youths and their parents that obtaining a four year degree will be the minimum education requirement for any job that will pay enough to afford a house or apartment in San Francisco. Lee said that counselors cannot wait until high school to start preparing young African Americans for the studies required to get a job that will pay the rent or mortgage in The City. Lee says that African American Black high school students need to walk out of high school ready for college or with skills to work in high paid technical jobs that don’t require a college degree; Lee says that’s not happening now. Lee also said that while city officials make a big deal about efforts to create “affordable housing” in San Francisco, most Black families are moving out of San Francisco because very few of the more than 20,000 units built or under construction since 2000 are affordable or suitable for families with more than one or two children.

Historian John William Templeton said that the decline of Black families is so serious that there’s been a 45 percent drop in the number of Black students in enrolled in The City’s schools and that there are more African Americans enrolled at The City’s ten major colleges and universities than at San Francisco’s elementary and middle schools.

Community activist Sharen Hewitt, director of the Community Leadership Alliance and Emergency Response (CLAER) talked about the increasing homicides of young African Americans in The City and how many African Americans residents, City Hall officials and the media have become desensitized to murders of Black people in San Francisco. Hewitt said there’s a perception that Black victims and perpetrators of violence are gang members or drug dealers; but Hewitt says a growing number of African American murder victims are innocent bystanders who are shot in broad daylight and have no connections to gangs or drug. Hewitt said that African American life had become so devalued among progressives in San Francisco that issues of saving the trees and endangered animals are more important to San Francisco progressives than the murders of Black people in The City

Nation of Islam Minister Christopher Mohammed directly tied the problems of The City’s Black community to San Francisco’s Black leadership. Minister Mohammed cited the recent battle on two Bayview-Hunter’s Point Shipyard redevelopment ballot measures, Prop. G and F, as examples of how The City’s African American leadership can be easily influenced by special interest groups, to the determent of the City’s Black community. Prop. G was a Lennar Corporation financed response to Prop. F, a community based measure that would have required Lennar, the primary developer of the shipyard site, to devote 50 percent of the shipyard development to affordable housing. Prop. G won by a 61-39 percent margin in a campaign where more than $3.4 million was spent by pro Prop. G forces, a record expenditure for a San Francisco ballot measure.

Minister Mohammed said before the battle for Prop. G and F, he had no idea of how close a relationship most Black San Francisco leaders maintained with Lennar and other major City Hall players. Minister Mohammed accused many of The City’s African American city leaders of being “rotten to the core” and charged most of San Francisco’s Black elected officials, community activists and religious leaders with “being in the back pocket” of Lennar.

Minister Mohammed said he had never seen Black leadership in San Francisco organize like the way they worked together to pass Prop G and to defeat Prop F. Minister Mohammed said public policy concerning African Americans in The City was being driven by developers, a trend that was not unique to San Francisco. The Nation of Islam leader said that African American leaders in San Francisco and elsewhere in the country have been so co-opted by special interest groups that they are unwilling to speak out aggressively and critically on issues affecting Africans Americans in The City over fear of losing funding or political support.

Minister Mohammed used the example of the gentrification of East Palo Alto as the blueprint of how the Blacks will be forced out of Bayview Hunters-Point. East Palo Alto was once a low income, mostly African American city across the freeway from Palo Alto, one of the Bay Area’s elite communities that’s also home of Stanford University and nearby Silicon Valley giants such as Google. Mohammed said that after the FBI designated East Palo Alto murder capital of America in the mid 1990s, developers encouraged local police to conduct repeated raids on homes where suspected gang members lived.

Minister Mohammed said that many Black residents not involved with the gangs moved away and law enforcement used no tolerance policies to lock up the majority of young Black East Palo Alto males on gang related charges. East Palo Alto had a 60 percent Black population in 1985 and less than a 20 percent Black population today. Minister Mohammed says that today East Palo Alto is home to a Four Seasons Hotel and a upscale shopping mall; and that developers plan to use similar tactics to move out Blacks in the Bayview, West Oakland and Richmond, all majority Black communities with great weather and prime views of San Francisco and San Francisco Bay.

All the panelists agreed that while San Francisco has one of the highest Black exodus rates of any city in the United States, other cities are experiencing the same problem. There has been a sharp Black population decline from the inner city to the suburbs not only in cities with large Black populations such as Washington D.C., Houston and Atlanta, but also in Harlem, America’s most famous historically Black community. Blacks living on Harlem’s “Striver’s Row” neighborhood once home to Duke Ellington, Adam Clayton Powell and Langston Hughes say they’re feeling the pressure from redevelopment and gentrification to move out.

The special San Francisco Redevelopment Commission meeting on Western Addition Redevelopment will be held on Thursday July 10 beginning at 4 PM at San Francisco City Hall, Board of Supervisors Chambers, 1 Carlton Goodlett Place. The entire meeting will be broadcast live on KPOO 89.5 FM radio and streamed at kpoo.com