SRO Tenants: The Year in Review 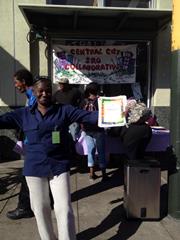 It may be an exaggeration to call 2013 the year of the SRO tenant, but not by much. San Francisco is home to over 200 SRO (Single-Room Occupancy) hotels. SRO’s are home to many low-income residents of San Francisco who have never been more organized. This is in no small part due to the efforts of SRO organizing groups including the Mission SRO Collaborative, the Chinatown Community Development Center, the SRO Families United Collaborative, and the Central City SRO Collaborative (CCSROC). Along with advocates, city officials, city agencies, and public leaders, SRO hotel tenants have made huge gains this year. Here are some highlights.

– In August, CCSROC tenants banged down the door of a California Senate Appropriations Committee hearing where their powerful testimony halted AB 1407, a bill to gut the low-cost phone service LifeLine. AB 1407 would have shifted control of LifeLine from the California Public Utilities Commission to AT&T, raising phone rates for 1.2 million Californians. The LifeLine program allows low-income individuals to stay connected to doctors, family, social support, and to get help in emergencies. Senate staff told the CCSROC tenants that without the testimony, they would have voted ‘yes’ on AB 1407. Talk about David and Goliath: SRO tenants went up against the behemoth lobbying arm of AT&T—and carried the day.

– In February, the Board of Supervisors passed landmark legislation for seniors and people living with disabilities in SRO hotels. Grab bars in showers and near toilets prevent falling, which often cripples elderly people. San Francisco may be the poster child for the age of the iPhone, but SRO hotel tenants still rely on old-fashion land lines—and for that they need working phone jacks. Thanks to advocacy efforts from a slew of non-profit advocacy groups and tenants, the Board of Supervisors agreed in February to amend the San Francisco Housing code to require that SRO hotel operators provide phone jacks and grab bars. Mayor Ed Lee signed the legislation in March 2013.

– Non-profit housing advocates presented the survey of seniors and adults living with disabilities in SRO survey and recommendations to the San Francisco Board of Supervisors, providing invaluable information about the changing needs of this aging population. The SRO hotel population is ‘aging in place,’ meaning that the residents are increasingly elderly and in need of higher levels of care. This survey will help the city keep pace with their increasing needs.

– Fighting the good fight in the Tenderloin: the CCSROC, in conjunction with the Department of Building Inspection successfully abated habitability issues at the Warfield and Bristol Hotels. This combined effort led to tenant settlements against the property owner this fall.

– Bring on the big quake: Tenderloin SRO hotel resident Stephen Tennis conducted over 20 disaster Preparedness Workshops in the Tenderloin and South of Market area for tenants in SRO Hotels.

Never fear, 2014, SRO tenants and advocates still have plenty of tricks up their sleeves. The fight continues to make sure SRO tenants have mailboxes, to make neighborhoods safer, and to ensure the right to affordable phone service. Think low-income residents of San Francisco don’t care? Think again.