“Spottiswoode and His Enemies” Coming to The Make Out Room 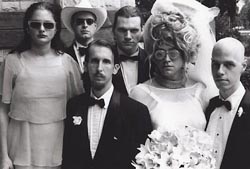 One of my favorite bands from the NY/DC area, “Spottiswoode and His Enemies”, will be performing next Thursday night, June 29th, at the Make Out Room, at 22nd and Valencia Streets. This will be a fine opportunity to see this amazing group, in what must be a rare west coast appearance, and following their shows in L.A., (and even a wedding at the Herbst!). The “Enemies”, are led by the irrepressible Jonathan Spottiswoode, a Brit who whose talent and voice, conjures images of John Prine, John Mayall, and Tom Waits, all rolled into one. With long time partner, guitarist Riley McMahon, Spottiswoode and his fantastic “enemies” are fleshed out by some of New York and D.C.’s best musicians; bassist John Young, the charming Candace De Bartolo on sax, the ever crisp drumming of Tim Vail, Tony Lauria on accordian and keyboards, and Last Train Home’s absolutely fabulous Kevin Cordt on trumpet and assorted evening wear. Spottiswoode’s music is both raw and wonderful, and no one plays the kind of blues the Enemies do. Trust me, this promises to be one of those shows you’ll be talking about for years to come.

Spottiswoode’s latest album, a duet with McMahon, called simply “S&M”, has been called an “orgiastic smorgasbord of song, with stories of love, disillusionment, Ukrainians, Parisians, New Yorkers, Londoners, Scots, Cubans, Indians, Brazilians, children, parents, gypsies, and other more interesting stuff”, a “rich and seamless journey through women, continents and past lives”, and I couldn’t have put it any better myself. Spottiswoode and McMahon’s chemistry is undeniable here, and their partnership must be considered one of the truly great ones to come along in some time. A few of the “Enemies” also appear on the CD, along with an assortment of instruments like tablas, violins, and of course, a toy piano.

My favorite Spottiswoode CD, is their critically acclaimed, second recording, “Building A Road”, and is a must album for all Spottiswoode fans. Recently re-issued, their song “Drunk”, which opens the album is just awesome, and the ass-kicking, “I Get Blue” still plays regularly in my iTunes playlist. Recorded in 2002 with pianist Kenny White on the Kumpelstiltskin label, this gospel homage is one of Spottiswoode’s best efforts.

Spottiswoode’s earlier solo CD, “Ugly Love”, was called by the New Yorker, “Genius… astringently morose ballads about love”, and the Enemies self-titled first album, “Spottiswoode and his Enemies”, was described as, “Nigh on impossible to categorize. They’re brilliantly unreviewable, thick, disturbed and hanuted. This CD ranges from dark existentialist chaos to focused almost-pretty balladry without betraying its singularly smart, tormented vision. Music to champion”, by Performing Songwriter Magazine, and a “turn-of-the-millennium White Album”.

Spottiswoode and his Enemies are truly a one of a kind band, a band that also embodies Henry Kaiser’s wonderful axiom, of performing with “people that you like, love and trust”. I can’t think of another band that combines the essence of the blues with fantastic music, humor and wit, as well as Spottiswoode and his Enemies. Keep your friends close, keep your “Enemies” closer, and dont’ miss this!

E. “Doc” Smith is a musician and recording engineer who has worked with the likes of Brian Eno, Madonna, Warren Zevon, Mickey Hart, John Mayall, Jimmy Cliff, and Spottiswoode contemporaries like Eric Brace, the Grandsons, Peter Fox, Neeta Ragoowansi and the Oxymorons. He is also the inventor of the musical instrument, the Drummstick. He can be reached at edocsmith@comcast.net