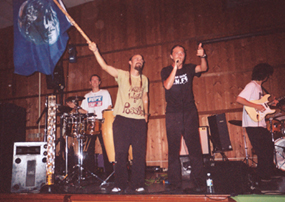 “Sol Horizon rocks!”, proclaimed Craig Litwin, Sebastopol City Supervisor, and former Mayor. “I love this band, and my younger brother!” His brother is of course, Michael Litwin, the lead singer of Sebastopol’s homegrown Sol Horizon. At a recent benefit with activist and organizer Erik Ohlsen to raise money for “Reclaiming the Commons”, and other organizations protesting against the Biotech conference, here in San Francisco this week, Litwin and his popular group performed in Sebastopol with their now trademark “roots-rock” reggae. Sol Horizon is comprised of a 7 piece combo, ably driven by lead guitarist Clayton Hunt, and percussionist Peter van Gorder, and rounded out with bassist Frank Preuss, drummer Colin Menzies, rhythm guitarist Alexei Brown and keyboardist Jeremy Cooper.

Remarkably, this group’s music is entirely original, and they have resisted taking the easy route of playing classic reggae covers, a road traveled by so many other roots/rock/reggae groups. Performing the music of say, Bob Marley, Peter Tosh, Steel Pulse, or Jimmy Cliff, one might imagine, would be very tempting. Even more amazing, is that their music truly stands on it’s own merits!

Litwin’s voice is surprisingly good, and his reggae-flavored approach is honest and energetic. Jumping around the stage, and passionately inciting the audience to dance, (which they did!), was both natural and infectious, and his humility was refreshing to say the least. The maturity exhibited by guitarist Hunt was also quite impressive considering his young age. Hunt deftly moved in and out of their material, mixing classic rock soloing with a measured ease. His forays with fellow guitarist Brown, and the textures of his compatriot, keyboardist Cooper were also quite solid.

The rest of the group, were aided by the rhythmic beats of the workman-like drumming of Menzies, the funky grooves of bassist Preuss, and rounded out by the prestidigitations of percussionist, Peter van Gorder. Like one of my favorite percussionists, David van Tiegham, van Gorder was very enjoyable to watch. His continuous smile, and his skill on a variety of wood blocks, congas, talking drums, cymbals and electronics, gave Sol Horizon a truly cosmic, yet primal groove. The audience, as well as myself, particularly enjoyed watching the way van Gorder’s hands moved around his congas, gesturing with one palm forward, and then alternating that motion with both hands.

At one point during the show, Sol Horizon was joined on stage by Ohlsen, and the activist next turned hip-hop poet, as he exhorted the crowd to “Compost the Empire!” Litwin then accompanied van Gorder on percussion, and Hunt took the opportunity to indulge the crowd in some old-fashioned shredding. Litwin reclaimed center stage, and implored the crowd to help the causes that brought them all there tonight, and thanked them profusely. They earnestly responded, with even of more of their number joining in dancing, carrying signage to the stage, singing along, and just plain groovin’!