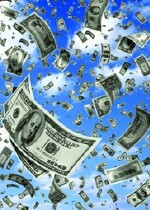 Tomorrow at 5:00 p.m., progressive activists will picket the San Francisco office of Thomas Coates – the Southern California landlord who gave $1 million to repealing rent control in 2008. Coates has now dumped $200,000 on behalf of four moderate candidates for the Board of Supervisors. The dollar amount of Coates’ donations are obscene, but it speaks to a larger problem. “Soft-money,” third-party expenditures have overwhelmed the Battle for City Hall – making the $500 cap on direct campaign contributions a joke. In this cycle, committees set up for the purpose of electing candidates (on both sides of the spectrum) are run independently – so that donors who “maxed out” on a candidate can still give unlimited sums. And because they are third-party committees, there’s no way to hold the candidates themselves accountable.

But these were not direct contributions to the candidates themselves – after all, campaign finance law makes it illegal to give a candidate more than $500. Instead, they were given to third-party committees set up to help these campaigns – where there are no limits.

October 15th was the latest deadline for Supervisor candidates to file their reports with the Ethics Commission. In the past, reporters and bloggers could scan through these papers and find interesting donors who contributed to campaigns – and some checks would even become a story. And because they were direct contributions, candidates could fall under scrutiny for accepting the “wrong” donation – and with enough pressure would give the money back.

But now, campaigns are effectively being run by these third-party expenditures with no donation limit – leaving the official candidate reports with little to say or reveal.

In District 6, Theresa Sparks only raised $9,000 in the last two-week filing period. But don’t worry: the Realtors chipped in $20,000 during that time for Sparks, and the Alliance for Jobs and Sustainable Growth dumped $46,000 (in mega-checks from Plan C, SEIU-UHW and the Golden Gate Restaurant Association), beyond the $60,000 that they gave before. The group has reported spending over $50,000 on paid phone-bankers for Theresa Sparks. After the filing deadline, Coates single-handedly gave another $45,000 to help Sparks.

Sparks’ rival Debra Walker only reported raising $5,000 in the last filing period. But a committee called “Friends Supporting Debra Walker for Supervisor 2010 sponsored by labor organizations” raised over $47,000 during the same time – and spent over $10,000 on paid canvassers. Door-hangers that District 6 voters received on behalf of Walker were from this committee – with virtually all the money coming from the Labor Council.

Of course, my favored candidate for District 6 – Jane Kim – has also been helped by a campaign committee called “New Day in San Francisco.” But as the Bay Citizen has reported, this committee has raised far less than the groups helping her challengers. Ethics Commission reports show that “New Day SF” raised about $12,500 during this two-week filing period – roughly equivalent to what Jane Kim raised herself.

The story is very similar in District 8. At a recent candidate’s debate, Scott Wiener said he had “no paid phone-bankers” on his campaign. While that may be technically true, the Alliance for Jobs and Sustainable Growth’s independent expenditure report showed that it spent money on phone-bankers for District 8. The group has raised over $100,000 for Wiener – not including late contributions from Thomas Coates and the SF Firefighters. In addition, the Realtors have spent over $28,500 on behalf of Wiener independently.

And if Wiener’s statement about “paid phone-bankers” was directed at his rival Rafael Mandelman, again we’re talking about soft money. A group called “Teachers, Nurses, Muni riders, neighbors and working families supporting Mandelman for Supervisor 2010 sponsored by labor organizations” is spending over $100,000 in District 8 – with almost all of its money coming from SEIU 1021. According to Ethics Commission reports, the group has done paid phone-banking in District 8 – but Mandelman’s campaign has not.

In other words, we have a very intense race in District 8 between the “progressive” and “moderate” factions – where each candidate can honestly say they are running a clean campaign, but unlimited donations are flowing through soft-money conduits. The third candidate, Rebecca Prozan, has stressed her independent credentials – but has also been helped by an independent expenditure. But the $5,000 she has gotten from the Realtors in a few newspaper ads is small potatoes relative to what her two main rivals are getting.

One of the most disturbing parts of these “third-party expenditures” set up on behalf of candidates is that they share some of the same donors. So while the SF Firefighters have endorsed Wiener (and can only give his campaign $500), they also gave $15,000 to the Alliance for Jobs and Sustainable Growth’s campaign committee to elect Scott Wiener.

In District 2, Pacific Heights socialite Dede Wilsey has given $500 to Mark Farrell. But she also gave $50,000 to a third-party committee called Common Sense Voters – which was set up exclusively to help elect Mark Farrell. So far, their expense has been a ridiculous website that links District 2 candidate Janet Reilly to progressive bogeyman Chris Daly. Who else gave money to this campaign committee? Thomas Coates, who plunked down $100,000.