SMV Comes to the Regency 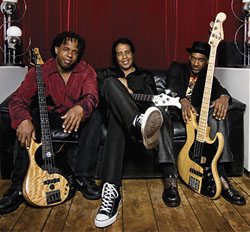 In an era where sports fantasy leagues are all the rage comes a real-life historic teaming that serious music fans and bass players have long dreamed of. Last Tuesday night at the Regency on Van Ness, saw the incredible bass trio “SMV”, featuring musical titans Stanley Clarke, Marcus Miller and Victor Wooten. This unique alliance of three generations of bass gods has been on chat room and fan gathering wish lists for over 15 years, kept alive by periodic statements from all three that schedules permitting they would give it a go. Finally, in October 2007, with Clarke set to receive a Lifetime Achievement Award from Bass Player magazine, at its annual Bass Player Live! event in New York City, Miller and Wooten made the time to attend and induct their mentor. The ensuing VSOP jam not only blew the minds of the 900 in attendance, it cemented for the trio their inherent musical chemistry and thus the viability of pursuing the project in earnest. As a result, in January 2008, SMV entered the studio to record a CD and put together a summer/fall tour.

The three recall their first performance and the sessions for their disc. Says Clarke, “The second we started ‘School Days’ at the Bass Player event I knew it was historical for us and the audience. Marcus and Victor are so intuitive, and we each found our range. Marcus was slamming down the groove and Victor started playing these harmonics chords, and I was like, man, this is so bad-ass! When you have that amount of knowledge, respect and love it always creates clarity in the music.” Wooten admits, “To work with Stanley and Marcus has been a dream come true for me. We’ve each brought in tunes for the CD that allow plenty of space and interpretation from the other guys. It’s been pretty funny, with Marcus and I imitating each other and doing our Stanley licks. Best of all, the project is very musical; the bass heroics are there, but people are going to be surprised at how musical it is.” Adds Miller, “That was important; we didn’t want to just have everyone bangin’ away at the bass. In fact, we’ve had to encourage each other to play with more technique at times. The most interesting aspect has been hearing the distinct sound of our basses—which people all know from our albums—side by side. For me, it’s like listening to the history and evolution of the instrument; it’s really amazing.” Clarke sums up, “Considering we’re three guys playing the same instrument, it’s going to be a real revelation for folks. You’ll hear the electric bass in particular with some whole other possibilities. It’s a great new day for the bass.”

To their credit, all three members of SMV are equally adept at innovation and collaboration. Stanley Clarke is nothing short of a living legend, having liberated the bass the way Louis Armstrong and Charlie Parker had liberated their instruments before him. Born in the bass-rich burg of Philadelphia, Clarke headed to New York City right out of college, as a classically-trained acoustic bass virtuoso. There, he quickly made his mark on the jazz scene gigging with Stan Getz, Joe Henderson and Horace Silver, before joining Getz pianist Chick Corea to form the seminal, Grammy®-winning fusion outfit, Return To Forever, in 1972. As the band took more of an electric focus (with Al DiMeola and Lenny White), Clarke not only split his time between upright and electric bass guitar, he launched the high-end boutique bass guitar market via his use of custom-made Alembic basses.

Having touched on performing his own music and bandleading as a teen, and taking issue with the bass being viewed as more of a support than a solo instrument, Clarke released a string of solo albums, starting with Children of Forever, in 1973. Three years later came the watermark bass disc, “School Days,” with its title track serving as the first bonafide “bass anthem.” Clarke also extended the range of the electric bass upward, inventing the piccolo and tenor basses in an effort to speak in the range of his musical hero, John Coltrane.

With his solo career in place, Clarke moved on to more acclaimed pairings, including the Clarke/Duke project (with keyboardist George Duke), the New Barbarians (with Keith Richards and Ron Wood), appearances on two Paul McCartney albums (including co-writing “Hey, Hey” with McCartney), Animal Logic (with Police drummer Stewart Copeland) and Rite of Strings (with Jean-Luc Ponty and Al DiMeola). The late-’80s brought new opportunites, as Clarke was hired to score the TV series Pee Wee’s Playhouse. This led to his first movie score, Boyz ’N’ the Hood, and what has become his second career as an acclaimed film composer. Additional notable soundtracks include Passenger 57, What’s Love Got to Do with it, Poetic Justice, The Transporter and the Showtime series, Soul Food.

Having stated repeatedly that the bass is a permanent, internal part of him, Stanley Clarke continues to live up to his moniker, the Lord of the Low Frequencies. Of late, he has been on the road with the Clarke/Duke Band, Rite of Strings, McCoy Tyner, and his own group; and he has the highly-anticpated Return To Forever reunion tour launching in June. Recently-signed to Heads Up International, Clarke has released the DVD, Night School, a star-studded tribute concert touching on all aspects of his extraordinary career, and Toys of Men, his commercially and critically-acclaimed war-conscious CD.

Striking a chord with music fans and music critics has been a consistent thread through Marcus Miller’s Grammy®-winning career. Born in Brooklyn, New York, Miller was raised among jazz royalty (his second cousin is Miles Davis-pianist Wynton Kelly) in nearby Jamaica, Queens. Inspired by his father, church organist William Miller, Miller played piano, organ, clarinet and sax, before gravitating to bass guitar by age 13, in order to get into local bands. He made his pro debut at 16, with flautist Bobbi Humphrey, and then hit the road with drummer Lenny White. Upon returning, Miller planted key seeds: In addition to cracking New York’s lucrative jingle and session scene, he joined the bands of Saturday Night Live and Roberta Flack, where he met David Sanborn and Luther Vandross. Both men quickly tapped Miller’s writing, producing, and multi-instrumental gifts for a steady string of hit records and tours. Soon after, Miles Davis came calling, leading to six albums, three of which Miller produced, most notably the landmark Miller-written and produced Tutu.

Firmly established as a producer, Miller guided recordings by Vandross (including the 1991 Grammy® winning R&B Song of the Year, “Power of Love/Love Power”), Flack, Aretha Franklin, Chaka Khan, Wayne Shorter and Al Jarreau, while contributing killer bass lines (his peers nicknamed him the Thumbslinger) to discs by Donald Fagen, the Brecker Brothers, Grover Washington, Jr., Paul Simon, Don Grolnick, Was (Not Was) and countless others. He also formed the Jamaica Boys (with Lenny White and Mark Stevens) and broke into film composing with scores for Siesta, House Party and Boomerang.

Finally, in 1992, Miller turned his focus to his solo career with the release of The Sun Don’t Lie. Featuring his most unmistakable musical voice—his ’76 Fender Jazz Bass—Miller accepted the torch passed on by Stanley Clarke and Jaco Pastorius and reignited the spark for solo bass albums, setting a new standard in the process. Miller’s seven subsequent solo efforts include the Grammy®-winning M2, in 2001 (making him the only solo bassist to have ever won a Grammy for Best Contemporary Jazz Album), plus the biographical DVD, Master of All Trades. Creatively, Marcus Miller continues to keep multiple irons in the fire, scoring films and the Chris Rock TV show, Everybody Hates Chris, hosting the North Sea and Playboy Jazz Cruises—all while keeping up a rigorous touring pace for his latest CD, Marcus.

Like Marcus, “Victor” is the lone name needed among bass fans to identify the last great hero of the instrument, Victor Wooten. And also like Miller, Wooten’s musical reach goes far beyond the four-string. Born in Idaho to a military family, and raised on the island of Oahu and on the West Coast, Wooten received bass lessons at age 3 from his brother Regi. By the time he was 5, he had made his stage debut with his four older brothers. As The Wootens, they spent the ’70s opening for high-profile acts like Curtis Mayfield and War, before the family settled in Newport News, Virginia in the early ’80s. There, the brothers landed steady gigs at Busch Gardens theme park, in Williamsburg, and began to meet musicians from Nashville and New York.

Additionally, Wooten took major steps forward in the field of education, offering music and life lessons though his popular Bass Nature Camps in his home base of Tennessee, and his enlightening novel, The Music Lesson. Presently, Wooten is maintaining his dual solo/sideman pace, regularly hitting the road and studio with the Flecktones (who have released a dozen albums), Mike Stern and Chick Corea’s Elektric Band. With each of his six solo CDs, Victor Wooten has expanded his musical focus and knack for genre-uniting, via his songwriting, producing and multi-instrumental skills—all while retaining his beacon bass playing. This has never been more evident than on his brand new release, Palmystery.

All things considered, SMV appears destined for greatness from the ground up. Perhaps the prospects for the band are best summed up by American Idol’s Randy Jackson, a top bassist himself and a friend to all three: “You’re talking about the three giants of their generations. I can’t wait to hear what those guys come up with!” So keep and eye and an ear out again for SMV, sure to pack this summer and fall’s most powerful one-two-three punch!