Smell Of The Kill Is Not ‘Kill Bill’ 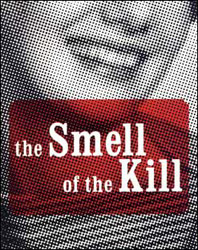 “Kill Bill 2” has subtle nuances throughout its wonderful story line. No need to shout at each other – sometimes just a look is enough to put your point across. Of course Kill Bill 2 is a film – and a gorgeous one at that. On the stage, sometimes just a look is not good enough – especially for those in the back row. So stage actors have to talk a little louder and they have to make wide gestures to make sure that everyone sees what they are up to.

Ok. But in “The Smell of the Kill” the frenzy of raised voices never ceases. It’s a shouting match between three women arguing over whether they should close the door on their husbands who have wandered into a newly installed meat freezer in the house. Now, if you were plotting to freeze your husband wouldn’t you keep it a little quieter? Keep in mind that this is a comedy. However, they really do close the door and freeze the guys. Too bad – because I’m sure that the hubbies would have liked to have had the chance to freeze these nagging hags that talk non-stop.

“Smell” has a few good funny moments – but hardly was it a knockdown roll in the aisles hilarious. Missing were the nuances referred earlier. There was no need for the constant shrill screeching. Not only was it wearing on nerves, but was not effective. The actors Stacy Ross, Zehra Berman and Susi Damilano play the three women. They all are accomplished actors, so perhaps it was the director who got them all hyped up. Whatever the reason – “The Smell of the Kill” at the Playhouse on Sutter did not work for me. The really good news out of all this is that the SF Playhouse is in a spectacular building on Sutter near Powell. The outside looks like the Curran Theater – with it’s massive pillars. I am looking forward to more productions there. This production, though not for me showed me that the company has good legs. Buzzin wishes them good luck. Or as they say in showbiz “Break-a-leg”. RATING OF THE PLAY: TWO GLASSES OF CHAMPAGNE. Rating of the Theater – Four Glasses of Champagne!!!!

STAR JONES tells a gossip weekly how she feels about HOWARD STERN: “I WOULDN’T CARE IF VULTURES EAT HIM ALIVE.”. Celebs say: “Maybe she tried to get a date with him and he wasn’t interested”. Oh, those celebs! Then on the other hand he does like them thin and sexy.

Matthew Perry wants it known: “Most of the girls I was linked to, I never met.” Celebs comment: “Lucky you Matt.” We’ve seen some of them.”

The producer of the Oscar telecast, Joe Roth is reportedly trying to convince Ellen DeGeneres to host next year’s show. Celebs ask: ” How will that work? Will those old scrooges in the audience take to her humor? ”

Locally, Celebs are saying that the new Apple store across from Virgin Records looks like a mausoleum to house old Apple computers. Another Celeb commented: “They tore down a perfectly good looking building with lots of windows to put up that ugly windowless piece of crap? Where is our crack planning commission?” What crack planning commission? What City is he talking about? Maybe they’re planning more Crack houses.

T’S HERSELF – is a new tell-all book about Maureen O’Hara. Written by O’Hara. Some of the dirt in the book: She worked with Rex Harrison and hated him. “He was rude and crude”, she said. Supposedly he and Carol Landis planned a double suicide. He backed out at the last moment. The studio destroyed the note and hushed it up. Director John Ford was an ogre and taskmaster. She walked in on him one day and saw him kissing another man (a very famous leading man who she doesn’t name). She tells about how her husband was a drunk who wasted her money and made her miserable for years. “I found out later he was seeing men” – she sez in the book. That’s just for starters. The star of “The Hunchback of Notre Dame” even manages to hit Disney Studios and Roy.

Reportedly “Sweet Lips” was asked to audition for Connie and Carla. The movie has two straight women playing drag Queens. It is rumored that Sweet Lips replied to the offer – “Why would I want to play a Drag Queen. I’m already one!”

EMAIL THIS COLUMN TO A FRIEND STARVING FOR LOVE AND KINDNESS.