Small Company Has a Big Heart 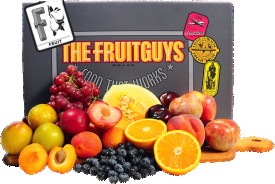 So many of the recent stories about the American food system are depressing, from the elected officials who think schools shouldn’t offer free lunches to needy kids, to the Big Food companies laying off thousands of workers to plow more money into advertising junk food. That’s why this article about The Fruit Guys and their founder, Chris Mittelstaedt is so refreshing – it’s a story about a Small Food company, one with a conscience, headed by a guy who isn’t afraid to step up and help those in need, even when it isn’t necessarily the wisest decision from a strictly business point of view. Junk food companies love to describe their offerings as “better for you“, when in reality their baked chips and diet sodas are “better for you” only in the sense that it is “better for you” to be hit in the head with a brick twice rather than three times. Doing business with The Fruit Guys, whose sole products are fresh seasonal produce, really is “better for you.”

Simply put, The Fruit Guys deliver boxes of premium quality fresh fruit (veggies too, if you want them) to businesses, schools, and offices all around the country. Just as teachers know that better nourished kids learn better in school, employers have discovered that workers who snack on fresh fruit maintain better health, and are more productive, than those who rely on junk food from the break room vending machines.

In 2008, I was administering a grant for San Francisco’s Balboa High School. The grant, from the USDA’s Fresh Fruit and Vegetable Program (FFVP), was part of a student-led project to increase consumption of fresh produce among Balboa’s largely low income population. Designed by the students in Balboa’s Wilderness Arts and Literacy Collaborative (WALC) pathway, the plan was to use the grant money to have fresh fruit delivered to school several times a week. Student volunteers would sort the fruit and deliver it to participating classrooms by 8am, and teachers would then make the fruit available to their students all day. The students had agreed to do all of the heavy lifting, and my job was to make sure the fruit was ordered and the grant paperwork filled out.

The director of SFUSD student nutrition services helped me arrange wholesale fruit delivery through the same vendor supplying fruit to the cafeterias, and all proceeded smoothly as the 2008-09 school year began. Fruit came in, went to the participating classrooms, and was promptly devoured by the kids. The program was so popular that soon the Balboa Teen Clinic, the school’s front office, and the counseling office were all asking for fruit, too. Not wanting to burden the kids with more fruit to sort and haul around school, and hoping to source a variety of different fruit for once a week delivery to those additional school locations, I looked for a second vendor. The Fruit Guys were recommended as a good source of high quality assorted fruit appropriate for an office setting, and soon I was working with Chris. He took a real interest in the FFVP grant and said he was happy to help out.

In mid September of that year, the USDA told me we could get a lot more money because another school had backed out of the grant at the last minute; we could have their share of the grant money in addition to our own share, but there was one hitch – we had to spend the money by the end of September. I called Chris and he helped me structure the payments and write up the paperwork so that we could legally qualify for the extra money, and as a result, some additional classrooms were able to enjoy a weekly delivery from The Fruit Guys. Now we were getting regular fruit deliveries from two vendors, the one who supplied the schools, and The Fruit Guys.

Then, over Columbus Day weekend, with no advance warning, the vendor who had been supplying both the school district and our grant quietly went out of business; I had no backup plan, and never even realized I might need one. The student nutrition director, frazzled by his own need to source produce in a hurry to keep his meals compliant with USDA regulations, assured me that eventually he would hook me up with a new supplier, but that for a few weeks I was going to have to deal on my own.

In a panic, I again called Chris. His company’s business model is delivery of boxes of assorted high quality fruit to businesses and schools, but what I needed was large quantities of just one kind of fruit per day – say, 800 apples – at wholesale prices; I couldn’t afford the kind of quality that was The Fruit Guys’ hallmark for that quantity of fruit. I just needed 800 apples, tomorrow! And Thursday! And again next Tuesday! Conventional vendors need lead time before they can begin servicing a new account, lead time that I didn’t have; the terms of our grant required the fruit to be available a set number of days per week, every week. Chris knew I was stuck between a rock and a hard place, and a shrewd businessman might have offered “help” for a hefty price, but not Chris. He assured me that he would find a way to get us our apples, and that he would do it at his cost, for as long as we needed to get set up with a new permanent supplier.

He was as good as his word. The next day, we got our apples, and we continued to get shipments of up to 1,000 pieces of fruit at a time, courtesy of Chris’ delivery truck, for a full month. I doubt that what he charged us even covered his expenses, but Chris was adamant that the kids shouldn’t go without their fruit just because another company screwed up and left us in the lurch. Know any Big Food companies that step up that way?

And that’s not the end of The Fruit Guys’ community work. Helping to feed the hungry is important to the company; in 2011 they donated over 100,000 lbs of produce to St. Anthony’s Dining Room in SF — and a total of 300,000 lbs if you include all of their other local hubs nationwide. The Fruit Guys also help support small farmers through their Farm Steward program. They’ve provided prepayments in the form of no-interest loans to farmers who needed help with capital, helped with farm plantings, and even installed owl boxes for farmers to provide natural pest control and protect their fruit trees from damage by rodents.

The USDA Fresh Fruit and Vegetable Program has been restructured and that high schools are no longer eligible, so Balboa’s grant ended in 2010, but The Fruit Guys continue to deliver fruit to other FFVP schools around the country. They also provide, at no additional charge, ongoing education to kids about healthy eating and physical activity, and help organize the FFVP paperwork, which eases that burden on the schools (using the model we developed together during the first year of the Balboa FFVP grant.)

The Fruit Guys do home deliveries too, so next time you need a gift for someone, think about a box of fresh seasonal local produce delivered right to their door. Supporting a business that supports its own community just feels like the right thing to do, and unlike the promises of Big Food, it really is “better for you.”