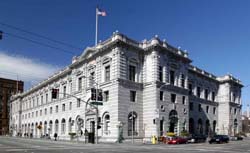 Attorneys filed suit yesterday on behalf of more than 20 tenants of buildings owned by Skyline Realty, suing the company for consistently employing shocking, thug-like tactics to empty their units of long-term tenants. The lawsuit alleges these tactics constitute unfair business practices, and seeks both compensation for the affected tenants and a court injunction putting an end to their illegal efforts. The suit represents the latest in a series of attacks on Skyline Realty – also known as CitiApartments – and with a picket scheduled for this Saturday at noon at Skyline headquarters, it doesn’t look like the deluge will be ending anytime soon.

Attorneys said yesterday they’re filing the suit after hearing the same stories year after year from tenants who were victims of Skyline abuse. Most begin the same way: tenants were living in a quiet, peaceful building until Skyline moved in.

The suit alleges that soon after taking ownership of a building, Skyline begins employing a variety of tactics to get as many long-term tenants out as possible. They employ such tactics so they can then charge higher rents for the newly vacant units. Their tactics include:

• Changing locks and not providing tenants with new keys

• Interfering with caregivers who provide assistance to senior and disabled tenants

Alan Kaufman, one of the plaintiffs in the lawsuit, said he witnessed many of
these tactics first-hand after Skyline purchased his building.

“The whole place changed after they took over,” said Kaufman, who lives at 1126 Bush Street. “We had no problems at all, then suddenly we had these thugs – big guys in suits – lumbering around our halls, intimidating people. One of them showed up to my neighbors place in a combat outfit with a gun.”

The effect of these tactics, said Kaufman, was immediate.

“People left the building in droves,” he said.

Karen Hull, one of the attorneys filing the suit, said that the most disturbing aspect of these tactics is how they are often targeted at senior and disabled long-term tenants who can least afford to move out from their homes.

“They pick the most vulnerable, low-income people,” said Hull, who is representing Lisa Cleis, the sole caregiver of her disabled mother and another tenant harassed by Skyline. “Then they zero in on their worst fear, which someone of authority who wants to kick them out.”

Attorneys in the case hope the suit will prove to the court that these types of practices are not used during isolated events, but are systematic efforts by Skyline that ultimately constitute their usual business practices.

“For more than 20 years, my office has seen this pattern repeat itself over and over,” said tenant attorney J. Scott Weaver. “With this suit, we know we’ll have some impact. The question will be how much.”

The legal battle represents just one way Skyline will be impacted. This Saturday at noon, at the corner of Market and Church, tenants and housing activists will stage a picket of Skyline headquarters and ask the company to sign an agreement to stop their illegal practices.

For more information about the campaign, go to www.citistop.org.