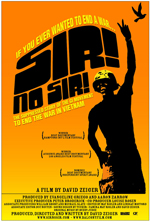 SIR! NO SIR! is the best movie about the Vietnam War I have ever seen, and I’ve seen most of them. It tells the courageous story of mass resistance to the war by active-duty GIs. This is a story that the corporate media, the entertainment industry, and establishment historians have worked overtime to bury. You need to know this story.

SIR! NO SIR! is playing Tuesday, Wednesday and Thursday night (April 11-13) at the Red Vic, and at the Grand Lake Theatre in Oakland. It is an independent production, not yet set for general release. Run, don’t walk, to the theatre. But this is not a movie review.

The war in Vietnam wasn’t a movie. It was a time when hundreds of thousands of armed american men and women participated in grassroots, rank-and-file political struggle in a way that hasn’t been seen since.

SIR! NO SIR! allows us to hear from Howard Levy, a military doctor who, early in the war, refused to train Special Forces troops, was court-martialed, and sent to prison. We hear from members of the Presidio 27, prisoners on the Presidio Army Base here in San Francisco in 1968, who — after a prisoner was brutally murdered by the guards — tore apart their stockade and staged a sit-in on the post lawn. They were then charged with mutiny, a capital offense. Unlike today’s media-staged sit-ins, they weren’t expecting to be cited and released.

SIR! NO SIR! also allows us to hear from members of the Fort Hood 43, black soldiers in Texas who were prosecuted for refusing riot-duty at the 1968 Democratic Convention in Chicago. The rest of their unit was sent to Chicago, but kept in their barracks because the brass wasn’t sure which side they would take if put on the streets.

SIR! NO SIR! goes on to tell the stories of an ever-growing rebellion, of thousands of GIs who refused to fight, of hundreds of thousands who went AWOL. We hear the story of the weeks-long revolt by GI prisoners in Long Binh Jail (LBJ) in Vietnam. And we hear the story of Billy Dean Smith, who was framed for fragging his commander. For those who don’t know, fragging was the not-uncommon practice of tossing a fragmentation grenade in the direction of gung-ho officers, often with deadly results. Billy Dean Smith was made a scapegoat for hundreds of successful fraggings. He was acquitted at trial, but, as with many Vietnam-era anti-war veterans, suffered ongoing indignities and repression from the powers-that-still-be, and is even now locked away in one of america’s dungeons.

In the end, SIR! NO SIR! cites the analysis of military officials that the US army in Vietnam was no longer capable of fighting the war. That is what brought the war to an end, more than anything else — except, of course, for the resistance of the Vietnamese people themselves. The millions who marched and fought in the streets of amerika to end the war played their part, but the anti-war GIs were quite literally on the front lines. While there were many committed political organizers involved in the GI movement, both inside and outside the military, it was the soldiers themselves who provided the leadership and, no pun intended, the troops.

The brave soldiers who resisted the war were part of a real movement that grew directly from the ranks of poor and working people from every part of this nation, most particularly people of color. The movement didn’t draw its momentum or inspiration from some set of armchair theorists, or from some cabal of non-profit funders. The movement grew directly from the needs of the GIs — the need, first and foremost, to survive; but also the need to live with some kind of human dignity, to feel that they were not the flunkies and cannon-fodder for a sick set of war-mongers and imperialist scumbags.

Near the end of SIR! NO SIR! there are scenes of a mass of GIs throwing their medals in disgust onto the white house lawn. Thankfully, we are spared any sight of John Kerry faking it. We do see and hear one soldier make the famous statement that “I don’t want to fight anymore. But if we have to fight, it will be to take these steps.”

In the years since the victory of the Vietnamese people in 1975, the political leaders of this country have sent our young men and women off to war many times. And every time, the corporate media is eager to claim that the “Vietnam syndrome” — the unwillingness of the US working class to fight, kill or die in unjust wars — has been put to rest. But the fact remains that, even to this day, three years into the war in Iraq, our ruling class betters are afraid to re-institute the draft and up the ante in a way that would risk the military collapse they suffered in Vietnam.

In that way, the legacy of the GI resistance movement lives on. SIR! NO SIR!

Marc Norton is a bellman at a small hotel in downtown San Francisco. He was drafted in 1970, but did not serve. Marc Norton can be reached at nortonsf@ix.netcom.com, and through his website at http://www.MarcNorton.us