Should the SF Chronicle Be Proud of its Award? 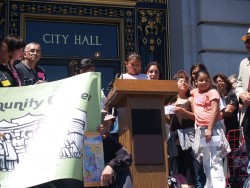 On Sunday, the San Francisco Chronicle reported its crime writer, Jaxon Van Derbeken, had received a journalism award for “Excellence in the Coverage of Immigration.” The presenting organization was the innocuously titled Center for Immigration Studies (CIS). From the blandly favorable news story, you wouldn’t have known CIS is strongly anti-immigrant.

The Chronicle described CIS as an “independent research group that studies the effects of immigration.” But the Southern Poverty Law Center (SPLC), a prominent civil rights group, describes them differently – as “the nativist lobby’s supposedly ‘independent’ think tank,” and says CIS “has never found any aspect of immigration it likes.” SPLC explains, “CIS was started in 1985 by a Michigan ophthalmologist named John Tanton — a man known for his racist statements about Latinos, his decades-long flirtation with white nationalists and Holocaust deniers, and his publication of ugly racist materials.”

In 2004 a Wall Street Journal editorial reported, “CIS, FAIR, NumbersUSA, Project-USA — and more than a half-dozen similar groups that Republicans have become disturbingly comfy with — were founded or funded (or both) by John Tanton.” It said Tanton’s goals include trying to “stop immigration to the U.S.” and supporting “sterilizing Third World women.”

Due to political pressure that Van Derbeken’s stories helped generate, Mayor Gavin Newsom hastily issued a new policy that puts innocent children in danger and undermines the fundamental right to due process. Under the Mayor’s new policy, implemented in July 2008, immigrant youth who are merely accused of crimes are now being reported to federal immigration officials for deportation before they even get their day in court. Under this new policy, 130 youth, thus far, have been reported to immigration enforcement and sent to federal detention centers as far away as Indiana and Washington; many of these youth have been torn away from their families in San Francisco.

The San Francisco Interfaith Coalition on Immigration (SFICI), a group of primarily Christian and Jewish clergy and lay people committed to preserving the dignity of immigrants, told us, “Biased reporting that has helped to significantly compromise the city’s sanctuary policy is not something to celebrate.”

It would be easy to guess charitably that the Chronicle was duped into accepting an award from a group it would shun if it knew the truth. That guess is proven wrong by video and a transcript of the awards ceremony that CIS has posted on its own Web site. Van Derbeken and Chronicle columnist Debra Saunders both gave openly partisan speeches.

Rather than congratulate themselves on receiving such an award, Van Derbeken and his editors should be asking themselves if the praise from CIS shows they went too far in slanting those anti-sanctuary stories against immigrants.

As yet, the Chronicle hasn’t mentioned any of this in print. Instead, its story about the CIS award is weirdly similar to a 2007 report of awards from the far less partisan and more distinguished Society of Professional Journalists.

The paper should have tipped off readers that CIS is not a neutral think tank, but a strongly partisan organization that has been criticized as racist and vehemently anti-immigrant.