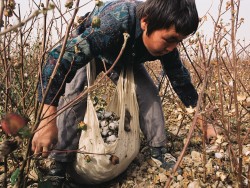 THE THING THAT HAPPENED: This year’s United Nation Association Film Festival (UNAFF) opened with this powerful short film. Andrew Walton’s documentary begins with a man seeking a way to process the massacre of hundreds of neighbors, relatives, and friends by the child soldiers of the notorious Ugandan insurgents the Lord’s Resistance Army. Rather than descending into anger and hatred, he and other men found Hope North Vocational and Secondary School. Walton’s film gives the viewer a very visual tour around this 150-pupil institution.

One admires the dedicated teachers amicably overcoming a lack of computers and sufficient numbers of textbooks to transform the lives of former Lord’s Resistance Army child soldiers and children orphaned by poverty, AIDS, or genocide. But it’s seeing Hope North’s pupils being given something bigger than day-to-day survival that will encourage viewers to have a Harvey Milk flashback.

CARAVAN OF THE BOOKS, KENYA’S MOBILE CAMEL LIBRARY: What do you call a bookmobile that operates in 100-plus degree heat and chomps on thorny leaves for fuel? In Kenya, the answer would be Gellow, the name of one of several camels which transports over 300 pounds of donated library books to Kenya’s rural schools.

Herbert Ostwald’s cute childrens documentary follows Gellow and librarian Abdullah Saleh as they make a typical four-day caravan into the desert to bring the printed word to parts of Kenya where books are a rarity. The documentary also tracks a childrens book artist sketching out illustrations for a book about the camel library as well as a pair of illiterate nomadic girls introduced to literacy. But what may tempt viewers to find the nearest petting zoo with camels will be the film’s frequent footage of Gellow in action.

Aside from the two problems listed above, there are also such horrific consequences as the destruction of the Aral Sea, unprotected exposure to pesticides, and ruthless state repression deployed against dissidents as well as anyone unlucky enough to be caught in the crossfire. Why Uzbekistan’s situation matters to Western viewers is that the country is the world’s second largest exporter of cotton. By film’s end, it may be impossible to look at an image of an Uzbek child cotton-picker without wondering if you’re contributing to her exploitation.

THE POWER OF ART/WOMEN’S VOICES IN AFRICA: How does one balance artistic individualism with community harmony? Claudine Pommier’s continent-hopping survey of contemporary African women artists sadly doesn’t provide an answer or even living examples. Instead, it opts for broadly exposing the viewer to a variety of women working in artistic media ranging from traditional house decorations to graffiti art. Yet this generally unmediated survey fails to provide anything other than trite insights into sexist and cultural barriers to African women artists.

MISTURA, THE POWER OF FOOD: Cook/host Gaston Acurio characterizes Peru as a country of people who like to eat. So perhaps having Mistura, the country’s annual food festival, is inevitable. But what Julia Patricia Perez’s film shows is that beneath its Mardi Gras-like atmosphere, this egalitarian festival provides a way of reaffirming national pride by showcasing the best of the country’s regional cuisines. Perez’s cinematic tour of the 2010 Mistura introduces the viewer to such colorful characters as a Cuzco farmer who grows 185 varieties of potato and the intuitive showman cook Javier Wong.

Despite the film’s lack of insight, seeing the many Peruvian delectables on display may persuade viewers of Acurio’s idea of cuisine appreciation as an instrument of world peace.

LA ISLA, THE ARCHIVES OF A TRAGEDY: Guatemala in the 20th century was a deadly place if the army and/or national police believed you were a subversive. Unpunished murders and torture cases unfortunately felt like standard procedure. But the accidental 2005 discovery of the Guatemalan army and police’s subversives file archives may be a game-changer. Uli Stelzner’s quietly horrifying documentary chronicles both investigators’ efforts to preserve information dating back to the 1930s, and political survivors’ efforts to achieve a sense of closure.

Vintage period footage projected on building surfaces provides a sense of hidden history permeating Guatemala. But between readings of chilling advisor memos sent to the CIA and footage of the current Guatemalan Army on exercises, one wonders just how much justice will be achieved in a land where the right wing still holds much power.

WIKIREBELS: Demonized in the US as the worst kind of traitors despite lacking American citizenship, whistleblowing hacker group WikiLeaks receive a more sympathetic media treatment in Bosse Lindquist and Jesper Juor’s UNAFF closing night documentary. The film traces the history of the group from WikiLeaks editor-in-chief Julian Assange’s impressive days as the hacker Mendax through releasing the Guantanamo Bay Interrogation Manual to the controversial dumping of American diplomatic cables.

In addition, there are interviews with Assange himself, WikiLeaks players such as Daniel Domscheit-Berg, and investigative journalist Iain Overton. While Lindquist and Juor avoid passing judgment on Assange and his major personal shortcomings and problems, it’s hard to argue with the filmmakers’ argument that WikiLeaks’ exploits has altered both citizens and powerful institutions’ relationship to information secrecy.