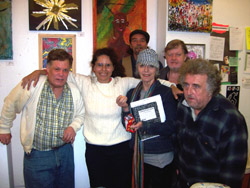 My name is Scott Stevens, and I am an SRO tenant at the Star Hotel in the Mission District. Recently, I enrolled in a writer’s workshop called “’Sho you write” – taught by a wonderful teacher named Flo Mayberry. Ms. Mayberry is a Master’s student in Creative Writing at New College of California. She is also the mother of Central City SRO Collaborative tenant organizer Tony Robles.

The class couldn’t be more diverse if it were sponsored by the UN. We have an interesting assortment of prose and poetry writers from every corner of the country as well as every race and ethnicity. The atmosphere is relaxed and everyone gets to share his or her insights and past experiences.

“The class is truly representative of the SRO Community,” says Robles, who is an accomplished poet and children’s book author. “It is wonderful to be able to tap into one’s creativity, to channel it in a positive way.”

‘Sho you Write’s instructor, Florence Mayberry, is a native San Franciscan who will receive her Masters of fine arts degree from New College of California in late April. “It’s never too late” Mayberry says. “Society tells you that you have to finish your education in your 20’s, but I was tenacious and am getting my degree at the age of 59. For me it’s vital to share this message with other people of my generation.”

One participant, Ye Ye, is a tenant at the Dalt Hotel on Turk Street and was so inspired by Ms. Mayberry that she will be going back to school to study body movement and healing at the age of 59. A few of the older members (like myself), share their enthusiasms of literature from the staid classics of the western canon, to the graphic novel and the offbeat.

At one session, we collaborated with the folks at Hospitality House – where aspiring and established writers read their works in front of an audience. This is the kind of endeavor that people all over the world seem to expect from a city as culturally rich as San Francisco. These gatherings of artists are a vital link to forming healthy communities where people feel part of – instead of alienated from.

They empower folks and imbue the city with their considerable talents. Rebecca Solnit, a nature writer wrote a book called “Hollow City”—about the deadening of community in San Francisco. There is much truth to Ms. Solnit’s lament. But with dedicated people like this, community might just live another day.

EDITOR’S NOTE: Scott Stevens is a tenant representative at the Star Hotel in the Mission. He will be featured in the upcoming issue of Teaparty Magazine. The “’Sho you write” workshop meets at the Central City SRO Collaborative at 259 Hyde Street on Tuesday nights, from 5:30-7:30pm. For more information, call Tony Robles at 415-775-7110.