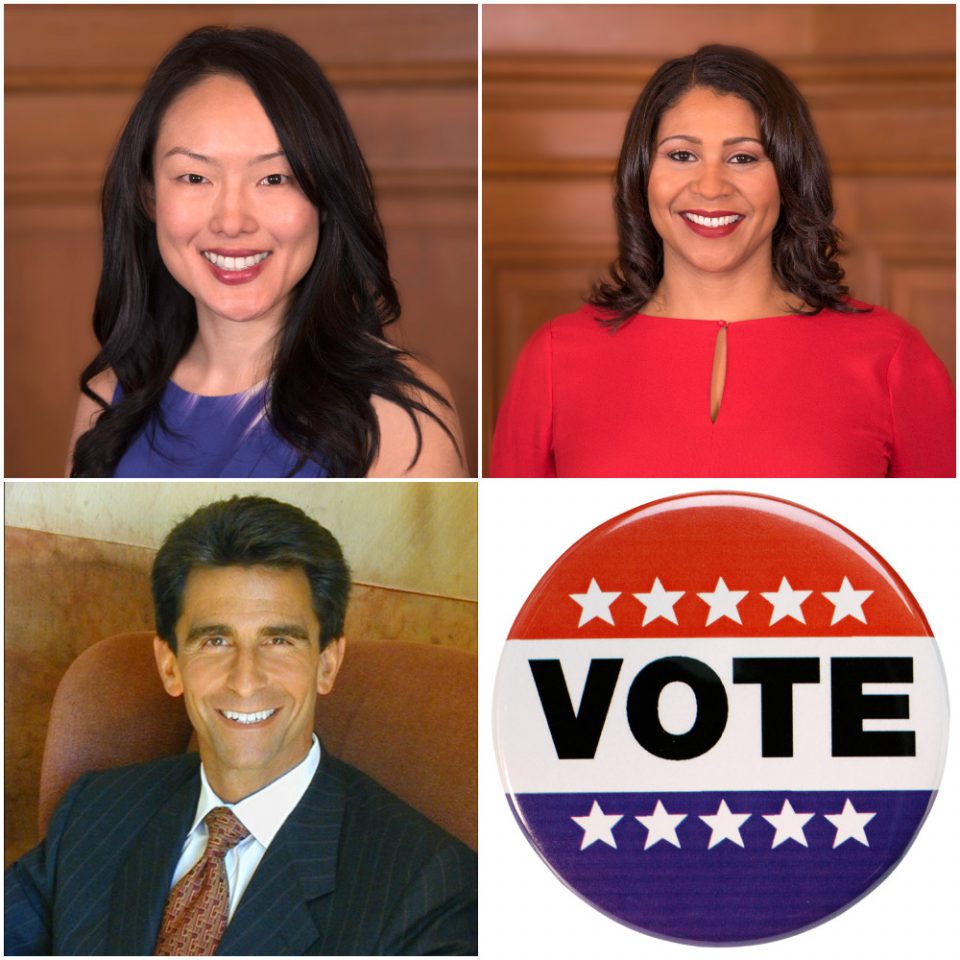 The field to replace Mayor Ed Lee is set. It is surprising for two reasons.

First,  several major candidates were expected to enter the contest since every supervisor and elected official other than David Chiu could run in June without giving up their current office. Yet we have only three candidates with a potential to win: London Breed, Jane Kim, and Mark Leno.

Second, Ed Lee’s success at mobilizing Chinese-American voters seemed to ensure that either or both Carmen Chu or David Chiu would run. Neither did. I believe both made the right decision; both can also still run in November 2019 if the June winner disappoints.

Here’s my take and prediction on the race.

London Breed is a rising political star. The question is whether this mayor’s race comes before she is sufficiently well known to voters citywide.

Breed backers hope that keeping her as Acting Mayor will raise her profile. But the energy they are devoting to this could be a classic case of fighting the last war.

Breed backers see a parallel with voters liking Acting Mayor Ed Lee’s performance so much that they rewarded him with his own term. But as I have pointed out before, voters did not see Lee getting unfair advantage for a planned mayoral run when he was appointed Acting Mayor. Lee had pledged not to run.  Further, Lee had ten months to prove his abilities as mayor prior to the election and several months before filing to run in November; Breed’s tenure as Acting Mayor would coincide with her either being a likely or actual candidate.

I have previously expressed my preference for a true caretaker mayor. I think that better serves the city. But if Breed retains the Acting Mayor position at the Board’s January 16 meeting it may help her less than her supporters believe.

Ed Lee overcame not previously running for citywide office in the 2011 election for two reasons: first, he was the city’s first Chinese-American mayor and enormously popular with that powerful share of the electorate; second,  he had been working with the public in San Francisco for over thirty years.

In contrast, Breed lacks the unchallenged support of a broad constituency base. Nor is she well known outside her district. Despite her inspiring personal story, Breed had a surprisingly close re-election win in 2016 against a candidate who received few major endorsements.

Breed’s strength is that in a race with Kim and Leno she could get most of the voters in the city who do not identify as “progressive.” She could also get voters who want a female mayor, and prefer her to Kim (or get Kim’s second place votes from such voters)

That’s a lot of votes and it explains why some believe Breed will win.

Kim’s loyal but narrower constituency base means she would have benefited most from a larger field. A larger field also made it less likely that independent campaigns would target her with hit pieces, as occurred in her State Senate race.

But with the small field I could see a lot of realtor money coming in against Kim. Some will be diverted to attacking Leno, but Kim will be the chief target.

Kim’s main obstacle to reaching Room 200 is Leno. As I wrote on November 2, 2017, “Leno Goes Left,” Leno helped repaired his relationships with the progressive wing of the LGBT community by endorsing Rafael Mandelman in D8.  Are Mandelman allies now going to endorse Kim over Leno, who would become the city’s first gay mayor?

I could see clubs making duo endorsements but voters only get one first choice. I see Leno being the first choice of most LGBT progressives.

Kim is wildly popular with City College students and staff, as well as with the city’s left. But her ability to expand her electoral universe beyond her core supporters is limited.

The first was David Chiu. With Chiu out of the June race and no candidate with a clear hold on the Chinese-American electorate, it would not surprise me at all to see Leno win support among that constituency.

Leno’s second obstacle was that he would face voters after being out of office for nearly three years. The June 2018 race comes soon enough for most voters to still remember him.

Leno has shown in all of his election wins (particularly in his Assembly race in 2002 and State Senate contest in 2008) that he can draw votes from a very broad constituency. With Breed unlikely to get progressive votes and Kim unable to expand beyond progressives, Leno is really the only candidate who will draw a lot of votes everywhere.

Leno will likely be the second choice of both Breed and Kim voters. That greatly increases his chances for victory.

Leno may not have the most passionate support base but he does not trigger passionate opponents who will spend heavily to defeat him. Even his non-supporters respect Leno’s integrity and qualifications to be mayor.

I normally start the year with a Political Predictions piece. I did not for 2018 because the mayoral field was not yet known. Now it is.

I see Mark Leno winning and becoming the city’s first gay mayor. His victory will signal the appearance of San Francisco moving left, and of moving in a more progressive direction from the Brown-Newsom-Lee years (whether Leno actually implements more progressive policies than the very progressive but moderate-identified Lee will be seen).

Leno is the perfect candidate for an electorate impacted by national politics and hungry for Change. Electing a gay mayor is change. For all the talk about San Francisco having had only one prior female mayor, the closest any gay or lesbian candidate has come to winning the mayor’s race is when Tom Ammiano lost to Willie Brown by 19% in the 1999 runoff.

That’s not very close. And Leno’s victory would be a watershed moment for San Francisco’s legendary LGBT movement.

London Breed has a bright political future. At 43, she will be younger at the time of the 2027 mayor’s race than Mark Leno is now. But 2018 is Leno’s time.

Mark Leno will be San Francisco’s next permanent mayor.

Randy Shaw is Editor of Beyond Chron. He describes the launching of SF’s LGBT movement in the Tenderloin in The Tenderloin: Sex, Crime and Resistance in the Heart of San Francisco