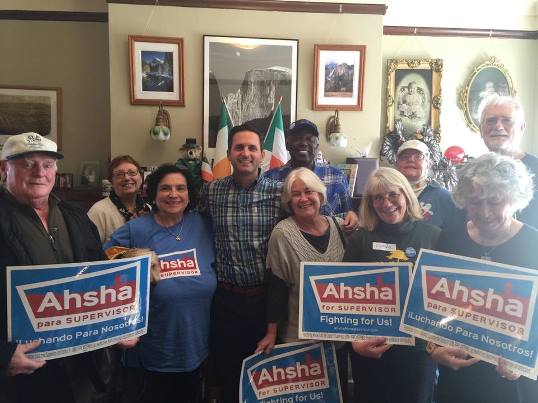 Donald Trump has unified the city’s politicians in staunch resistance to federal attacks on city residents and policies.  Mayor Lee’s defeat of four ballot measures attacking his power (Props D, H, L. and M) repudiated claims that he is unpopular.  And Asha Safai’s win in D11 replaces a progressive hostile to Mayor Lee with one open to working with the mayor, reducing future Board-Mayor confrontations.

The elections also struck a blow against the simplistic labeling of Supervisors as “moderate” or “progressive.” The notion that Safai’s victory shifted Board of Supervisors control to “moderates”  is based less on issues than on subjective political assessments that are often self-serving.

D10 Supervisor Malia Cohen is not a “progressive” despite leading the fight for Prop V, the soda tax. Isn’t fighting to protect children’s health a stronger indicia of a “progressive” politician than Yee’s signing on to ballot measures shifting mayoral control of housing and economic development activities to a Commission (Prop M) or changing the way supervisors are appointed (Prop D)?

Those who benefit from promoting these labels had a field day bashing newly elected D11 Supervisor Ahsha Safai. Safai withstood a blistering negative campaign from backers of Kimberly Alvarenga, who accused him of being an agent of developers, realtors and other non-progressive forces. Yet those criticizing Safai for these donations never criticize Peskin and Kim for their support from such interests (when the SF Apartment Association endorsed Peskin in his race against Julie Christensen, progressives saw that as a sign of his political strength).

The subjectivity of who is a San Francisco “moderate” or “progressive” was fully exposed in the D5 Supervisor’s race. Incumbent London Breed is always placed in the “moderate” camp. Challenger Dean Preston is an unquestioned “progressive.

Yet a progressive establishment identifying Safai as the incarnate of evil took a pass on challenging Breed. These progressives were so focused on D11 that they missed a critical opportunity in District 5.

To the surprise of everyone but himself and his campaign volunteers, Dean Preston ended up with 48% of the vote. That is remarkable. Preston nearly won despite not being endorsed by Peskin or Kim, and with the progressive reformers controlling the SF Democratic Party not simply staying neutral but actually endorsing Breed.

Peskin stayed neutral in exchange for Breed backing the 60 day restriction on Airbnb rentals the Board passed after the election. Other progressive constituencies and clubs also stayed out of D5.

Would more progressive endorsements of Preston changed the outcome? Would Preston have won if the progressive DCCC majority stayed neutral rather than endorse Breed ?

It’s hard to know because had Breed been confronted by unified progressive opposition she would have gained more independent expenditure money on her behalf. Like Alvarenga in D11, Preston was helped by not facing a well- funded negative campaign.

Kim understandably stayed out D5 because she wanted to draw votes from backers of both Breed and Preston. But the combination of Breed’s demographics, the certainty she would win, and private deals between politicians meant that the progressive establishment that unified behind Ronen, Fewer and Alvarenga did not get behind the equally progressive Preston.

The San Francisco Tenants Union went all out for Preston, and almost brought him victory. The Bay Guardian (i.e. Tim Redmond) also endorsed him. Preston’s picture with the other progressive favorites on the Guardian cover no doubt helped immensely in D5, the one district where the former paper still has sway.

Breed entered 2016 with a record—strong support of Airbnb, weak on inclusionary housing, and a big backer of Julie Christensen against Peskin—that made her vulnerable in progressive D5. She then voted almost consistently progressive in 2016, which helped her ward off Preston’s challenge.

If Breed continues to vote with progressives, then all this talk about “moderates” securing control of the Board is even more confused. Breed may be like other politicians—Mark Leno and Bevan Dufty the clearest examples—who entered office with a moderate set of views which became more progressive through experience.

The November elections show that its time to throw outdated political labels overboard. San Francisco’s new political landscape requires defining politicians by how they vote on specific issues, not by increasingly meaningless labels of “progressive” or “moderate.”

Fortunately, the best part of the new landscape may be that political decisions can be made with no major elections occurring until November 2018. That means our Supervisors can focus on what’s best for the city rather than what best impacts voter turnout or their future political careers.

As for the next Board President, Breed appears to have the votes to continue in that role.