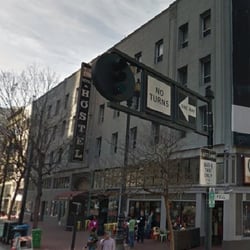 San Francisco does not have nearly 2000 vacant SROs

A recent story in SF Curbed described designer Eric Schmitt’s placing signs reading “Housing Displacement Facts” on buildings which he claimed were “vacant” or partially vacant SROs.  According to the story, the city “has 1,827 rooms sitting vacant in licensed SRO hotels, enough to house nearly a third of the city’s estimated homeless population.”

That story is extremely misleading. It relies on an earlier story by Joe Eskenazi in the SF Public Press in which the reporter stated “that some building owners are holding rooms empty, perhaps for years, driving up the value of a building rather than let them out to low-income renters or the city to house the homeless there.”

That statement is false.

I was interviewed by Eskenazi for that story. I have no idea how he reached the conclusion that owners keep units off the market for years instead of renting them out.  Virtually every owner of a currently vacant SRO I know wants  to lease it out for city homeless programs. For example, the owner of the Bristol Hotel at 56 Mason Street, which got one of Schmitt’s signs, offered to lease the the hotel to the city for step-up housing for formerly homeless single adults. The city rejected the offer, feeling it was too expensive.

My office regularly tracks hotel vacancies. I cannot think of a single SRO owner who thinks that a good profit strategy is keeping units off the market.

Here are the facts about Schmitt’s allegedly “vacant” buildings.

Among the buildings listed by Schmitt is 149 6th Street, the Minna Lee Hotel This 51 unit property was closed due to a fire and renovations did not begin for nearly a decade. The hotel is slated for use for a city homeless program.

The Bristol Hotel, mentioned above, has been undergoing a gut renovation which has kept it closed for years. Renovation has been delayed by neighbors filing discretionary review applications, with one for the windows to be heard soon.  That the Bristol has all private baths and is only 57 units total (16 are deemed “tourist”) led the city to decide that the economics of nonprofit master leasing was infeasible.

706 Polk is primarily a tourist hotel. As is 1412 Market (pictured above), which has 105 tourist units and only 15 residential.

Not included in Schmitt’s list—but included in the city’s list— is the long vacant Oakwood Hotel, a 70 unit building at 44 5th Street. That hotel is also undergoing a major renovation and is off the market. The owner wants to lease it to the city for housing the formerly homeless upon completion.

The “evidence” of high SRO vacancies comes from a single source: the annual unit usage report that SRO’s file with the city. But that report only tabulates SRO vacancies on a single day, which most recently was October 15, 2017.

Vacancies on any one day says nothing about the broader availability to tenants. Most SRO rooms are off line for at least a week if not longer following tenant turnovers. SRO’s have always had higher vacancies than apartments because their lack of security deposits allow tenants to suddenly leave without penalty, which apartment tenants cannot do.

The Tenderloin Housing Clinic, which I head, is always surveying SRO’s for vacancies. We do so both because we operate diverse homeless programs where tenants need permanent rooms and because we are always seeking to uncover illegal tourist rentals.

Based on what we have found, there are fewer real SRO vacancies today than perhaps ever before. This is largely due to the dramatic number of master leased hotels (THC alone leases 21)  and also due to tenants living in SRO who in prior decades could have afforded a studio apartment.

The SRO market is tighter than ever. And we need to prioritize a homeless policy based on this reality, not a false perspective that there are plenty of SRO rooms out there if only we could get owners to make them available.

San Francisco’s top priority should be dramatically expanding what is known as “step up housing.” This involves getting longterm tenants in supportive housing into apartments, thus freeing up vacancies in existing master leased hotels. Sadly, support for step up housing from city officials has not been matched by the money to implement this homelessness reduction strategy on a grand scale.

This requires a far more sophisticated and strategic implementation of the city’s “Moving On” voucher program (akin to Section 8), currently stymied by a lack of apartment vacancies. This voucher program gives existing SRO supportive housing tenants the rent amount needed to get higher quality housing, but too few tenants have benefited due to the program’s inability to secure sufficient apartment vacancies. This results in so few SRO vacancies that the vast majority of those staying in Navigation Centers do not get moved into housing.

The city needs  a new strategy. It needs to secure SRO units with private baths and communal kitchens for longtime supportive housing tenants. This would expand permanent housing slots for those in shelters. The city has to yet to try to make this happen.

Second, the city must take another look at micro-PAD housing. Since I urged the city to support such housing in November 2016 (“SF Needs Micro-Pad Housing”), no project has been approved. The city has backed modular housing but that provides nowhere near the cost savings or housing density of the micro-PAD.

Given San Francisco’s worsening homelessness crisis, it’s shocking that  a strategy that could readily add 1000 permanent housing units for the very poor is still off the political table. All our talk about a homelessness “crisis” is not producing a “crisis-level” response.

We have a huge supply problem in San Francisco when it comes to housing people without homes. We must acknowledge this. Tackling this challenge means  shifting money from Navigation Centers to step up housing.

It also requires getting more creative in expanding where we are looking for housing, not falsely believing that nearly 2000 units could be available  if only SRO owners would rent them out.

Randy Shaw is Editor of Beyond Chron. He discusses the history of the city’s SRO’s in his book, The Tenderloin: Sex, Crime and Resistance in the Heart of San Francisco