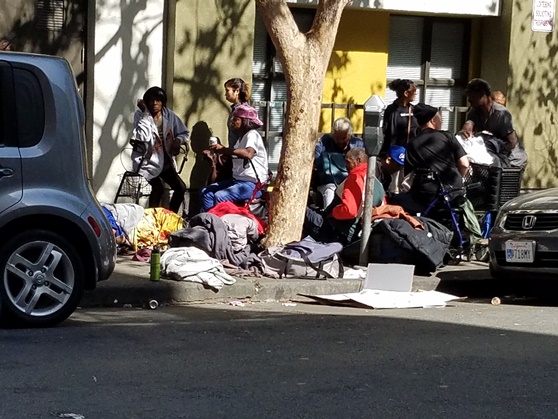 SF Lets Anything Go on 400 Block of Turk

When I first got involved in San Francisco’s Tenderloin in 1980, I wondered why so many openly illegal drug sales activities were allowed  in the neighborhood. Then residents explained to me about  “containment zones.”

Police, elected officials, and city staff  always denied that the Tenderloin was a containment zone. They justified the openly criminal conduct by explaining how hard it was to arrest or convict drug dealers, or to stop them from simply moving to another block in the community.

But as the late Leroy Looper, owner of the Cadillac Hotel, used to say, if you brought those group of dealers on Eddy Street over to Union Street, they “wouldn’t last five minutes.” Nor would they be allowed to move to another block in Pacific Heights or the Marina. The police would tell them that such actions were not permitted in these areas, implicitly or explicitly urging them to return to the Tenderloin.

Looper’s point is just as true today. All the excuses we hear about why drug activity cannot be permanently extricated from a particular block disappears if that block were in Noe Valley, the Richmond, the Sunset, North Beach, etc.

Sidewalk drug dealers are always barred from San Francisco’s gentrified neighborhoods. They are contained in working-class neighborhoods like the Tenderloin.

Under Mayor Ed Lee, the Tenderloin neighborhood itself ceased to be a drug containment zone. But the city still intentionally confines drug activity to the 400 block of Turk, between Hyde and Larkin.

Why do I say “intentionally”? Because when the mayor and Chief of Police have been told all about the drug activities on the 400 block of Turk without any meaningful action taken in response, then one has to conclude the city wants the block to remain that way. 400 Turk remains a place to safely sell and inject drugs because top city officials do not want the drug encampments returning to their former home on Larkin Street between Market and Grove.

I’m glad that the longtime drug scene adjacent to Bill Graham Auditorium and across from the Main Library is gone. But it’s an outrage that it was allowed to relocate months ago to the 400 block of Turk— and to remain to this day.

400 Turk includes three affordable housing buildings, a methadone clinic, a small laundry, a children’s tot lot, a deli, a small market, a corner liquor store and Herrington’s bar. Its biggest frontage is the long vacant office space owned by the San Francisco Housing Authority at 440 Turk (the photo accompanying this story shows the daily scene in front of 440 Turk).

The Tenderloin Housing Clinic, which I head and publishes Beyond Chron, has its main housing office at 472 Turk Street. That’s next door to the 440 Turk drug encampment. We also have an office for clients at 449 Turk and our second largest administrative office is also on that block.

Mike and Jean Aburahma, who have run the Turk & Larkin Deli for 39 years have pleaded for city intervention to stop the drug encampment outside their business. They have forcefully made this plea directly to Supervisor Jane Kim and Mayor Lee, with top police brass present.

Yet nothing has changed. If anything, the 400 Turk drug scene was as bad as ever last week. None of the businesses on that block are apparently important enough to the city to warrant the type of police protection that merchants in other parts of San Francisco routinely expect.

I’ve spent hours upon hours trying to deal with the 400 block of Turk. THC employees do not feel comfortable having to regularly walk past the scene. Nor do our tenants, including homeless persons who have to come to 472 Turk to get housing.

I got the Housing Authority to post a security guard a few times a week, but it had no effect. Only the police can get those openly shooting up and buying or selling drugs to leave, and its clearly not a priority (if it were, the scene would be long gone).

Everyone I have talked to, including the Mayor, Chief of Police, and SF Housing Authority officials, has said that the scene on the 400 block is intolerable. After all, kids walk by that street on their way home from the Tenderloin Community School. There is a tot lot on the corner. TNDC owns senior housing right in front of the 440 Turk encampment.

Yet nothing changes. If city officials really felt the situation was intolerable, they would not be forcing Tenderloin residents and workers to tolerate it.

In addition to the drug encampment, dealers freely operate on both sides of the street. Some have relocated from 101 Hyde. Others have caught on that the city sees the 400 block as a safe zone for dealing, and have relocated there.

The Department of Homelessness will move into 440 Turk, but not until late 2018 or early 2019. For reasons nobody seems to understand, long planned renovations of the space have yet to begin.

So there is no quick fix in sight for the 440 Turk encampment absent police action.

Turk Street has been through this before.

Check out the photo accompanying my March 25, 2014 story on the drug activity on the first block of Turk Street. After years of dealers approaching three figures on that block, by June 2014 the scene was gone. Tenderloin residents took back the first block of Turk because Mayor Lee demanded that the police install a fixed post police presence following a shooting in the area.

The first block of Turk remains dramatically improved. So why has there been no fixed police presence on the 400 block of Turk despite the urging of so many?

City officials offer the same excuses that they used bout the entire Tenderloin for decades. It’s the laws, courts, judges, lack of resources etc.  We are told these things “take time,” although the problem has continued for months.

And as was true then, none of these excuses would be invoked to allow drug encampments in the city’s upscale neighborhoods—all of whom operate under the same justice system as the Tenderloin.

That’s what happens when the city chooses a block as a drug containment zone.