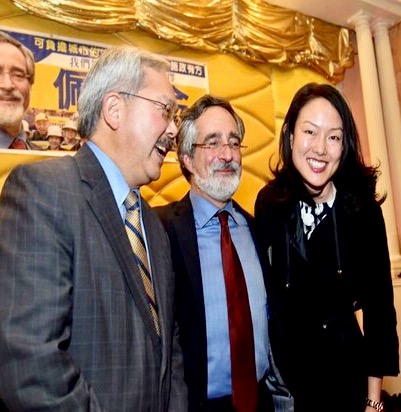 A new year has just begun and many cannot wait for it—and the next three years—to end.  San Franciscans are ready to protect the city against Trump policies and we’ll soon know what that entails.

Meanwhile, cities can still act locally to further social and economic fairness. 2017 is the first time since 2013 that San Francisco political decisions will not be shaped by upcoming November elections, which itself is reason to cheer.

Here is my take on what Mayor Lee, the Board of Supervisors, and activists  should prioritize in 2017.

Mayor Lee begins 2017 with his full powers intact (after voters rejected Props D, H, L and M) and with a Board majority willing to work collaboratively with him. Now he must overcome the second-term blues that that have bedeviled prior mayors.

Lee’s two predecessors accomplished little in their second terms. Gavin Newsom was off and running for statewide office after his 2007 re-election; his second term record has been forgotten. Willie Brown faced a new district-elected Board following the 2000 elections and spent his last three years battling with Chris Daly, Aaron Peskin and other Supervisors.

Can Ed Lee carve out a more productive last three years?  He’s not seeking higher office and faces no major political resistance, so I’m betting he can. Here is what he should do in 2017.

Ed Lee has already done more to address San Francisco’s housing crisis than any prior mayor. But he wants and needs to do more.  I think Lee should cement his housing legacy by ending the unnecessary delays that have become common in Planning Department reviews of new housing.

San Francisco subjects housing developers to likely the longest process prior to reaching the Planning Commission in the United States.  Lee knows this glacial process hurts the city. He now must assign a point person whose full time job is ensuring projects avoid unfair delays and who is empowered to act.

Only a fulltime person in the mayor’s office can prevent delays caused by  planners taking leaves, lost files, or misguided second guessing of project designs (If you need more specific examples, talk to any developer). Having a mayoral staffer call over to planning on a random basis is not enough

The city’s development boom has put tremendous pressure on the Planning Department. The sheer volume has slowed individual projects. No Planning Director can keep track of all pending developments and this need for more oversight did not just begin in the past five years—it is longstanding.

Some mayors have dealt with this problem by personally calling Planning Directors and demanding that certain projects get expedited. But that system of favoritism is not the right approach, and not one ever associated with Mayor Lee. Better to have a point person that developers large and small can go to for help, just as small business people can get assistance with city agencies from other fulltime mayoral staff.

The Mayor will have struggles with the Board in 2017 over inclusionary housing percentages and density bonuses, but these are less important to fulfilling his housing agenda than getting a point person to stop planning delays. I know that as a former department head Mayor Lee does not like to be seen “micromanaging” city departments, but this is really about making the system work.

If you doubt these development delays hurt the city, consider how they have slowed improvements in Mid-Market. Last week, the owner of Showdogs and Machine Coffee at 1020 Market in the heart of Mid-Market announced the closure of both, saying “the neighborhood has taken a bit of a turn for the worse…. If you go through our Yelp reviews, you’ll see dozens of people that say the food is great but the neighborhood, the neighborhood is just no good.”

I was at the ribbon cutting for Machine Coffee when it opened in 2012 and recall Mayor Lee urging at that time that the nearby 1028 Market site be developed.  I don’t think that block has gotten worse (which would be hard to do); rather it is a lack of progress amidst rising expectations that were not met.

Why were they not met? Chiefly because none of the nearby major housing and hotel developments that those businesses counted upon— 1066 Market, 1028 Market and 950-974 Market—have yet to even break ground.  All are victims of planning delays that they would not have experienced in other cities.

Jeannette Sadik-Kahn’s book Streetscape on NYC’s rapid changes showed there are ways around the roadblocks to creating safer and better streets, but it takes a mayor who empowers a city official to make it happen.  SFMTA head Ed Reiskin has far too much on his plate to be that person.

The mayor needs to appoint someone like former SF Bike head Leah Shahun to oversee all Vision Zero/ped safety/streetscape improvements. The appointment of someone trusted by the transit/Vision Zero community (Shahun is founder of the Vision Zero Network) would immediately bring confidence that City Hall is trying its best to get things done.

A Vision Zero point person (ideally someone with roots in the area) would bring the type of public confidence to that critical area of government that people have toward the cleanliness of city sidewalks. When those familiar with city government see trash on San Francisco streets, they know that if they call DPW it will be picked up. That’s because we have Mohammed Nuru as head of DPW, a man who has made such a mission of clean sidewalks that he has earned the monicker, “Mr. Clean.”

In 2017 the Mayor needs to convene stakeholders to reach a compromise on short-term rental legislation. The current law allowing hosts to rent to tourists year-round goes far beyond what Airbnb and the short-term rental market is supposed to be about.  It unfairly competes with the city’s hotel industry (which has to provide sprinklers and other safety features not required for apartment tourist rentals), and artificially reduces housing supply.

Despite warring dynamics between the short-term rental industry and ShareBetter SF, Mayor Lee and Aaron Peskin know how to get these deals done. The hotel industry faces a sharp occupancy decline when Moscone Convention Center closes for renovations in April; this should make reaching a compromise before then a priority.

After several supervisors put their legislative wish lists on the November 2016 ballot, expect a less aggressive push for major new legislation in 2017. Many of the new battles will again be about housing.

Supervisors Peskin and Kim have already signaled that they want to move legislation enshrining a 25% inclusionary housing requirement into law. This will be described as a “test” of the new Board’s concern with affordable housing. The debate gives all sides an opportunity to proclaim why their percentage is best and to explain why it will or will not kill future projects.

These debates over inclusionary percentages have dominated city housing debates, but the the vast majority of projects built in the near future go under existing rules and won’t be impacted.

In December, Peskin introduced the most important affordable housing protection measure that will come before the Board in 2017: a strengthening of the law protecting San Francisco’s SRO (single-room occupancy) hotels. San Francisco is losing hundreds of residential SRO units to tourists under the subterfuge that by paying a weekly rent they are actually “intending” to relocate to the city and hence are “permanent residents” under the city’s San Francisco Residential Hotel Unit Conversion and Demolition Ordinance (“the HCO’).

The HCO was written to prevent residential units from being rented by the week to tourists, but enforcement requires time-consuming legal discovery that city inspectors are not able to do. Peskin’s measure will solve this problem and also bring the HCO’s fines and penalties up to date (these charges have not increased since 1990).

Trump’s first budget will cut or end federal funding for programs currently benefiting San Franciscans. And if past experience is a guide, this will cause pressure from those running or being served by these programs (backed by sympathetic media stories) for San Francisco to “backfill” the federal cuts with local dollars.

Some federally funded programs deserve local backfill. But some do not.  Supervisors should fund programs on their merits, and not allow Trump Administration cuts to decide San Francisco’s budget.

Finally, my own political priority for 2017 is getting apartments for the many SRO tenants who have been leading the fight to improve the Tenderloin and Sixth Street  and deserve to live with private bathrooms and cooking facilities. These San Francisco residents cannot  afford the standard inclusionary housing rents but there are other options—and I and the organization I head will be doing everything we can to implement these options (see the video on the front page of Beyond Chron) this year.

I hope everyone had a restful holiday season and is ready for the new year.

Randy Shaw is Director of the Tenderloin Housing Clinic and Editor of Beyond Chron. Start the new year by reading his book, The Tenderloin:Sex, Crime and Resistance in the Heart of San Francisco.