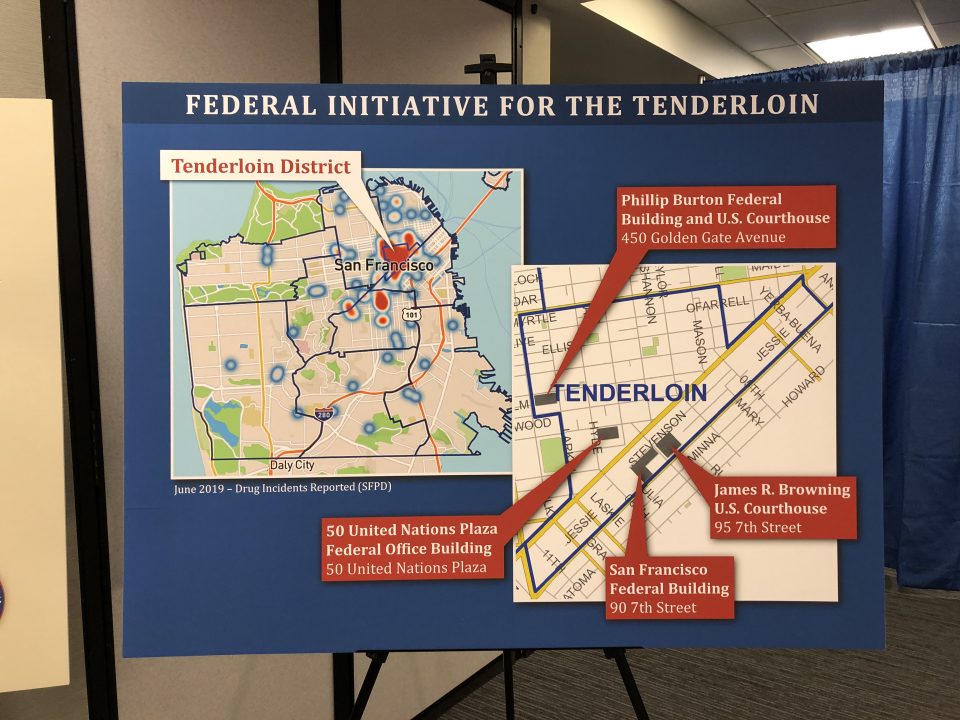 Last week’s U.S. Attorney crackdown on Tenderloin drug dealing drew massive media coverage. The key takeaway: federal law enforcement publicly committed to ensure that the “rule of law” applied in the Tenderloin, where it has long been ignored.

A so-called “Tenderloin Station” covering Market Street down to 3rd Street, UN Plaza and South of Market up to Mission Street never made sense. Tenderloin activists predicted this redistricting would damage the neighborhood by eliminating police staffing and the past four years have proved them right.

But  even though the bad decision was made by Chief Scott’s predecessor Greg Suhr, the current chief refuses to fix the mistake. Call it institutional defensiveness. Or a police department unwilling to admit that residents had better insight into how their neighborhood needed to be policed than the “experts” at the SFPD.

But here’s the bottom line: You can’t place the high drug dealer areas of the Tenderloin, Mid-Market, UN Plaza, 6th Street, Powell Street and the shoplift-heavy Westfield Center in the same police district. Too many intense neighborhoods in the same district doesn’t work.

Chief Suhr and his allies forgot  why a Tenderloin Task Force and then a Tenderloin-based police station was created in the first place: to target resources directly into the community. In retrospect, it appears that the SFPD was more concerned about shifting resources to upscale Mission Bay than it was about policing the Tenderloin (a view consistent with Greg Suhr’s consistent negativity over prospects for the Tenderloin’s improvement).

If SFPD was committed to creating a district filled with high-crime areas,  it needed to provide a massive increase in staff. That did not happen with the new Tenderloin Station.

Arrests without police visibility to deter dealers from doing business are great for stats but don’t do much for neighborhood safety. And I can’t recall ever seeing so little police visibility in the Tenderloin, all because the staffing levels are so inadequate (Captain Fabbri does the best he can with the limited resources he has been given).

In March 2018 I wrote “Blame Bloated Southern Station for Market Street Crime.” I explain why Chief Scott should shift officers from Southern to Tenderloin Station, or at least give South of Market including Sixth Street back to Southern.

At the time Southern only had twenty fewer staff than the far higher crime Tenderloin Station. Rising Mid-Market crime was a direct result of this poor staffing.

I’ve written a version of “How Police Fail the Tenderloin” many times. It’s time to shift control over Tenderloin policing strategy to those willing to change course.

The time may have come for D6 Supervisor Matt Haney to join with colleagues to put a measure on the November 2020 ballot shifting Market Street and SOMA back to Southern Station. Returning Tenderloin Station to its historic boundaries is essential.

I think voters will agree.

How is it that a “progressive” city that prides itself on supporting immigrants denies basic safety to the immigrant families of the Tenderloin? And that a city concerned about inequality accepts that residents of the city’s most low-income neighborhood do not get the benefits of the rule of law?

Randy Shaw is Editor of Beyond Chron and Director of the Tenderloin Housing Clinic. He is the author of The Tenderloin: Sex, Crime and Resistance in the Heart of San Francisco.