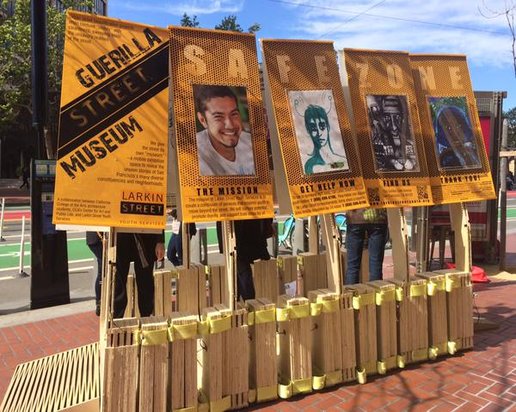 A scene from the Market Street Prototyping Festival, April 2015

The San Francisco Municipal Transit Agency (SFMTA) votes today on expanding car restrictions and transit-only lanes on the “Mid-Market” stretch of Market Street between 3rd and 8th Streets. The decision is clear. And it is momentous.

A vote in favor of car restrictions continues the remarkable progress Mid-Market has made since Twitter moved to the area; by increasing pedestrian and bicycle safety and making sidewalk dining more desirable, it is a vital step in Mid-Market’s positive transformation.

In contrast, a no vote leaves Mid-Market a traffic mess. It is a vote to maintain an unacceptable status quo, and signals that SFMTA lacks confidence in the area’s future.

While the forces leading the effort for car restrictions are focusing on the increased safety—using the hashtag #SaferMarketSt to highlight this point—much more is at stake. Mid-Market will not reach its economic potential if traffic continues to render walking and bicycling undersirable; cars are the last major obstacle now holding Mid-Market back.

Its vacant and under-utilized buildings had to be renovated and reoccupied. Ground floor retail businesses had to attract more customers. Its public drug dealing and problem street behavior had to be reduced.

And as the linchpin to all of the above, the street had to become more pedestrian and bicycle friendly.

Market Street’s traffic snarls are nothing new. As I write in my new book on San Francisco’s Tenderloin neighborhood, Market Street became choked with traffic soon after the Bay Bridge was completed in 1936. The street was not properly designed for auto traffic. Frustrated drivers have contributed to Market Street’s unfriendliness to pedestrians and the public’s reluctance to patronize outdoor cafes and restaurants on what should be a corridor filled with both.

On April 29, 2011, Mayor Lee announced the first series of community workshops to create a Better Market Street plan. A second series of workshops was announced in July 2012, and the final plan was supposed to begin implementation in 2013.

But progress stalled. I described on June 17, 2013 (“Can Supes Break Better Market Street Logjam”?) how the ambitious $250 million plan had been pushed back to 2017, and that activists were pressing Supervisors to expedite the progress.

The San Francisco Bicycle Coalition has provided the key leadership behind this effort to jumpstart the Better Market Streets plan. The Bike Coalition recognizes that the traffic mess on Market limits bike ridership to downtown, but it has also offered a broader vision of a revitalized Mid-Market where pedestrians and bicyclists no longer have to dodge cars.

In January 2014, former Supervisor David Chiu introduced a measure to restrict private cars in Mid-Market. But a month later the SFMTA Board punted on moving forward on Chiu’s plan, despite its majority support on the Board of Supervisors. I questioned whether SFMTA was up to the task of improving bicycling and pedestrian safety citywide, and urged activists to push a ballot measure to create a Department of Pedestrian Safety.

If the SFMTA fails to support car restrictions today, that ballot measure for 2016 becomes essential.

Since early 2014, WalkSF has joined with supervisors and neighborhood activists in pushing Vision Zero, a strategy to end pedestrian fatalities from cars. The addition of Vision Zero to the SF Bike Coalition’s arguments has increased support, with the SFMTA now having the chance to reverse its past lack of support for restricting car traffic in Mid-Market.

In an act of extreme political foolishness, the private car service Uber has come out against the car restriction proposal. It opposes banning turns on Market Street even though this is essential to make Mid-Market more pedestrian and bicycle friendly.

The SF Bike Coalition has put out a great statement on Uber, Stand up against Uber for a Truly Safer Market Street! It exposes the ride sharing company’s false statements claiming that a strategy designed to make Mid-Market safer will do the opposite.

Having already gotten bad press for its variable price structure and lack of disability access, Uber should have align with the public interest in a better Mid-Market. Instead, it is the chief opponent.

Uber fails to realize that a Mid-Market that attracts more patronage means more business for their drivers. For example, Mid-Market has the beautifully restored ACT Strand opening this week and the wildly popular Equator Coffee in the ground floor of the Warfield Building. Both add to Uber’s potential customer base—assuming those who care about Mid-Market still wish to patronize a business trying to hold the area back.

Vision for the Future

We all saw the possible future for Mid-Market last April during the Market Street Prototyping Festival in the area. It confirmed that people will flock to the neighborhood’s sidewalks if they offer a positive environment. Enhanced pedestrian safety and increased bicycling also makes Mid-Market sidewalks more desirable, and add to the growth of the area’s restaurants and cafes (the success of The Hall shows that outdoor restaurants in Mid-Market can succeed).

Mid-Market has seen two of its greatest historic buildings restored to house Twitter and Zendesk. The historic Wilson building at 973 Market Street has been reopened, the Renoir and Grant Building are being upgraded, and the renovation of the landmark Hibernia Bank building will be completed in September.

These are only a few of the many positive developments in Mid-Market these days. Now it is up to the SFMTA Board to continue this progress.

Market Street’s future is as a bicycle and pedestrian-friendly thoroughfare. Let’s hope today marks an exciting new chapter in its history.