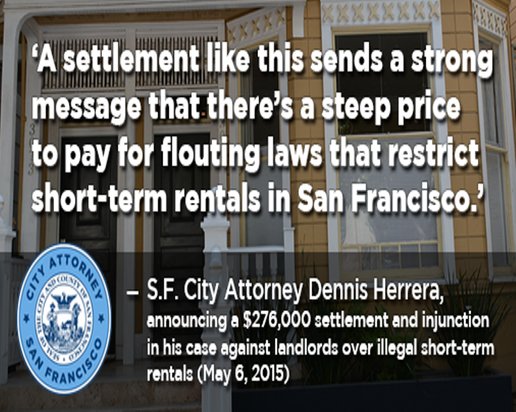 As the San Francisco Board of Supervisors holds a hearing today on new short-term rental legislation, the real news was last week’s Harvey Rose report showing that Airbnb rentals take up as many as 24% of vacant units. This amounts to potentially over 1900 units overall. Since Airbnb is the only short-term rental platform that provides such data, the actual number of impacted units is higher.

According to Supervisor David Campos, “What Airbnb is doing is taking away from the housing market thousands of units that are essentially helping to displace San Franciscans in every neighborhood.” Tenant advocates joined Campos in claiming that short-term rentals make it harder for tenants to find apartments by depleting San Francisco’s rental housing supply.

When it comes to short-term rentals taking vacant rental units off the market, progressives believe supply matters. But when it comes to building new rental housing to increase the rental housing supply, some progressives see adding additional rental units  as a negative.  They oppose such housing even though many of the newly built units have rents lower than the over $3000 for a one bedroom now being charged for existing apartments.

Few of the units taken off the rental market by short-term rentals meet the standard definition of “affordable housing.” Yet I don’t hear anyone claiming that we shouldn’t care about their loss because they cost more than working people can afford.

Some San Francisco progressives seem to hold diametrically opposed positions on the value of increasing the rental housing supply. Those finding the Rose report as confirming the harm caused by the loss of rental housing to tourist use should consider the similar implications for stopping new housing construction.

I have always supported new housing construction. People who want to own in San Francisco prefer not to displace tenants, and it’s better they buy a new condo than use Ellis or owner move in evictions to become owners—or create a market for Ellis evictions by purchasing a former rental unit that is now a TIC.

But my position, and my longtime support for the Residential Builders Association, has put me at odds with many affordable housing advocates. They feel that adding market rate housing furthers gentrification and displacement, and should be opposed.

If adding market rent units is seen as a  problem, these advocates should be cheering short-term rental providers. After all, they are reducing the city’s permanent market rate supply and accomplishing the same goal as those opposing new market rate housing.

While many deem market rate rental units “luxury”  housing when included in new buildings, vacant units in existing buildings are somehow deemed “affordable” when taken off the market for short-term rentals.

The facts on rents for vacant apartments in existing buildings do not support such a distinction. Based on the skyrocketing rents on vacant units in Hayes Valley and elsewhere, many illegally converted short-term rental units would fetch much higher rents than in new units.San Francisco’s beautiful older buildings have always brought higher rents, which is why housing in North Beach and other areas with little new construction is so expensive. The short-term rental industry also has a presence in more affluent neighborhoods than where much of the new housing is built.

I understand those who oppose short-term rentals due to the negative impacts tourists’ have on adjacent and nearby rental units/single family homes  (though permanent residents also make noise, have parties etc).  But if you oppose building units  unaffordable to the working-class, why get upset over the conversion to short-term rentals of similarly unaffordable apartments?

One difference is that sort-term rentals impact rent-controlled housing while new  units are exempt from rent control. Tenants have also been evicted so their units could be more profitably rented short-term, a strategy to avoid rent control that does not occur in newly constructed units (due to their exemption).

But let’s be consistent. San Francisco needs to protect and expand its rental housing stock. This does not mean that every proposed housing development should be approved, or that the city should overwhelm some neighborhoods with so many new developments that they threaten to alter its character.

It does mean, however, that you can’t say that new market units are bad for the city only if they are in newly constructed housing. Some critics of short-term rentals are exposing their own policy contradictions in not acknowledging that these units would rent to the same affluent residents that they are trying to keep out of San Francisco by opposing new housing.

Rose’s study covered a period in which essential enforcement mechanisms restricting illegal short-term rentals were not in effect. This will soon change.

While San Francisco has begun to crackdown on short-term rental violators, as City Attorney Dennis Herrera recently did in securing $276,000 in fees and penalties.  the Board must insert a nonprofit private right of action provision into the short-term rental law.  The organization I head, the Tenderloin Housing Clinic, has used a similar provision in the city’s SRO Ordinance for 25 years, and it makes a huge difference in enforcement.

A November ballot measure strictly regulating short-term rentals is moving forward,  so whatever the Board enacts may not be the final word.  If it is on the same ballot as the Mission market-rate housing moratorium   progressives backing both will be claiming that the loss of market rate rental units is bad for San Francisco for the short-term rental initiative and making the opposite argument for the other.