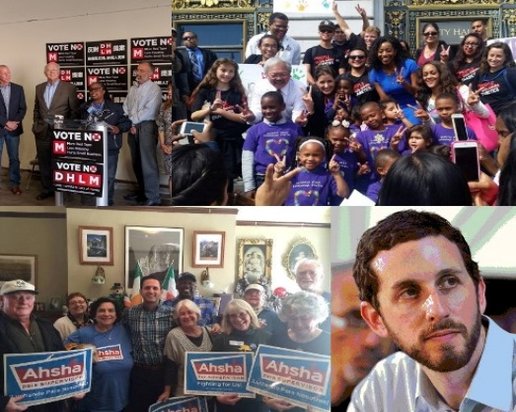 We ended Part One of our 2016 San Francisco politics review with the city’s supervisors qualifying ballot measures for November that they thought would help their campaigns and candidates they backed. This strategy backfired big time for progressives, and did not succeed for self-identified “moderate” supervisors either.

Because progressive supervisors believed in June that Mayor Lee was politically damaged—which turned out to be a serious strategic miscalculation— they followed the tried and true method of attacking a politician when they believe they are down. This meant that instead of the progressive centerpiece for November being economic justice, tenant protections, or specific strategies for promoting equity (which Jane Kim did with her Prop W for Free City College), progressives put four measures on the ballot weakening mayoral power.

But none had much grassroots interest.

John Avalos claimed that he had always wanted to change the supervisor appointment process, and now that he was leaving office this was his last chance. So Prop D emerged.

Norman Yee decided that November 2016 was the time for voters to give supervisors appointments to the SFMTA Board. That’s how a second effort to weaken mayoral power—one that also was never much publicly debated— became Prop L.

Nonprofit housing groups were so convinced they would lose on real estate backed Props P and U—they easily defeated both—that they wanted a ballot measure whose victory would automatically kill Props P and U even if they got more votes. Instead of simply putting a milquetoast measure on the ballot guaranteed to win, the nonprofits got Aaron Peskin and five other supervisors to back a measure that took away the mayor’s power over housing, economic development and small business assistance.

That was a huge power grab. A ballot initiative whose chief function was as a “poison pill” to defeat Props P and U had become transformed into a vehicle to take away Mayor Lee’s core powers for the three full years remaining on his term.

I noted at the time that Peskin and the nonprofits first tried to play “Let’s Make a Deal” with the mayor. When that failed they resorted to “blackmail.” But Mayor Lee would not give in. Prop M became the most sweeping assault on mayoral power in modern San Francisco initiative history.

The fourth attack on mayoral power—David Campos’ initiative to create a “Public Advocate” position– is the only one that needed to be on the November ballot. Campos was term-limited out and wanted to continue public service by creating a new position he could then run for. Had Campos’ Prop H been the only one of the four on the November ballot, San Francisco’s November election would not have been defined around mayoral power.

Mark Farrell also sought to use a ballot measure for the wrong reasons. His Prop Q promised a camping crackdown despite the city’s new Department of Homelessness and Supportive Housing already moving to eliminate tents on sidewalks.

Farrell misunderstood Gavin Newsom’s playbook from 2002, in which the former D2 Supervisor used a strategy to house homeless people (Care Not Cash) as a launching point for a mayor’s race. Newsom’s plans actually provided resources to get homeless persons housed; in contrast, Farrell’s Prop Q was a political gimmick that Beyond Chron and the SF Chronicle joined in condemning.

Supervisor races were uneventful. The only race that most considered in doubt was in D11, where Ahsha Safai overcame a massive negative campaign to defeat Kimberly Alvarenga. This led to conventional wisdom—which I disputed— of a so-called “moderate” takeover of the Board; my own view is that Safai’s victory replaced a supervisor often hostile to Mayor Lee with a progressive who will work with the mayor to benefit D11.

The Kim-Wiener race was the only San Francisco election prediction I got wrong. I explained Why Wiener Won and would add two points since writing that a week after the election.

Second, Wiener’s barrage of negative advertising hurt Kim badly among Chinese-American voters. She did worse among this demographic than was expected.

Kim’s defeat means that in San Francisco’s two recent top-tier “progressive” v. “moderate” clashes—Campos-Chiu for State Assembly in 2014 is the other—the progressive-backed candidate lost. Progressives should be asking why—as it’s not simply due to being outspent.

There was a reason Mayor Lee faced no serious opposition in November 2015, and this did not change with some bad poll numbers due to the Division Street encampment process. The mayor’s core Chinese-American base has remained loyal to him. They did not like that supervisors chose this particular mayor—the city’s first Chinese-American mayor—to push for limits on mayoral power they did not seek under Newsom, Brown or their predecessors.

In a brilliant move by Tony Winnicker (a Lee aide who took a leave to work fulltime on the campaign), the four anti-mayor measures became a joint No on D, H, L M campaign. Winnicker made it easier for voters to remember by labeling them “Dumb, Harmful & Lots of Money.”

Few non-elected progressives were excited about these four ballot measures, but Lee was not about to spend the next three years losing most of his power. This led the Mayor’s allies to raise millions for the No on DHLM campaign. When you give campaign whiz Ace Smith that much money on issues where the “yes” side does not even have independent field campaigns, victory is likely.

In addition to money, Props D,H,L,M also brought volunteers.  Prop M made most employees at the Mayor’s Office of Housing and Community Development (MOHCD) and Office of Workforce and Economic Development (OEWD) reapply for their jobs; that became a powerful incentive for workers to spend weekends and evenings campaigning for No on M.

The money and volunteer efforts coming in for No on DHLM boosted Wiener at Kim’s expense. Progressive supervisors made a terrible mistake putting these four anti-mayor measures on the same November ballot with the Kim-Wiener race.

2016 ends with San Francisco in despair. The city’s current problems seem small in the context of Trump’s potential wholesale attack not simply on LBJ’s Great Society programs, but FDR’s New Deal. The city is unified in protecting immigrants and other potential Trump targets, but this unity could quickly break down if federal budget cuts force San Francisco to make tough choices over which federal programs to locally back fill.

2017 offers a new set of challenges. We will begin exploring them when we return to publishing new material on January 3

Randy Shaw is Editor of Beyond Chron. Get inspired this holiday season by reading his two most recent books, The Activist’s Handbook and The Tenderloin: Sex, Crime and Resistance in the Heart of San Francisco.