San Francisco 2015: The Year in Review 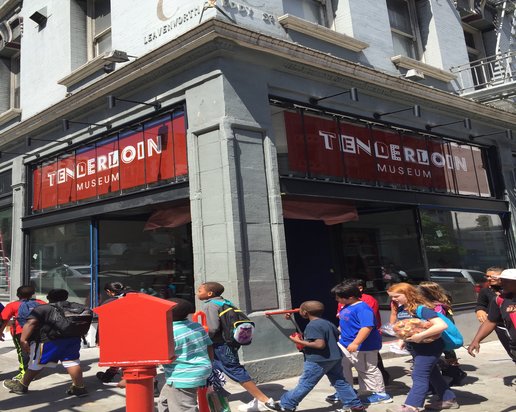 The Tenderloin Museum opened in 2015

In 1995, Willie Brown’s rescued the city from the far too conservative accidental mayor Frank Jordan;

In 2000, district elections brought grassroots progressives like Chris Daly and Aaron Peskin to power, overthrowing the Brown-dominated Board of Supervisors;

In 2003, Gavin Newsom narrowly beat Matt Gonzalez in the city’s most exciting mayor’s race ever;

In 2015, the city’s housing and eviction crisis dominated the political landscape as never before, reigniting a progressive movement counted out even by some of its own supporters.

San Francisco politics in 2015 laid the policy groundwork for the city’s 2016 priorities. This dynamic is seen in Mayor Lee’s already launching a bold new direction on city homeless policy, and in efforts by Lee and the Board to increase affordable housing requirements for private developers.

It’s All About Housing

Having worked to stop displacement and evictions since 1980, I have often been frustrated by the lack of public attention to these issues. It took the worsening crisis of 2015 to put rising rents, evictions, tenant displacement, and the need for more affordable housing at the top of the city’s political debate.

Aaron Peskin rode the affordable housing crisis to victory in the D3 Supervisor’s race, while his opponent downplayed and misjudged the issue’s potency among voters. Peskin backers saw his election as “sending a message” to Mayor Lee that he needed to do more on housing, ignoring that the Mayor led the effort for passage of a $310 million affordable housing bond on the same ballot (after also securing a $1.3 billion affordable housing Trust Fund in 2011).

Many progressives deem Lee’s collective actions—which include his record allocation of local dollars for affordable housing, public housing rebuild, funding for Ellis eviction legal defense, efforts to pass Ellis Act reform in Sacramento and his implementing a Small Sites Acquisition Program that stops Ellis evictions and vests ownership in Community Land Trusts—as woefully inadequate. They see the mayor as worsening the housing crisis by opposing the Mission Moratorium (Prop I) and short-term rental reform (Prop F), which were both defeated by voters.

Mayor Lee has allowed every tenant measure passed by the Board to become law. But many progressives remain convinced that Lee has not used all of his powers to address the crisis.

Consider the response to Aaron Peskin making headlines on December 15 by introducing legislation to bypass Costa-Hawkins and extend local rent control to post-1979 constructed buildings. Progressives cheered this as the type of bold, “outside the box” step that San Francisco desperately needs. But based on similar cases over the past three decades the chances are between zero and nil that a Court of Appeal would uphold such a local violation of state law.

If Mayor Lee had proposed a measure that flatly contradicted state law, progressives would vilify him for offering tenants false solutions; but in the oppositional world of San Francisco politics Peskin’s action drew praise.

Progressives also showed their need to be seen as going a separate direction from Lee when Jane Kim introduced a June charter amendment raising inclusionary housing requirements to 25%. This figure was based on a TODCO poll showing 70% support for such a figure, a similar result to the TODCO poll last February which found the Mission Moratorium had 65% support (it got 42% in the November election; David Campos’s legislative effort led the mayor to earmark $50 million in the housing bond for the Mission).

Kim’s action coincided with the first meeting of the mayor’s Housing Work Group, a large assemblage of stakeholders convened to reach consensus on a November ballot measure to address the same issue. Despite the apparent conflict, past experience shows that all sides will come together at the end.

Next to the housing crisis, San Francisco in 2015 should be remembered for dramatic progress in the Tenderloin and Mid-Market’s revival.

In 2015, these areas saw the opening of the Tenderloin Museum, the ACT-Strand, and Dolby’s new headquarters. PianoFight opened in the former Original Joe’s space on Taylor (it had a soft December 2014 opening)  and The Chairman, a popular food truck, finally opened its retail operation in Little Saigon. Too many new bars and restaurants opened on Geary Street in the Tenderloin to list, and more are on the way.

CounterPulse, a community arts, dance and cultural space, was supposed to open in its new space at the former Dollhouse Theater at 80 Turk in November. Unexpected electrical problems delayed the opening, which is now projected for March.

Construction begin in full swing at the long-delayed Market Street Place shopping center at Market and Mason. This project, approved pre-Twitter and  once seen as central to Mid-Market’s revival, is finally going to happen.

As with city housing policy, 2015 laid the groundwork for further economic revival in Mid-Market and the Tenderloin next year. Here’s what to look for:

*the game changing 826 Valencia open its writing programs and new retail store, King Carl’s Emporium, at the corner of Golden Gate and Leavenworth;

*the Black Cat restaurant at Eddy and Leavenworth (across from the museum) opens in June;

*the new “Big” bar at the corner of Turk and Taylor opens in spring, and a major renovation of the long troubled Warfield Hotel above the bar will be completed.

*Onsen, a Japanese Spa and Tea Room, opens at 466 Eddy next May;

*Space 236, a gallery at 236 Leavenworth to market the work of Tenderloin artists, opens to the public in January;

*Roy Choi and Daniel Patterson’s new organic fast food restaurant Loc’l on the southwest corner of Turk and Taylor is also expected to open in 2016.

*The Hibernia Bank renovation is 99% complete and space should be leased soon;

The Tenderloin will also finally see completion of the 2007 Tenderloin-Little Saigon Plan returning Ellis and Eddy to two-way streets. The new streetlights won by the mayor in the CPMC negotiations will also start brightening the Tenderloin next year.

Some associate the Tenderloin’s new businesses, rising rents on vacant apartments and future market rate housing projects as signs of its imminent “gentrification.” But people have been wrongly predicting this about the Tenderloin since 1980. There has not been a single “no fault” eviction in the Tenderloin since records began being kept in 2000; Ellis Act evictions are not an issue in the almost universally large Tenderloin buildings.

The Tenderloin has always had surprisingly high rents, which is why so many families with children live in studios and small one-bedroom apartments. Keep in mind that when the media talks about Tenderloin rents, they are not including the 33%-40% of neighborhood housing off the speculative market.

This lack of fear over displacement explains why Tenderloin SRO tenants have led the fight for safer streets and improved quality of life. They know they will be here to get the benefits. I have worked with SRO tenants in the Tenderloin since 1980 and am happy to report they are better organized today than ever before.

All of this progress would bring great joy to my longtime mentor, Leroy Looper,  who died in 2011. Looper’s purchasing the Cadillac Hotel in 1977 began the Tenderloin’s long journey not to respectability—which the neighborhood has never sought–but to its historic status as a safe, mixed-income neighborhood whose streets were filled day and night.

The Tenderloin Museum opened underneath the Cadillac, and Leroy’s wife Kathy puts on the wonderful Cadillac Hotel concerts. And as everyone raves in 2015 about the revived Boeddeker Park,  it’s Leroy’s son Esan whose direction of the Boys and Girls Club has helped make the park a success.

2015 was a major step forward for the Tenderloin and Mid-Market, and 2016 will be even better.

And with open seat supervisor races, a State Senate contest and a pack full of planned ballot measures, 2016 will be another memorable year in San Francisco politics.

Have a safe and healthy New Year!

Randy Shaw is Editor of Beyond Chron. For fun holiday reading and to learn why the Tenderloin will remain primarily low-income in a city of increasing wealth, get his new book, The Tenderloin: Sex, Crime and Resistance in the Heart of San Francisco.