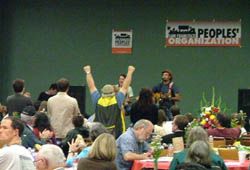 Several hundred people representing a vast array of communities, causes and organizations packed St. Mary’s Cathedral Saturday for the founding convention of SF People (SFPO). What could have been the stage for power struggles and policy arguments became instead a demonstration of the profound unity on principles shared by our city’s progressive community. The event, a day full of rousing speeches, caucuses on issues and identities, and musical performances, culminated with attendees passing a sprawling, ambitious policy agenda without a single dissenting vote.

Creating this agenda, along with the expansion of SFPO’s Board of Directors, represented the ostensible goals of Saturday’s event. But throughout the day, something perhaps more important occurred – activists discovered allies they didn’t know existed, received inspiration and ideas from colleagues, and seemed willing to bury past differences in the hopes of building a progressive movement with clearer goals, greater numbers and a unified front.

For some, this all served to make Saturday more than just a founding convention, but the beginning of something much bigger.

“You look at change throughout history, from civil rights to environmental justice,” said Supervisor Ross Mirkarimi, speaking at the convention, “and it wasn’t politicians who got it done. It was the activists. Today is about more than just policies and agendas – it’s about the beginning of a revolution.”

Along with this hopefulness came concrete accomplishments. Attendees of early-morning, primarily identity-based caucuses voted in 15 new members to SFPO’s Board of Directors, expanding it to a body of 22 people. Board newcomers included a diverse array of activists, including Religious Witness for Homeless People’s Sister Bernie Galvin, Teachers for Change’s Jeremiah Jefferies, labor and LGBTQ activist Howard Wallace, and others.

The Board’s diversity reflected the diversity of convention attendees, which included community representation from across San Francisco, including Bayview-Hunters Point, the Mission, Chinatown, South of Market and the Tenderloin. The Board’s diversity may prove essential to SFPO’s success at moving forward a truly city-wide progressive agenda.

The convention also took major steps toward defining exactly what that agenda will be, formulating a variety of resolutions and platforms during issue-based workshops that occurred throughout the day.

The workshops took on some of the most important issues facing progressives, including furthering the LGBTQ agenda, environmental justice, organizing labor, tenant’s rights, and urban planning. Moderated by a handful of prominent activists, the workshops worked much like brainstorming sessions, with attendees voicing ideas, concerns, and legislative possibilities related to each workshop’s topic.

Following these brainstorms, the groups consolidated and articulated everyone’s contributions into the form of resolutions. At the end of the day, the entire convention voted on these resolutions, passing every one unanimously.

These resolutions, which will make up SFPO’s platforms on a variety of issues, ranged from general principles to specific policy suggestions. Resolutions included winning labor rights for sex workers; reforming the rent board; giving the City’s youth more of a say in their education; creating a new bus riders’ organization; working towards more community planning; and building cheaper and greener affordable housing.

Most everyone, including long-time activist Richard Marquez, dubbed the event a success.

“We came together to unite ourselves against the political pit bulls that have been mauling the working class for years,” said Marquez. “We left feeling energized and committed to resist all attacks.”

However, as high as hopes ran throughout the day – including one attendees’ belief that it could have been the strongest attempt at progressive unity in thirty years – one important question remained on everyone’s mind; what would happen next?

As SFPO moves forward, hopefully capitalizing on the energy built up from Saturday’s convention, the answer will define the organization. If SFPO can transform newfound unity among progressives into tangible results, Mirkarimi’s prediction of revolution may not be too far off the mark.