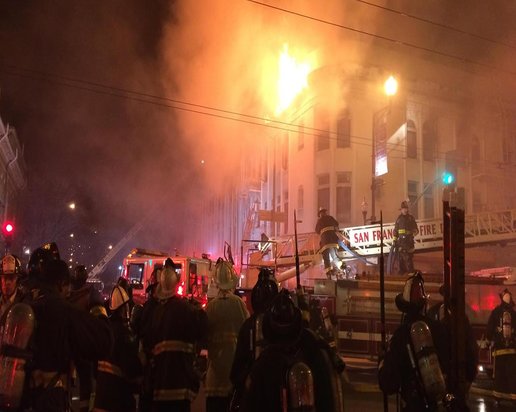 Last week’s fatal Mission District fire displaced dozens of tenants. It should finally motivate the SF Board of Supervisors to do for apartments what it did in 2002 to stop SRO fires: require sprinklers inside living areas.

The Mission fire is one of  an increasing number of such tragedies. It was quickly followed by a fire that displaced 18 tenants at 642 Hyde Street and then a Saturday fire that damaged 17 rental units in Alamo Square.

Fires are displacing tenants and endangering their safety. Fires are the leading cause of damage or destruction to the city’s rent-controlled housing stock, costing far more buildings than are lost via voluntary demolition.

Yet when it comes to tenant safety, San Francisco mandates seismic retrofits for soft-story buildings but does not require sprinklers in apartments. This is true even though far more tenants have been displaced by fire than by earthquakes.  and the cost of sprinkler installation is far less than that of the mandated retrofit.

So why has the city addressed the soft-story threat while ignoring the far greater risk of fire? The answer, not surprisingly, is politics.

After a spate of SRO hotel fires that left hundreds homeless, my organization, the Tenderloin Housing Clinic, spearheaded the enactment of a city law in 2002 requiring sprinklers in SRO rooms. Previously, as with apartments, sprinklers were only required in common areas.

As our legislation went through the hearing process, SF Fire Department officials asked why apartments were not also to be covered by the new law. The answer was twofold.

First, there had not been a lot of high-profile apartment fires that displaced tenants.

Second, and far more importantly, supervisors either did not want to fight with landlords or did not feel they could overcome apartment owner opposition to a new sprinkler requirement.

SRO owners have nowhere near the political clout of apartment owners. Unlike apartment owners, they have long been fair game for new city mandates regarding their business operations.

But only in the seismic retrofit area has San Francisco imposed new code requirements on apartments. And while the new retrofit requirement for soft-story buildings covers only a small portion of the city’s apartment stock, a sprinkler law would impact all apartments.

That requires Supervisors to potentially alienate thousands of owners. And if the “progressive” Board majority that passed the SRO sprinkler law was not inclined to require apartment sprinklers, the current “moderate” majority is even less interested in battling with their landlord supporters.

To be clear, supervisors may have avoided battling landlords over apartment sprinklers because tenant groups were not pushing the issue. Tenant groups didn’t see the lack of sprinklers in apartments as endangering the city’s low-income housing stock as we did with SROs.

But two new factors should prompt the Board to address the sprinklers in apartments issue.

First, skyrocketing rents on vacant apartments means that most of those displaced by fires will have to leave their neighborhood, and likely San Francisco. The city has a “Good Samaritan” law allowing landlords to “temporarily” house fire displacees at below-market rents, but there is little evidence that law has prevented longterm tenant displacement from fires.

Apartment tenants are now in the position of victims of SRO fires: they are unable  to obtain permanent housing elsewhere in San Francisco.  It routinely takes two years for fire damaged buildings to get back on line, and displaced tenants have few if any San Francisco options during this period. This should make stopping fires through an apartment sprinkler law a city priority.

The second new factor is that the city’s short-term rental law allows potentially all apartment units to be used as tourist hotels 365 days a year. Yet while tourist hotels are required to have sprinklers in each habitable room, tourist rentals through Airbnb or another host are not covered by this mandate.

True, tourist hotels represent an entire building while Airbnb is using structures that are primarily residential. Yet San Francisco has made all apartment buildings potential tourist lodgings, so a lower standard of fire protection should not apply to this class of tourists.

Landlords could have mobilized to defeat the soft story retrofit law, but did not do so. A major reason is that insurance companies were requiring such work.

The same may soon occur, if it is not already, among fire insurers. Fire insurance companies could get sprinklers in apartments without any city mandate; all they have to do is make this a condition of issuing insurance on apartment buildings.

There are many ways the city could craft an apartment sprinkler law that could bring landlords on board.

For example, if fires predominate in wood frame buildings, perhaps they should first be brought under the law and its impact then evaluated before going further. It might also make sense only to require sprinklers in kitchens, as that is where fires are most likely to start. I know that newly constructed buildings have far greater fire protection mandates, so they might be exempted from any law. I’m sure experts in the fire protection field can craft a logical compromise.

Here is what I know for sure: only sprinklers put out fires. Alarms and smoke detectors do not.

And these sprinklers must be in individual apartments to put out fires. Hallway sprinklers do not do the job.

The SRO sprinkler law has been an amazing success. It does not stop fires from starting, but it puts them out.

I know of egregious examples where tenants have set fire to their room and the sprinkler still confined the blaze to that one unit. After a wave of SRO fires prior to 2002, sprinklers caused the problem to virtually disappear.

Landlords and tenants both lose from fires, as the insurance reimbursement to owners rarely covers the actual replacement cost. It’s time for the Board to bring both sides together to stop apartment fires from displacing tenants and costing some their lives.