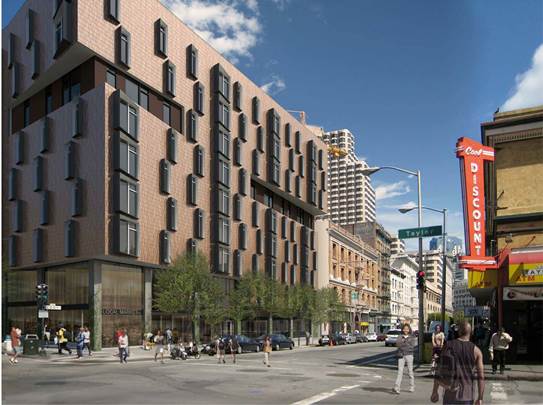 Contrary to popular belief, San Francisco is making real progress in preserving economic diversity and resisting gentrification.  New developments in the Mission, Tenderloin, and HOPE SF’s public housing rebuild are all part of this success. Overall, the combination of nonprofit housing acquisition, increased housing supply and city-funded tenant legal protections has slowed a gentrification process that many still wrongly believe is “inevitable.”

Opponents of the 2011 Mid-Market/Tenderloin tax break for new hires insisted that this would absolutely turn the Tenderloin into an upscale enclave. Instead, according to Rent Board stats, five years later displacement through “no fault” evictions in the Tenderloin has been nonexistent. No Tenderloin building has seen the mass displacement of low-income tenants and their replacement by “the gentry.”

As I describe in The Tenderloin: Sex, Crime and Resistance in the Heart of San Francisco, the Tenderloin avoided the inevitable fate of gentrification through a combination of regulation and nonprofit acquisition. This process continued in 2016.

In the last six months, nonprofits have acquired two corner sites previously entitled as market rate housing (101 Hyde and 180 Jones are in city hands awaiting nonprofit RFPs). An SRO half block from the Hilton on an allegedly “gentrifying” block (the Winton, 445 O’Farrell) opens this week as housing for homeless veterans and others.

TNDC recently acquired 500 Turk (at Larkin), the current Kahn & Keville garage. It will be a major new affordable housing development right on the Tenderloin’s border.

TNDC finally breaks ground on its Eddy/Taylor family housing project next summer. It’s been entitled since 2009.

With almost every buildable site now taken, those anxious over Tenderloin gentrification really need to focus on the neighborhood’s real problems.

The Tenderloin’s biggest challenge for decades has not been a risk of gentrification; to the contrary, the Tenderloin is a working-class neighborhood long suffering from a lack of investment, not an excess. In the past two years, the Tenderloin Museum, PianoFight, CounterPulse arts space, 826 Valencia Tenderloin Center, the Black Cat, Onsen Spa and Japanese restaurant and The Saratoga all opened. The stubborn reluctance to open businesses in the Tenderloin is gone, and the neighborhoods  low-income residents are on the verge of getting the safe and healthy neighborhood they have long deserved.

With books, movies, and a deluge of media covering the Mission’s gentrification, it’s recent success creating new housing opportunities for the poor and working-class is overlooked. As with the Tenderloin and other communities facing gentrification across the nation, the Mission’s recent experience shows the power of activism to slow if not halt the upscale transformation of economically diverse neighborhoods.

The Mayor’s Office of Housing recently awarded a key site at 16th and South Van Ness to a nonprofit team of Mission Housing Development Corp. and Bridge Housing. This site was entitled by a for-profit developer who would have built market-rate condos. The city paid $18.8 million for the entitled site, which will now become affordable rental housing.

I don’t know if its a San Francisco first, but it’s the first time in my memory that an entitled condo project became nonprofit affordable housing. The $18.8 million acquisition cost is on top of the $50 million that Mayor Lee committed to spend in the Mission out of the November 2015 $310 million affordable housing bond.

The project once described as the “Beast on Bryant” ended up winning unanimous Supervisor approval after the developer dedicated a portion of the site for 136 units of nonprofit affordable housing. Housing whose construction the mayor’s office pledged to fund. New nonprofit developments are also moving forward at 17th and Folsom and 1296 Shotwell.

Mission activists have pretty much made 25% inclusionary the law of the neighborhood. That’s what Lennar has agreed to provide at 1515 South Van Ness, which is before the supervisors today.

And there’s more. Mayor Lee’s Small Sites Acquisition Program has primarily benefited the Mission, stopping the displacement of dozens of longterm tenants. The program is permanently preserving buildings as rental housing that would otherwise have become ownership. Voter approval of Prop C last week will provide additional funding for this vital anti-gentrification strategy.

Like the rest of San Francisco, the Mission’s single family home prices and rents on vacant apartments remain unregulated. That ensures that new Mission residents will continue to be more affluent than their predecessors. But in terms of what actually can legally be done to slow gentrification, Mission activists have made enormous progress in recent years.

Thanks to support from Mayor Lee, David Campos can leave office next month knowing that the engine of nonprofit housing development returned to the Mission on his watch.

San Francisco has gotten national attention for its out-migration of African-American residents, but little spotlight has been placed on the city’s rebuilding its largest supply of African-American family housing: public housing via HOPE SF. No city has devoted the resources San Francisco has done to secure the longterm future of this vital affordable housing supply.

We’re talking about over 2400 newly built public housing units and 3,380 newly renovated homes through the Rental Assistance Demonstration (RAD) program.  Quite remarkable and a legacy for Mayor Lee, who grew up in public housing.

Mayor Lee’s HOPE SF program likely gets less attention for two reasons. First, by protecting African-Americans from displacement it conflicts with the city’s urban renewal narrative. Second, projects like Sunnydale, Hunters View and Alice Griffith are outside the “ring” neighborhoods where the city’s gentrification is most visible.