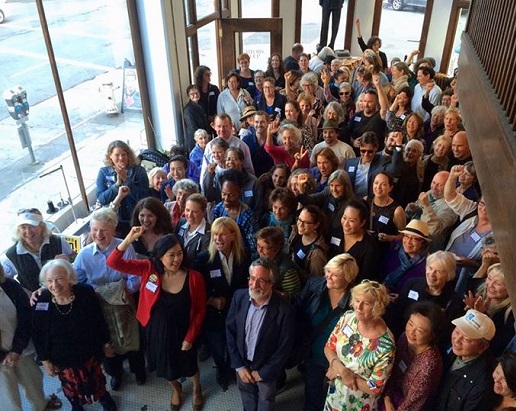 The November 2015 election has already proved that an uncontested mayor’s race does not mean a boring ballot. To the contrary, many see three high profile races—the D3 Supervisors race, Prop F (short term rentals) and Prop I (Mission moratorium) as impacting the very “soul” of San Francisco.

While Prop A, the $310 million affordable housing bond, is the most important San Francisco ballot measure, it appears to have avoided opposition. Absent unforeseen circumstances—certainly possible with two months to go—Prop A is headed for the 2/3 vote needed for passage.

Prop A has gotten little attention compared to prior bonds. This is likely due to Mayor Lee’s central role in making it happen, and the campaign being chaired by SPUR’s Gabe Metcalf. Neither are popular with some affordable housing advocates, and Lee’s  progressive critics are loathe to credit him for assembling the coalition that should produce the first housing bond victory since 1996.

For those keeping score, a Prop A victory will mean that Lee will have delivered both a bond and a $1.3 billion dollar affordable housing trust fund before the end of his first full term as mayor. He also has had the city allocate over $15 million for a long overdue Small Sites Acquisition Program, which has turned buildings facing Ellis Act evictions into permanent affordable housing.

Critics claiming Lee only cares about housing for the rich need to get their facts straight.

The big candidate race in November is in D3.

After Mayor Lee in January picked Julie Christensen over Cindy Wu to fill the District Three Supervisor’s seat vacated by David Chiu, I wrote, “Peskin immediately becomes the favorite to win in D3. He has the backing of 8 Washington opponents (D3 strongly opposed the project) as well as nearly all voters concerned about protecting tenants.” Two months later  (“The Return of Aaron Peskin”) I explained why Peskin’s candidacy had proved even stronger than I anticipated.

Today, I think Aaron Peskin has run the best race of his political career and one of the best supervisor’s race ever run since the return of district elections. He has taken advantage of three key factors.

First, Chinatown activists have made electing Peskin a top priority. They see the neighborhood’s future at stake—-with Christensen raising fears over her agenda.

Peskin won without much Chinatown support in 2000, but had it while a supervisor. He has gone from being estranged from Chinatown activists after the appointment of Ed Lee as mayor in January 2011 to the enthusiastic favorite of the Chinese language media and prominent community leaders.

Supervisor Aaron Peskin always delivered for Chinatown. He is a known commodity to Chinatown residents. They trust him. Peskin’s support in D3 was so strong in 2000 that he won without Chinatown support; he now has it more than ever.

Second, Julie Christensen has completely mishandled the Chinatown community.  Instead of aligning herself with Chinatown activists who strongly backed Cindy Wu, Christensen has gone out of her way to pick fights.

Case in point: a new co-working space on Chinatown’s Grant Avenue. After the Chinatown Community Development Center and Cindy Wu in particular challenged the office use as a zoning violation, Christensen intervened on the tenant’s side. Christensen aide Kanishka Burns even helped the tenant seek to circumvent the zoning.

Christensen already had the support of those wanting to weaken Chinatown zoning laws. Her intervention in weakening key land use protections for the neighborhood provided the smoking gun for Chinatown activists to justify an all out campaign to defeat her.

In addition to his increased support in Chinatown and Christensen’s missteps, Peskin has benefited from a political mood that is unhappy with the city’s rapid changes. This is the perfect climate for Aaron Peskin. His chief political identity is as a voice for preserving San Francisco’s past. Nobody has been more vigilant than Peskin in pursuing this agenda in North Beach, Chinatown, the Waterfront and Telegraph Hill.

This confluence of factors has turned Peskin’s campaign into an electoral crusade. If a voter of any political persuasion wants to send a message to City Hall about change, Peskin rather than a mayoral appointee is the vehicle. And unlike past insurgent efforts that only captivated the city’s left, Peskin has always had support from people not associated with the “progressive” camp.

I’ve heard from Christensen supporters saying that the polls look good for her and that she is on track for victory. We’ll see. From my vantage point, D3 is going with Peskin.

Prop F: Save Our Neighborhood!

After Mayor Lee and the Board of Supervisors screwed up short-term rental legislation not once but twice, voters now face a choice: keep current law or replace it with Prop F. Those upset over “ballot box planning” should blame City Hall for not enacting the handful of changes that would have either prevented Prop F from going to the ballot or ensured its defeat.

First, Airbnb has focused on Prop F’s “neighbor suing neighbor” provision (which gives neighbors legal standing to sue neighbors for short-term rental violations) and this is primarily what its campaign will be about. As I previously foresaw in raising concerns about Prop F’s complex provisions, an initiative is only as strong as its weakest link. This “neighbor suing neighbor” provision– Airbnb has wisely realized that voters don’t want their neighbors poking into their lives and even suing them– is the weak link. It was not necessary to ensure enforcement and its inclusion imperils Prop F’s chances.

Second, both sides believe that voters who care about preserving neighborhood character will vote their way.

I’ve always felt that the strongest argument against the city’s current short-term rental law is that it brings tourists into neighborhoods whose zoning otherwise prohibits tourist use. Yet perhaps recognizing this vulnerability, Airbnb’s campaign is arguing that Prop F’s reduction in short-term rentals will have major negative economic impacts on neighborhood businesses.

Will this neighborhood economic impact argument prove convincing? Those tracking Prop F should be looking at whether neighborhood businesses are posting signs for or against the measure, as that could prove telling.

I’ll analyze the prospects for Prop I, the Mission moratorium, on Thursday.